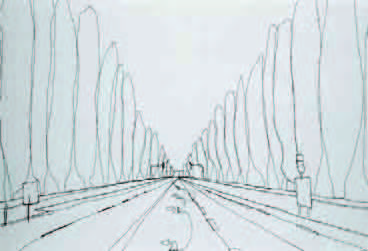 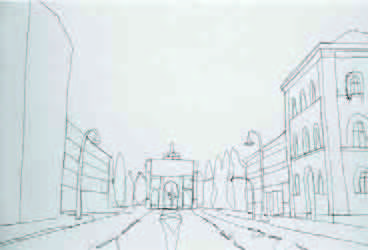 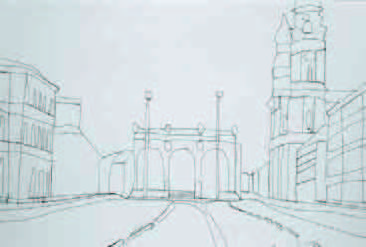 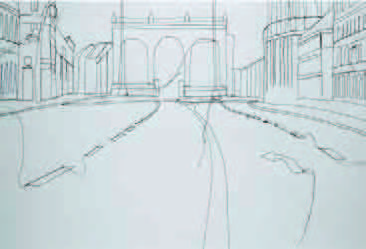 
This edition of On-Curating.org is accompanied by an artistic contribution by Michaela Melián. The sewn drawings have a double connotation as their initially harmless messages contain mysterious political subtexts revolving around perverted communities and group formations, with specific reference to historical events.

The drawings for Strasse are close to the project Triangel. They both relate to Bernward Vesper’s novel The Journey (1972) in which he describes his childhood on the Triangel estate in the Lüneberg Heath, his travels, and politicization in the postwar period. The drawings produced using a sewing machine were done from photographs taken driving through Germany, in the Lüneburg Heath (Heimat-museum Neukirchen, Bergen-Belsen Memorial), on German free-ways, and sites in Munich (Odeonplatz, Hofgarten, University, High-Fish-Kommune, Frauenkommune, various of Fassbinder’s film locations): The continuous machine-sewn black thread follows the outlines of landscape, buildings, and roads.

Vesper was the son of the nationalistic right wing folk poet Will Vesper. Substantial parts of his autobiographical work Die Reise [The Journey] record his childhood, school years and youth in the seemingly idyllic town of Gifhorn in the 1950s as well as his suffering under the authoritarian regime in his family in the village of Triangel.

Then he began studies of German and Sociology at the University of Tübingen. During that time he met Gudrun Ensslin, the later RAF terrorist, with whom he went on to establish the publishing house Studio Neue Literatur in 1963. On 13 May 1967 their son Felix was born in Berlin. The relationship with Ensslin broke up soon afterwards, when she met Andreas Baader and left Vesper in February 1968. Nonetheless, when Ensslin faced court for her arson attacks on the Kaufhaus shopping centre on 2nd April 1968, he stood as a witness to call for a mild verdict.

In autumn 1969 Vesper began to travel throughout Europe. He began writing his novelistic essay The Journey but was unable to complete it. The autobiographical fragment, in which Vesper incorporates the relationship to his father, his own radical political convictions as well as his experiences with drugs, was not published until 1977. It is regarded as one of the most influential representations of the generation of 1968 and an important historical document.

Two projectors project slides of the sewn drawings superimposed on each other, creating an impression of a film composed of stills, a kind of road movie. The soundtrack to the slide installation is based on an excerpt from the album Disaster (1973) by the band Amon Düül which grew up around Kommmune 1.

Michaela Melián, artist and musician, lives in Munich and Hamburg. She studied Music and Art in Munich and London. 1980-1986 she co-edited the magazine Mode und Verzweiflung in Munich. As a musician she is a member of the band F.S.K. She has lectured and held lectureships at the Academies of Art Berlin-Weissensee, Munich, Nuremberg, Vienna, Stuttgart, Bratislava, Städelschule Frankfurt, at the Bauhaus University Weimar, University of Lüneburg, at the Goldsmiths College London and the Office for Contemporary Art in Oslo. 1998 and 1999 she was Visiting Professor at the Academy of Art in Munich, since 2006 she has held a Visiting Professorship and since 2010 a Professorship at the Hochschule der Bildenden Künste Hamburg.

THE FRENCH DEBATE ABOUT THE COMMUNITY

ON THE CONSTRUCTION OF A 'COMMUNITY OF EQUALS'

THE IMAGINARY AND THE ABSENCE OF COMMUNITY. REFLECTIONS ON AN ELUSIVE CATEGORY

BEING OTHER, BEING DIFFERENT: A NORMATIVE GAP IN THINKING THE 'IMPOSSIBLE COMMUNITY'?

The Imaginary and the Community. Deliberations Following the Deconstructivist Challenge of the Thinking of Community