A New Home for Trampoline House

The house is a gathering place for displaced people as well as Danish citizens and international residents who think that the Danish asylum and refugee policy has become too tight, and who work for a more humane and inclusive refugee policy in Denmark together. Trampoline House is a lumbung member for documenta fifteen.

Thamy Matarozzi: The first piece of information we read about the Trampoline House was that it had closed quite recently. What led to this and what will happen with Trampoline House now? Are you still structuring the project, but without a base?

Morten Goll: The problem of living in an asylum center is that you don't feel at home. You don't feel that you have the right to be in society, because you've actually been excluded, physically. In asylum centers, even with doors open, one cannot feel like a citizen. One of the most important aspects of Trampoline House was that we had a physical place. If you have a territory, you can change the rules. So, I don't think that the Trampoline House is possible without a physical space or territory.

When the house went bankrupt, it was a complete loss of all the opportunities that we had, and I think we're still traumatized by it. People are lamenting the loss of the house on social media and continuously asking for its reopening. Fortunately, today the first informational meeting for volunteers for a new house took place, which we are opening next week [01/22/2022]. It is going to be a smaller venue in the congregation halls of a migrant church. The priest's idea of how to work with people and what culture is, is very similar to the way Trampoline House operates.

Nadine Bajek: How was Trampoline House funded? What was the reason the funding ceased in 2020?

MG: We have ten years of fundraising experience and have tried different organizational schemes. In the beginning of a project like that, you will easily find philanthropic foundations to support the development phases. As soon as a project becomes operational, they lose interest.[1] Many projects only work for the first three years because they have not found a way to create their own revenue and reach sustainability.

Since we were aware of the abovementioned dynamic, we worked for several years to gain governmental support. After all,Trampoline House was doing integration work by offering people networks, language classes, and a lot of activities that are related to integration. This should match the interests of the Danish state. We managed to receive partial funding from the state for two years[2], until the government went through substantial changes under immigration minister Inger Støjberg[3] in 2015.

After the cancellation of governmental support, we tried to find private donors that could help us survive—we managed to raise one million Danish krone (c. €135,000) almost every year from 2016-2019. But it wasn´t enough. In 2017, we received funding from two major Danish foundations,[4] to develop Trampoline House as a service provider to the municipal job centers, which are in charge of the integration process. But collaboration with an overpowering institution comes at a price. We were trying to walk the line between being able to work with the public administration and still maintain our identity as Trampoline House. And eventually you could say that we did not manage to convince the Danish welfare state that we were worthy of their collaboration, since we insisted on giving voice and opportunity to the rejected asylum seeker.

We wanted to keep the house as a place of radical democracy, one that allows people to develop in their own direction. In that sense, it is very important to understand the difference between institutional democracy, which allows the encampment of refugees, and the culture of democracy that we promote. Trampoline House democracy is a culture of critique, providing tools of how to improve society.

NB: How does funding under the new organization, the Weekend Trampoline House, work?

Now, we want to navigate Weekend Trampoline House in a different direction and develop it as a much smaller operation. To run it, we need approximately 750,000 DKK for one year, which can be collected from smaller foundations who believe in the original idea of Trampoline House. There will be no conflict in including rejected asylum seekers, because we don´t need to please the government or any municipality.

NB: How do you see your relationship to the global art discourse, and what role should collectives have in it?

MG: Trampoline House is an artwork with multiple authors. The global art scene is embedded in the patriarchal structure, which demands a hierarchy of single authorship versus multiple audiences. What if the artwork is made by the audience? What if Trampoline House was created and is recreated every day by all the people who have ever worked and work in Trampoline House. When we were invited to documenta fifteen, it was the community of Trampoline House that was invited. So, how do we define the artistic identity here? We need to start thinking of a feminist notion of collective authorship that is challenging the patriarchal order of the neoliberal capitalist society. I clearly see some potential here.

Anna Wälli: How is Trampoline House organized, and how have you tackled cultural differences?

MG: One important instrument is the weekly house meetings, a social gathering, where everybody is seen and acknowledged. The house meeting allows direct deliberative democratic discussions. Unlike representative democracy, it’s the democracy of those who are present. We always used this talking stick I brought home from a trip to Utah. (MG shows object with feathers). Talking sticks have been used for thousands of years in Native American communities to organize democratic discussions, where everybody is equally heard. We want to show our community that democracy can exist in many different ways. Of course, we also use…  say Danish or Congolese democratic traditions. What is important is that people in the room understand that their diverse cultural backgrounds are welcome and heard, and that we will build our improved democracy from these common sources.

AW: Which structure did you use to organize the people working at Trampoline House, and how is the new project governed?

MG: In the new organization, the board is no longer self-supplying, as it was for the independent institution of the first Trampoline House. Now, we have created a temporary association with the purpose of launching a Weekend Trampoline House and the presentation for documenta. The ideal solution should be an association where the members (volunteers and supporters) elect the board amongst themselves. We tried this structure in the first Trampoline House, but it disintegrated within three months, because the people who came from the camps did not prioritize showing up at the meetings, were deported to faraway camps, or were even sent back to their countries of origin. With a community this volatile, the more stable Danish participants gained too much power in the decision process. That's why we developed the “house meeting” as the immediate democratic fora of those who are present today. Due to this nature, the house meeting actually often ends up like a collective therapeutic process, re-establishing identities through establishing community. The house meeting is also the backbone of Weekend Trampoline House.

AW: How will you take part in documenta fifteen, in the whole process as well?

MG: At first, we thought we couldn't participate since Trampoline House was gone. By losing the house during the corona lockdown, we partly lost touch with our community for over a year. But the artistic team of documenta fifteen, ruangrupa, suggested relaunching it in a sustainable way. We agreed and began working on Weekend Trampoline House. But the next problem was representation at documenta. People who live in Danish camps are not allowed to go to Germany. So, the very invitation by documenta reveals a latent conflict, and its base of unequal privileges.

We have to find ways to represent this conflict and Trampoline House’s response at documenta fifteen. As a collective, we are planning a series of workshops and events, like a fashion show titled In a closed world – visible and invisible walls, or a theater workshop giving voice to the people of the camps, titled The Chain, or building life-sized self-portrait dolls of the people who can’t travel to Kassel, titled The Puppet Workshop. It’s an exciting process, and I have to say we are grateful for the invitation to documenta. Given our collective authorship, I´m not sure we would have received recognition from the Danish art scene without it. We are at a cross section. We are in between, but it's a super creative place to be.

This interview was conducted on January 21, 2022, via Zoom, and has been edited for length. 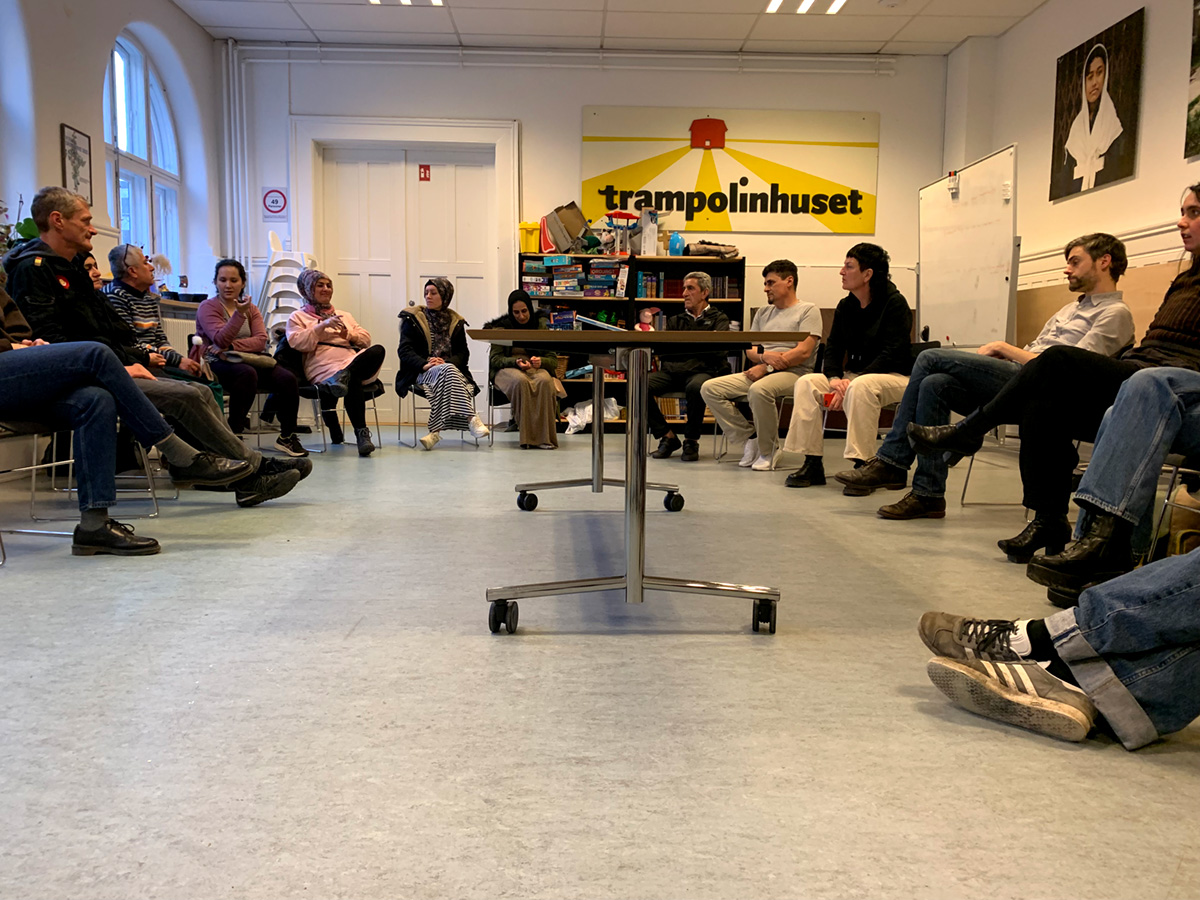 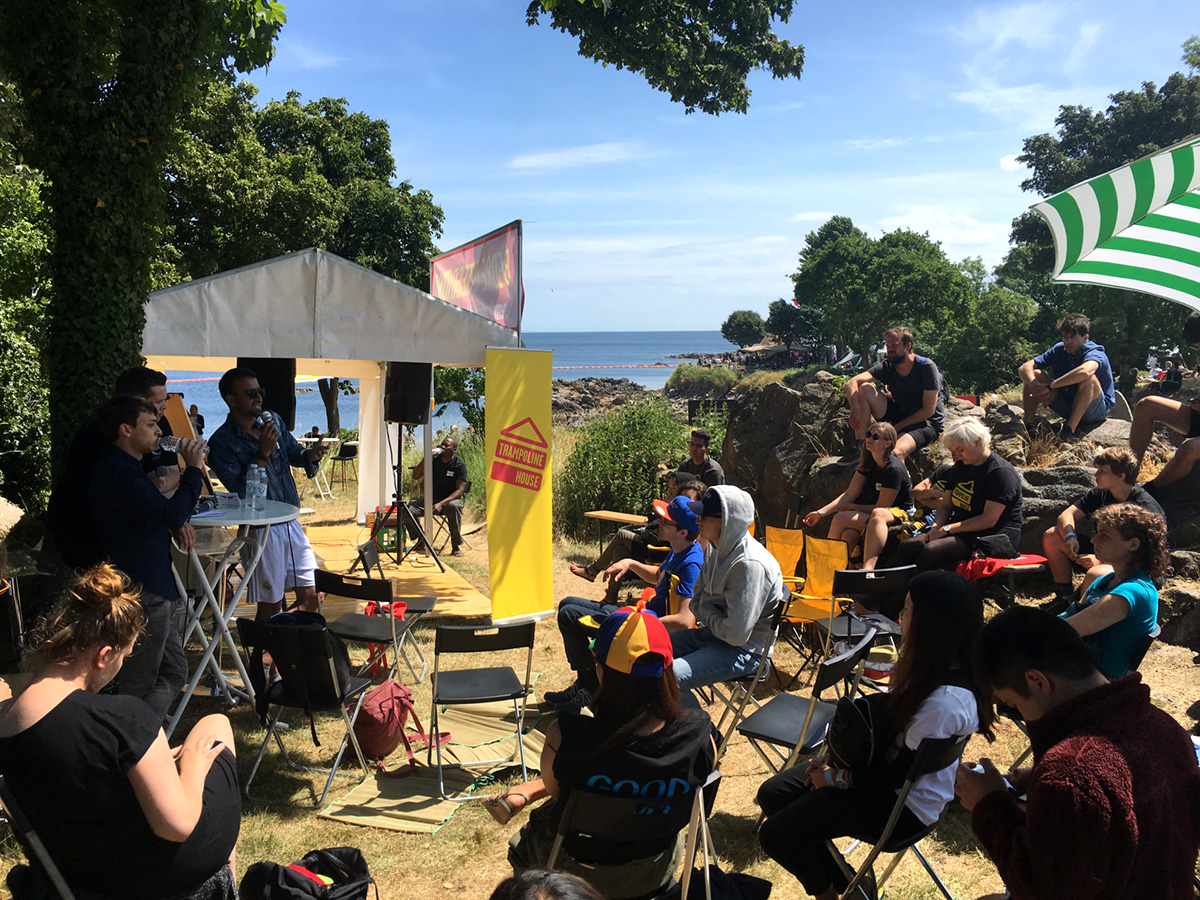 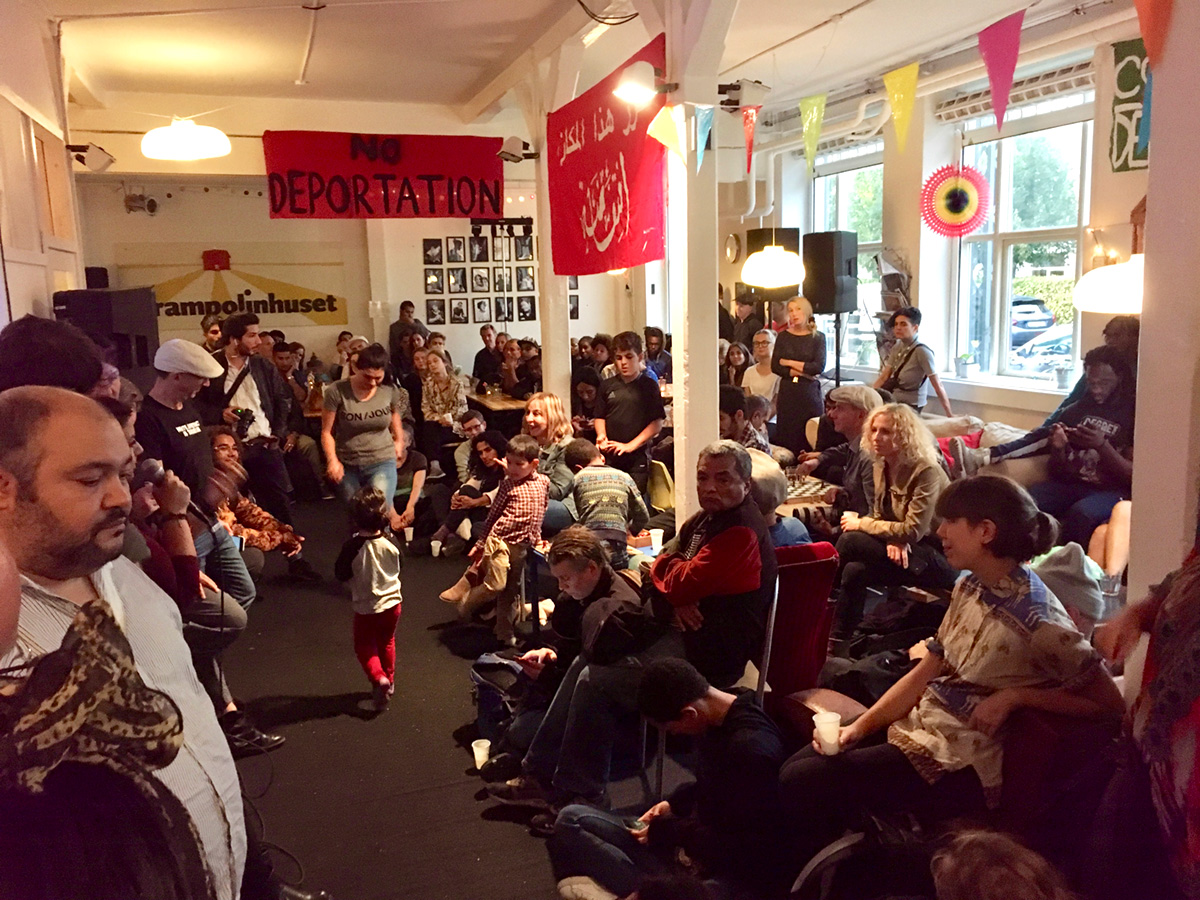 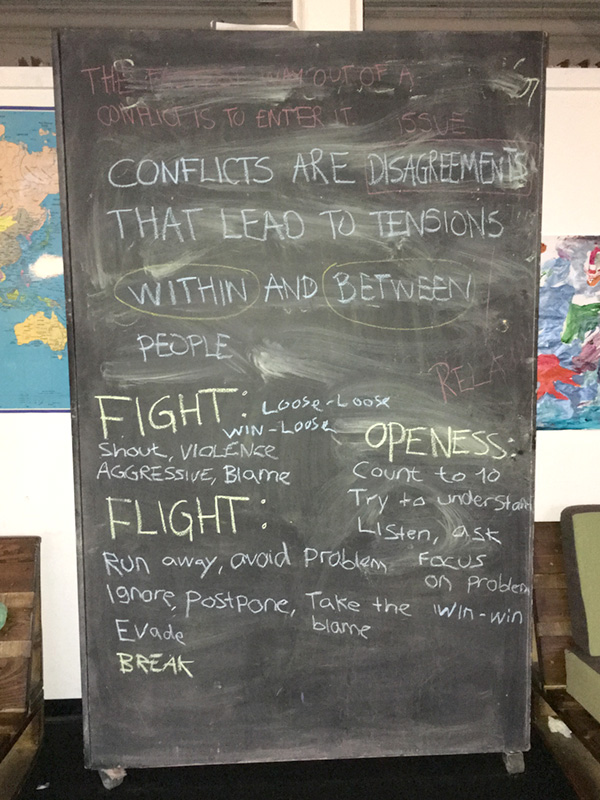 Morten Goll is a socio-politically inspired artist working with social platforms for political change. He is presently the general manager of Weekend Trampoline House, and co-founder of Asylum Dialog Tank (2009), where asylum seekers and Danish artists, art students and others conceptualized Trampoline House. Established in Copenhagen in October 2010 by more than 100 volunteering asylum seekers and Danish asylum activists, Trampoline House was in operation until December 2020 as an independent institution. Weekend Trampoline House is a reconstruction, continuation, and development of this non-profit, self-organized, user-driven community center, where asylum seekers, Danish citizens, and anybody else can meet, share experiences, and learn from one another on equal terms.
https://www.trampolinehouse.dk/

Thamy Matarozzi is a creative producer with background in art, cinema, and cultural studies.

Nadine Bajek is a curator and exhibition manager with a background in event production and cultural studies.

Anna Wälli is a curator and project manager with a background in art, history, and literature.

[2] Trampoline House´s main sponsor from 2014-15 was the national fiscal budget.

[3] Inger Støjberg was the integration minister of Danemark from 2015-2019. In 2020 she was impeached for lying to the parliament as a minister of integration, in one particular controversial case from 2016, where she enforced an illegal practice, allowing to indiscriminately separate married couples in the camps, if one of them were under 18 years old. For this offense she was sentenced to 4 month of unconditional imprisonment, which she is presently serving.

documenta fifteen—Aspects of Commoning in Curatorial and Artistic Practices

The Exhibition as a Washing Machine? Notes on Historiography and (Self-)Purification in documenta’s Εarly Εditions

The History of Conscious Collectivity Behind Ruangrupa

by Wulan Dirgantoro and Elly Kent

We need to talk! Art, offence and politics in Documenta 15

documenta fifteen’s Lumbung: The Bumpy Road on the Third Way: Fragmentary Thoughts on the Threats and Troubles of Commons and Commoning in Contemporary Art and Knowledge Production

by Tanya Abraham and Maayan Sheleff

by Séverine Marguin and Dagmar Pelger

Art-based Commoning? On the Spatial Entanglement of Cultural and Urban Politics Through the Example of Project Spaces in Berlin

On the Ideological Flexibility of the Cultural Common(s): The Many Lives of Thailand’s Art Lane

Feral Atlas and the More-than-Human Anthropocene

Commoning: Environmental Reconciliation in the Work of Common Views

Public Movement. The Art of Pre-Enactment

by Grégoire Rousseau and Nora Sternfeld

In Conversation with Anastasia Baka, Leilani Lynch, and Anna Wälli

in Conversation with Leilani Lynch and Maria Mumtaz

in Conversation with Sophie Brunner, Marinella-Sofia Gkinko, and Maria Mumtaz

A Defibrillator for the Independent Art Scene: OFF-Biennale Budapest

in Conversation with Smadar Samson and Giulia Busetti

Thinking Beyond the Donor Economy: Collectivity as the Answer to the Question of Funding

A New Home for Trampoline House

In Conversation with Marina Donina and Regina Tetens