7 February 2020, the long wait has ended. Shedhalle has a new curatorial team: Thea Reifler und Philipp Bermann will be the artistic directors of Shedhalle from 2020-2025, in collaboration with a curatorial board (Lucie Tuma, Isabelle Vuong, Michelangelo Miccolis) and the general manager Miriam Haltiner. They will put into practice their concept PROTOZONES which aims to establish Shedhalle as an institution for process-based art. Reifler and Bergmann have been working together in the fields of opera, visual arts, film, music theatre and performance since 2013. Their work locates in the intersection of artistic and curatorial practice which is part of Shedhalle’s institutional genome as well. But as every microorganism, the Shehalle has mutated throughout the last decades and will find a new shape under Thea Reifler and Philipp Bermann’s direction. After the announcement, they took the time to give us some insights into their process of “prototyping” in and “contaminating” the Shedhalle - and how the process is still a process.

Arianna Guidi, Jose Cáceres Mardones, Myriam Boutry: Why did you choose Shedhalle, and what do you see in this institution for the development of your practice?

Thea Reifler and Philipp Bergmann: Shedhalle is a shapeshifter that has transformed many times since it was founded and has given space to try out formats and forms of curating. It is and always has been a very dynamic institution that for some years has had a pioneer function thinking about exhibition-making. We found that idea of an institution that challenges and reinvents itself very appealing. It strongly resonates with our idea of how we deal with our own work.

We think this particularity of Shedhalle is connected to a long history of working with artists as curators. And we as well actually have been working mostly as artists (performance, opera, installation, film) in recent years. Some of our artistic works had strong elements of a curatorial practice—as they often included several art forms and many different groups of people. It is exactly that intersection that we find exciting. And now, with Shedhalle, we can expand and develop our practice within an institutional framework.

Furthermore, Shedhalle is deeply rooted in left culture which we grew up with. Nowadays, most of our ideas and concepts rise from our connection to a queer-feminist culture. This is also why we applied together with a curatorial board (Michelangelo Miccolis, Lucie Tuma, and Isabelle Vuong)—each of them will curate one protozone a year. That might sound like a phrase, but we want to create a diverse program that is also not only shaped by us.

Finally, we also fell in love with the space the first time we saw it. We showed a piece right next to it at Zürcher Theater Spektakel last year. During that time, we started to envision the possibility of working with this space. Now, we are very grateful for the opportunity that was given to us, thrilled to start working and already full of ideas and formats that we want to develop there.

AG, JCM, MB: For Shedhalle, you are proposing to develop a concept called “Protozonen”—could you explain this concept as a format of exhibition-making? And tell us more about what inspired you to come up with this concept?

TR&PB: We want to dedicate our time at Shedhalle to process-based art: forms of art that focus on the process of creation with all its unfolding possibilities, uncertainties, surprises. The protozone is a format we developed to exhibit process-based art. It should combine the classical exhibition format with processes that take place in or around that exhibition. You can imagine it like an exhibition that opened one week too early. There are artworks installed, but some are in the making. Some of the artists are still present, and you can get in contact with them in different ways.

The first couple of days of each protozone we envision as a moment of intensity—we call it the “high-intensity-phase”: different parallel processes going on during days and nights in a flow of events and shared experiences. After that, a “low-intensity and residency-phase” follows: there will be occasional public events and opening times, but the space will also be used as a non-public working space.

What inspired us was “prototyping”—a term that is mostly used in science, programming, or design, referring to the establishment of a first functional draft of an idea. A prototype comes into existence exactly in the process of the making. We connected it to “zone” as a specific shared time-space of an exhibition. “Protozone” also echoes a biological term: “protozoan”—a micro-organism. Our vision is that the protozone lives and is shaped in a shared process between its related parts.

The protozones will not only involve people from international and local art scenes, but we will as well collaborate with people working in future technologies, science, and local initiatives engaged in social, ecological, and technological change. The idea is that different people, materials, and their processes find their own ways of becoming, relating, and co-existing in the space like in a temporary ecosystem—thus creating space to think and experience together, to shape together.

(As you maybe already see, we are strongly inspired by thinkers like Donna Haraway, as well as feminist utopian science fiction writers like Marge Piercy and Octavia Butler.)

AG, JCM, MB: Technology, migration, ecology, and identity are going to be, according to the press release published by Shedhalle, at the core of your programming. Those topics already have a history at Shedhalle—what are the challenge for those topics today? How do you want to bring them to Shedhalle?

TR&PB: Those topics have a history not only at Shedhalle, but in every cell of the world :) For us, those topics sum up the large processes present in our lives that are entangled in very complex ways and because of that often evoke a sense of helplessness. How we would like to approach them is from a perspective of complexity, adaptability, and agility—we want to open this perspective of moving with these processes and participate in shaping them rather than being overrun by them. This is why we put process-based art at the center of our work at Shedhalle. Process-based art focuses on acting in the here-and-now, in relation to others and to the environment. In other words: together with artists, scientists, activists, and the audience, we would like to train to swim in the currents of crisis, reality, possibilities, and every unknown.

What is your next exhibition called?

TR&PB: First, we will start with smaller “Pilots”. We will show Nile Koettings performative exhibition “Remain Calm (Reduced +)” during Zurich Art Weekend and workshops by Lilly Pfalzer and Isabelle Lewis during the Fleshy Interface Festival that was initiated by Theater Neumarkt.

Then, End of October, coinciding with the 40th birthday of Rote Fabrik, we are planning to open the first Protozone. “Fun” fact: in the very beginning of this year, the title we came up with for our first exhibition in Shedhalle was CONTAMINATION. Back then, we were thinking about it in the sense of contaminating Shedhalle and Zurich with the protozone and with process-based art. Now, the meaning has changed completely under the new influence of coronavirus (another micro-organism)—this is a good example of how one process is related to another; in this case, how our working process is related to the global spreading of a virus.

We kept the title, but made an addition: CONTAMINATION/RESILIENCE. Which systems have been "contaminated" - are coming to an end or are currently undergoing change? Which toxic structures have been contaminating us? In view of this, what could make future societies and ecosystems resilient in the long term? This Protozone brings together concepts, practices and artworks that combine science fiction with eco-feminist approaches, thus provoking new and hopeful ways of thinking about the future —a thing we find much needed in our dystopia-dominated culture.

Also, the members of the curatorial board are starting smaller projects already this year, as their “Pilots” so to say. Right now, facing the corona crisis, they are especially focusing on  formats that take its effects on the (inter-)national art scene into account. You will hear about all of that very soon ;) Our multiple coming-outs at Shedhalle are—of course—in process. 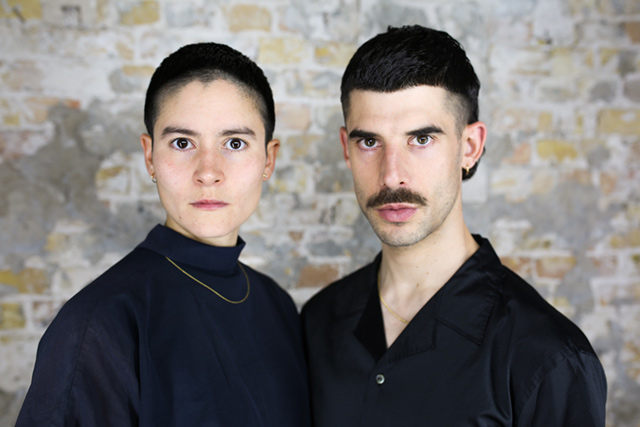 Thea Reifler and Philipp Bergmann have been working together as artists, directors, and curators in the fields of opera, visual arts, film, music, thea- tre, and performance since 2013, most recently in Berlin. Their process-based works and interdiscip- linary projects are inspired by queer-feminist the- ory and practice and have been shown at Hambur- ger Bahnhof - Museum für Gegenwart (Berlin), 3HD-Festival - Kunsthaus Bethanien, Berghain, Hebbel am Ufer (Berlin), NOWY Teatr (Warsaw), Mousonturm (Frankfurt), Zürcher Theater Spektakel (Zurich), Hellerau - European Centre for Arts (Dres- den), SPIELART-Festival (Munich), Opera Darm- stadt, Sophiensæle (Berlin), et al. From 2020-2025, Thea Reifler and Philipp Bergmann will be the artis- tic directors of Shedhalle Zurich. With their con- cept PROTOZONES 2020-2025, they want to esta- blish Shedhalle as an institution for process-based art.

Jose Cáceres is a historian and independent curator. He is a lecturer and researcher at the University of Zurich, developing a decolonial critique to the idea of history from a Latin American perspective. Recent projects include the intervention Chile Despertó with Impresionante (Chile) at Volumes 2019, the documentary exhibition Chilean Revolt. A Chronicle at la_cápsula and Walmapuex situ in collaboration with the collective Trop cher to share. He is enrolled in the Postgraduate Programme in Curating, MAS ZHdK.

Arianna Guidi is a designer and curator originally from Rome. She studied art and design in the Netherlands and holds a MA in Contemporary Typographic Media from the London College of Communication. After working with various leading branding and design agencies in London and Amsterdam as a creative designer and consultant, she started her curatorial practice which focuses on language and miscommunication, multicultural perspectives and encounters. She is now studying in the Postgraduate Programme in Curating, MAS at the Zurich University of the Arts (ZHdK).