Right after the rebuilding in 2012, some fundamental contradictions came to light at the Löwenbräukunst Zürich. The once promising alliance of art dealers, big business, and public authorities has recently become increasingly disastrous for the art conglomerate. But also the Shedhalle Zürich, located on the lake in the middle of the cultural center Rote Fabrik, has also been in crisis for some time. Precisely these two art venues, the Löwenbräu-Areal and the Shedhalle, formed the two most distinctive poles of a booming Zurich art scene in the 1990s. This article is the prelude to a thematic focus on the online art magazine Brand-New-Life in which we take the current mood of crisis at the Löwenbräukunst and the Shedhalle as an opportunity to look back on the developments in the art scene in the 1990s and at the same time to ask how the conditions and perspectives for contemporary art have changed in Zurich today. 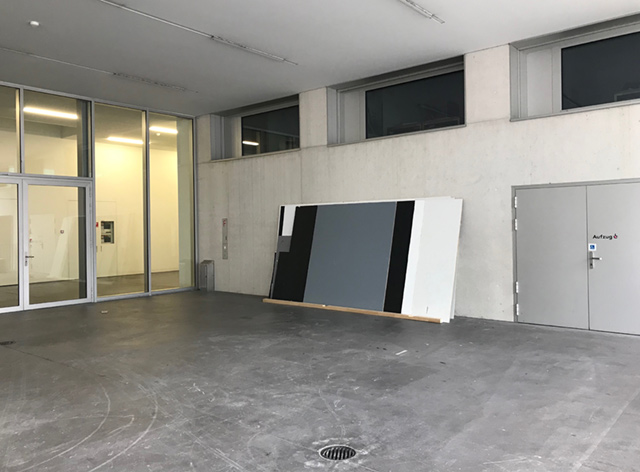 Renovations at the Löwenbräukunst Zürich, April 2019. Photograph by: Pablo Müller.

In the 1990s, Zurich experienced what amounted to an art miracle: numerous new galleries opened, the Kunsthalle was founded, the retail giant Migros launched its own museum, and countless self-organized art spaces made their mark on the Zurich art scene. Two ventures in particular drew international attention: the art conglomerate that was established in 1996 on the premises of the former Löwenbräu brewery and the Shedhalle that met with a highly controversial response after a programmatic reorganization. They constituted two poles in the then newly forming Zurich art scene: the Löwenbräu-Areal with its proximity to the art market on one side and the Shedhalle with its political program on the other.

The Löwenbräu conglomerate formed in 1996 by the merger of the privately funded Migros Museum for Contemporary Art, the publicly subsidized Kunsthalle, and a group of then young and now globally operating galleries (Peter Kilchmann, Hauser & Wirth, and others). Some had previously been located in the Schoeller-Areal, others elsewhere in the city. The joint location ensured greater visibility and better access (visitors could view multiple art spaces in one go) and promoted informal communication. The coexistence boosted a common self-understanding, and the ‘competitive’ situation resulted in mutual profile-raising. The Löwenbräu-Areal with its exclusive focus on contemporary art and the extravagant lifestyle the latter cultivated saw itself as a progressive force in contrast to the seemingly antiquated Kunsthaus Zürich. Regularly ending in wild parties, the exhibition openings at the Migros Museum for Contemporary Art were legendary.

On the other hand, there was the Shedhalle Zürich, located by the lake, in the middle of the cultural center Rote Fabrik. In 1994, a new operational concept took effect that allowed for a radical programmatic realignment. Instead of an individual curator, a team of three was to be responsible for the program. The Konzept 94 also called for a stronger thematic orientation, and the format of the solo exhibition was no longer considered desirable. The subsequently elected curatorial team consisting of Renate Lorenz and Sylvia Kafeshy (Stefan Banz resigned shortly after being elected) pursued a decidedly political agenda. Beyond any art market logic, current socio-political issues were discussed in, and based on, art, and a strong emphasis on discourse came to define the new Shedhalle. Both of those two poles, the different protagonists of the Löwenbräu-Areal and the Shedhalle scene, were extremely well networked internationally, highly agile and firm and vocal in expressing what they considered to be the relevant art of the present. Between the two ‘camps,’ there were occasional hostilities and public, quite productive controversies (e.g. the Jochen Becker/Rein Wolfs debate). 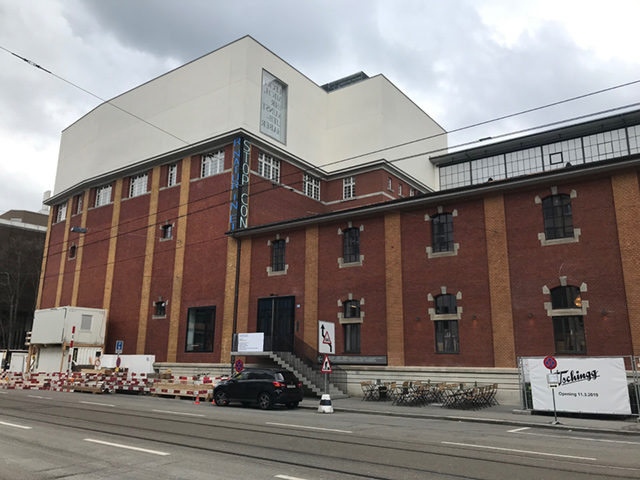 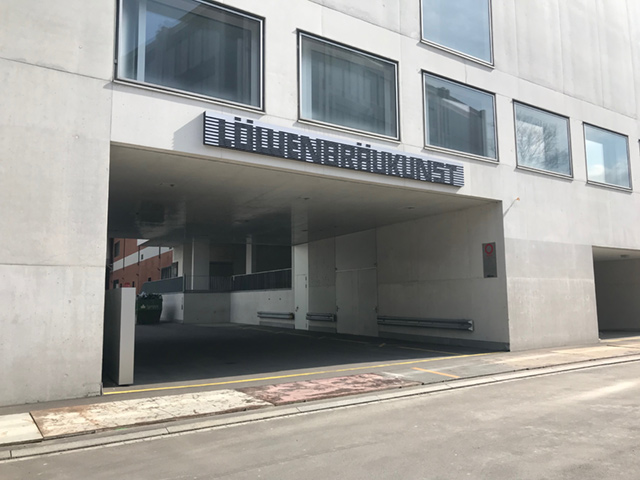 Renovations at the Löwenbräukunst Zürich, April 2019. Photograph by: Pablo Müller.

Today, none of the vitality of those days is left. The Shedhalle, currently led on an interim basis, holds a Leichenmahl [funeral meal] every last Thursday of the month. At these (semi-)public meetings, guests and other interested people talk about service agreements, budgets, and other general conditions and ask what aspects of the Shedhalle should be left to die or, alternatively, kept alive. At the Löwenbräu-Areal (today named Löwenbräukunst), the once nostalgic look back to, and celebration of, those glamorous founding years—most recently in the special issue of DU published in 2012 following the Löwenbräu-Areal reopening—has given way to seemingly desperate reanimation attempts. They now have an Open Day where they woo the public with guided tours, children’s events, and coffee and cake. Even the title of the performance event held for the second time at the Kunsthalle Zürich in 2018 (December 14)—Löwenbräu Lebt [Löwenbräu Lives]!—sounded like an attempt to conjure the last vital force of the Löwenbräukunst, especially given the fact that it was once again closed due to construction. 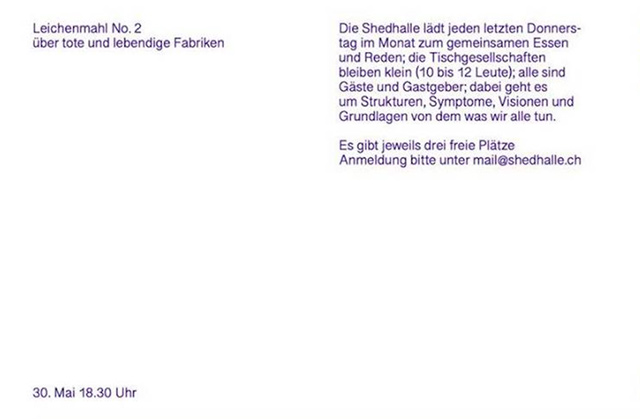 Leichenmahl No. 2, May 2019, Shedhalle Zürich Announcement

By the time its renovation was completed in 2012, a number of fundamental contradictions became evident at the Löwenbräu-Areal. The off-putting and anonymous atmosphere of the building due to the consistently identical concrete floors, white plaster walls, and neutral light is but the most obvious challenge of the new Löwenbräukunst. The once promising alliance of art trade, big business, and the public sector is becoming a curse for it. The initially still prevalent sense of community has vanished by now. As a result of the substantially higher rental and operating costs following the renovation, individual interests are coming to the fore. The smaller and medium-size players are forced to be more cautious in their calculating and have less leeway. The financially strong players, by contrast, are taking over more space or visibly losing interest in the Löwenbräukunst as a location, especially since it is but a sideshow in their international operations. The fact that there is no more sense of community is illustrated by the coffee bar, a long-standing desideratum that was to become a meeting place for both visitors and people working on the premises, which did not materialize. Meanwhile, LUMA does run a food and drink establishment with the schwarzescafé designed by the artist Heimo Zobernig, but it is not really dependent on regular operation. Instead, the multifunctional space is aimed at exclusive events and external private functions. And Tschingg, the pasta fast food restaurant that moved into the ground floor this year, is primarily frequented by students of the nearby vocational business school. In addition to this lack of a sense of community, an ambitious exhibition practice at the Löwenbräukunst is becoming less and less of a priority. Already with LUMA West (which moved in after the renovation in 2012), a strange mix of exhibitions, activities, private functions, and promotional events was added to the Löwenbräu-Areal. To this day, it is difficult to discern an artistic or curatorial concern in this disparate program supported by the LUMA Foundation. And with the recent move of two big departments of Migros’ cultural promotion, Migros-Engagement and Migros-Kulturprozent, into the Löwenbräukunst, the complex is moving even further away from active exhibition and art mediation practice. 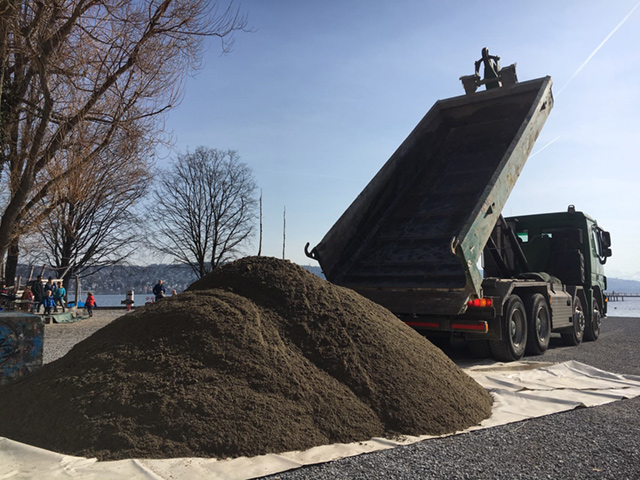 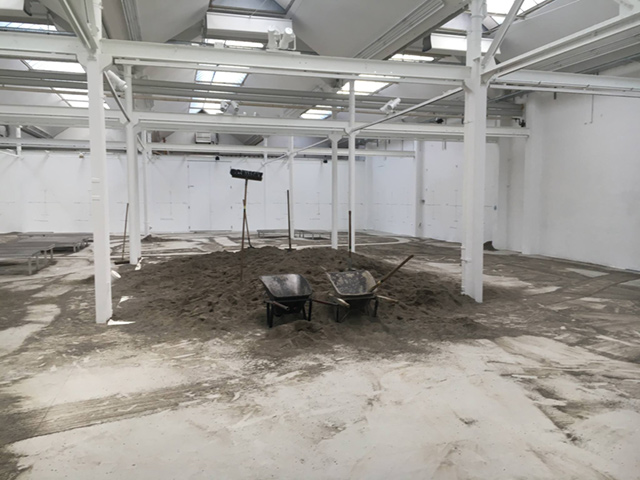 In the case of the Shedhalle, the institution got caught up in itself: persisting tensions and changes in the curatorial team, an awkward division of internal responsibilities, and disputes with the City of Zurich were accompanied by discussions about how the socio-critical educational practice developed in the 1990s could be translated into the present. While meant to be critical by those involved, this self-reflection led to a glorification of the 1990s and resulted in self-imposed standards. The unproductive self-preoccupation is particularly evident in the Shedhalle archive that was prepared in 2014–2017 and eventually put online. There, keywords of the exhibition projects of the 1990s—ranging from gender politics and pop culture to critique of technology—are uncritically adopted into the archival order. At the same time, this archive, while intrinsically intended for an interested public, largely defies meaningful use due to its confusing classification and unwieldy structure. This results in a paradox: essentially outward-directed and intended to encourage productive further thought, the archive becomes a symbol of institutional constriction und stasis.

However, a nostalgic look back at the Zurich ‘art miracle’ is hardly productive. Rather, the thematic focus, which started on Brand New Life at the end of 2019, takes the current mood of crisis at the Löwenbräukunst and the Shedhalle as an opportunity to look back on the 1990s in Zurich, and would like to formulate questions and approaches on this basis: What artistic strategies, theoretical debates, and issues that were negotiated at the time continue to be relevant and worth drawing on today? How have social and economic conditions changed in the past twenty-five years? What perspectives and new personal and institutional constellations are the result of this? In 2020, we will publish a series of essays on our online art magazine, and we invite anyone interested to participate in this open editorial process and contribute their ideas.

Pablo Müller studied fine arts at the Lucerne University of Applied Sciences and Arts and the Zurich University of the Arts (ZHdK), and philosophy, art history, gender studies, and history at the universities of Basel and Bern. After that, he worked at the Neuer Berliner Kunstverein n.b.k. and at the Adrian Piper Research Archive Foundation (APRAF) in Berlin. With a Fulbright Scholarship, he was able to do research at the Graduate Center of the City University of New York for one year, supervised by Claire Bishop. Since 2014, he has been working at the research group Design, Art & Public Spheres at the Lucerne University of Applied Sciences and Arts. He is a PhD candidate at the Institute of Art History at the University of Zurich, supervised by Prof. Sebastian Egenhofer. The working title of his PhD thesis is Art Criticism and Critical Contemporaneity: A Reading of the Art Journals October, Texte zur Kunst and Mute. Fields of research are artistic self-organization, economies of art, artistic writing practices, and art criticism. He also writes regularly in art magazines and newspapers, including Kunstbulletin, WOZ Die Wochenzeitung, Neue Zürcher Zeitung, and Jungle World, and received the R & R Prize for Art Journalism in 2011. Since 2015, he has been publishing the online art magazine Brand- New-Life together with Lucie Kolb, Barbara Preisig, and Judith Welter.