The following interview was done online, as many of our encounters have now been transferred to the virtual space. Elisabeth Eberle is an artist based in Zurich. She is mainly working with drawing and sculpture, but recently also her compilation, or archive, on the discrimination of female artists was exhibited.

Dorothee Richter: Elisabeth, you became an art activist fighting for better quotes for female artists in Zurich (and Switzerland). How did that happen? Was there a moment, a special event that made you wish to make the unbalanced gender relations in the Zurich art scene public?

Elisabeth Eberle: When I was managing an art space for an artists' association about ten years ago, the gender imbalance in the art scene was obvious. I analyzed the canton's funding activities on the basis of the culture report and published the (binary) gender-oriented figures in the association's magazine. Afterwards, someone in charge called and asked me why I was so upset, since there were also very few female university professors.

At an opening, I asked the government council responsible for culture for explanations. He was not aware of the situation. Stereotypical attempts at explanation followed, speculation about a low number of applications from female artists, etc.

In the meantime, museums and institutions were gradually publishing their collections and activities on the Internet, and the access to data became easier. The situation turned out to be more extreme than I had ever imagined. The more respected the institutions were, the worse the statistics.

DR: How did you start your public actions?

EE: My commitment was slow in starting but tenacious. I tried to make female artists aware of the situation and confront everyone with influence with the problem. Some didn't believe me, and many female artists actually believed that if they were good enough, discrimination didn't apply to them. Others were resigned or had accepted the status quo, had tired of the pointless effort and had ceased to even apply for exhibitions and grants anymore. I was told several times that feminism was out, and a young curator even confessed to me that she just found men better.

On top of that, I was also warned several times about criticizing decision-makers.

DR: How did you gain more collaborators in this?

EE: Through social media I learned about international initiatives and began to collect articles and publications on the topic, which grew into a small archive. I contacted some of the authors personally when I had something to contribute. I built a loose network of contacts, both nationally and internationally.

I regularly sent interesting discoveries taken from the art scene and from revised art history to a circle of committed artists and art historians, some of which were unable to disclose information because of their positions.

I posted my criticism directly to institutions, e.g. on Facebook, and received orchestrated support from other women* in the discussions.

In addition, I participated in panel discussion on the topic (e.g. Café des Arts), asked critical questions in public discussions and was also consulted by the press, blogs, and administrative offices for information. Political developments and published figures in the press (Brand-New-Life, swissinfo, and Tagesanzeiger) also backed me to discuss the topic publicly here.

Last year, the FATart in Schaffhausen, the only art fair in Europe for women*, asked me to exhibit my archive on a large wall and present it in a talk. Slowly but surely, my work as an archivist merged with that of being an artist.

DR: What action did you start, and how can the reader participate?

EE: Based on the city's mission statement regarding culture, I realized that almost 80% of the budget earmarked for art in Zurich goes to the Kunsthaus, where women* artists are highly marginalized (swissinfo 2008-2018: 15% women* artists in solo exhibitions, none in 2019).

Together with a culture blogger (Freya Sutter)and the artist and co-founder of FATart (Ursina Roesch), we launched an appeal to have postcards from individuals sent to the Kunstgesellschaft. They called for more women* artists and more diversity in the Kunsthaus Zürich, especially since the institution also has an educational mission to fulfill. Unbeknownst to many, governmental donors are actually in the majority on the board of the private museum association. I am convinced that the private sector on the art scene would immediately adjust to the circumstances if the flagships with public funding were to change their behavior. Clearly governmental involvement in contents of culture is problematic, but even corporates have social responsibilities. Because our intervention was not tied to a formal organization, it spread quickly across various groups (ZHdK, businesswomen*, doctors, the art scene, retirees, academics, etc.). According to our estimates, several hundred individually written postcards and letters were sent.

DR: What were the reactions of the institutions you addressed? I guess they can be very condescending? We once did an overview on the galleries in Zurich, the quota was easy to understand: the more successful on the art market, the fewer women* were in the program, even if one could mention that Hauser and Wirth played an important role in presenting Louise Bourgeois’s work to an international art community.

EE: Many reacted very condescendingly, mostly with the by now standardized, clichéd quality arguments or with the cost a change in course would mean, or just that there were fewer female artists.

Initially, there was almost subtle ad feminam criticism directed against me as an artist. That I was railing as a would-be victim—many had decided not to believe the statistics. I was denied the legitimacy as an artist to expose a system that judges me.

On social media, institutions immediately adapted their PR in response to criticism. Typically, muses and female patrons were trotted out to buffer possible reactions.

At a panel discussion, two influential museum curators pointed to the influence of collectors and the lack of academic treatment of women* artists as a reason for their absence.

Only when a journalist inquired did a Kunsthaus Zürich spokesperson admit to having received "a few dozen" letters, but on the basis of historical precedence saw no need for change

I was shocked by the reader's comments in the ensuing debate in the Tagesanzeiger, which I turned into an audio installation read by a computerized voice. The "museumability" of female artists is generally questioned in many of these opinions. I would never have thought that in 2020 gender or quota discussions in art museums could be such a provocation. Link to the audio installation Kai spricht, 2020, in German: https://vimeo.com/399409127 (code: kisskiss).

DR: How do you see race, class, and gender as intersectional aspects of discrimination?

EE: I am aware that collecting statistics focusing on binary gender distribution do not reflect the general prevalence of prejudice, but it is a good, strategic indicator. As a straight, white woman in contrast to People of Color and other gender modalities, I still have one foot inside the club of decision-makers and know their rites and perceptions. This gives me an advantage when I monitor their actions.

However, I would expect that those managing art institutions take steps to connect with varied publics and as a way forward, adopt policies that reflect a differentiated perception of society (like Tate, MoMA and others have already started to do). These would actually be the core and crucial functions of their positions even it might contrast with commercial forces that reinforce class-driven decisions. 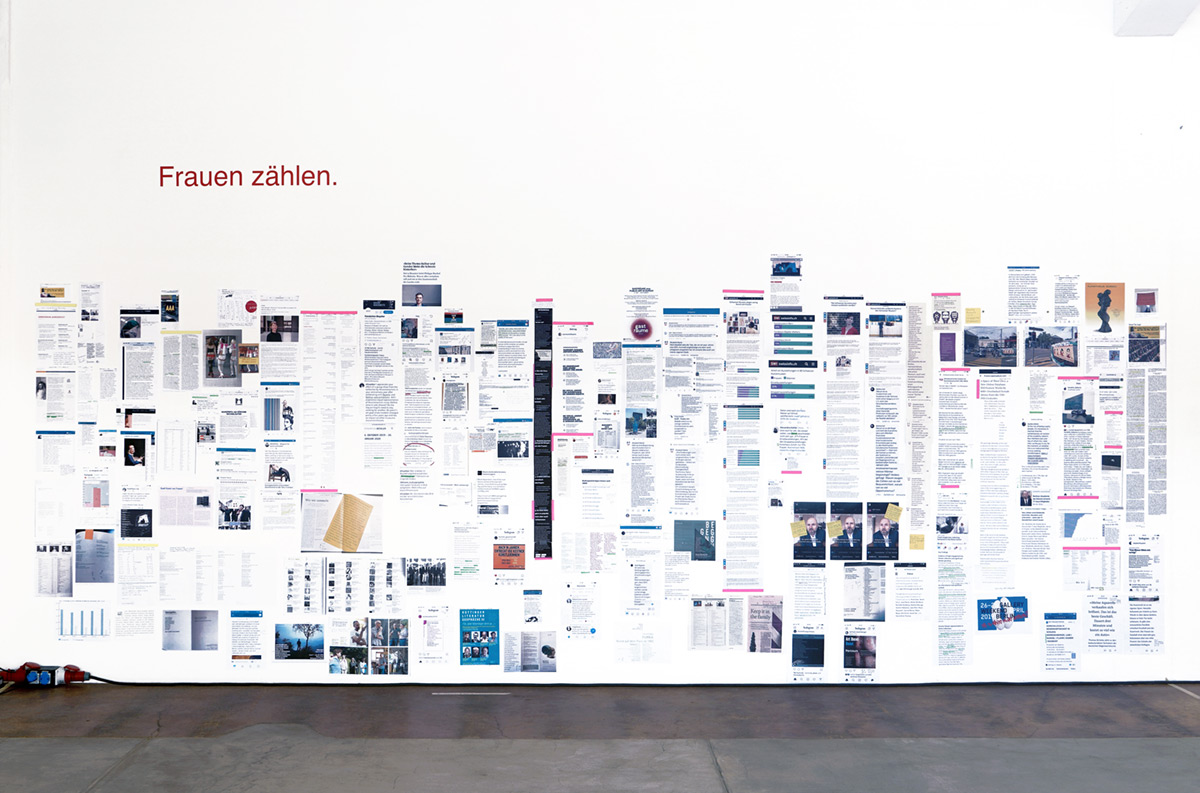 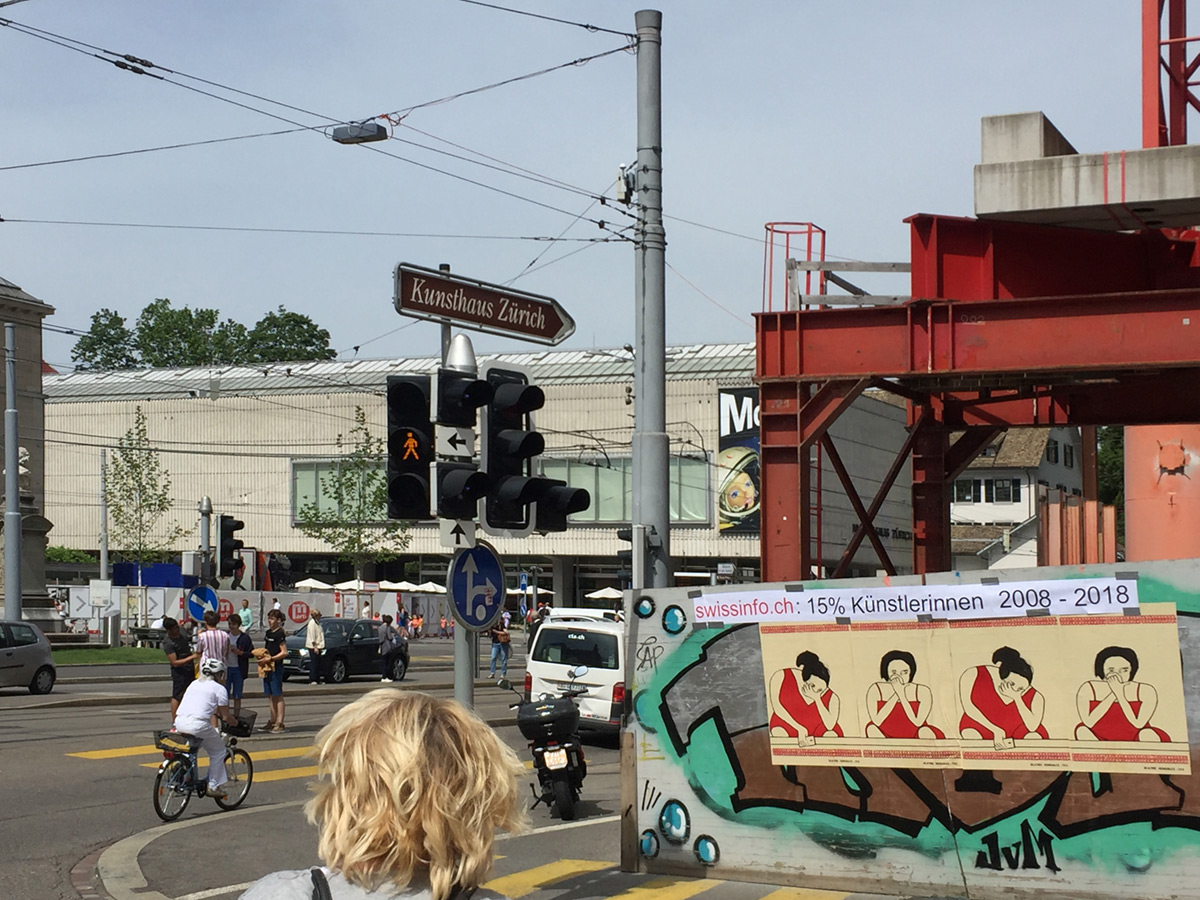 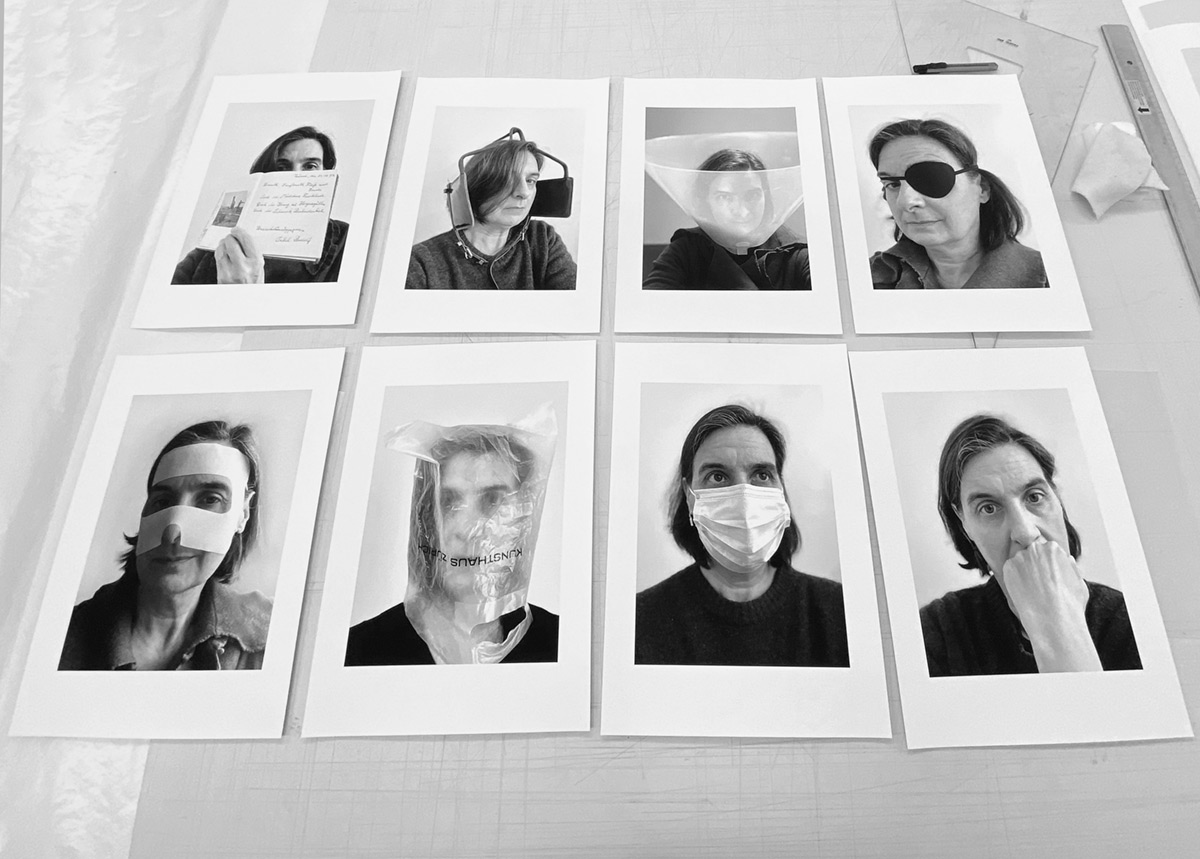 Elisabeth Eberle (b. 1963) is a Canada-born Swiss artist who lives and works in Zurich. In her work, she deals primarily with the intersection of nature and artificiality, mostly in drawings, videos, and sculpture. In recent years, she has collected an archive about the representation of female artists in the art scene and included her findings in her work. She has received several awards, including a Pro Helvetia prize in collaboration with the US Embassy in Bern (Department of State), was juried into the artists’ program of The Drawing Center, New York, and exhibits nationally and internationally. She holds a master’s degree in natural sciences from the ETH Zurich, where she came into contact with imaging techniques and scientific drawing.