Atlas (2018-2019) was a series of site-specific performances created by composer Charles Kwong for the project Our Audible City. The aim of the project was to create a new musical experience outside concert halls, where the physical characters of the chosen spaces would become an integral part in the creation of the music. The series took place in six locations across Hong Kong. In each performance, musicians were positioned in space across the different sites, and some were given instructions to move around at specific moments. The positioning and motion of the musicians were designed according to the sonic and physical environment of the sites. While some audience members were registered to attend the performances, some were just passers-by who ran into the situations. In either case, the audience experienced an unexpected soundscape in familiar locations. The project’s intention was that each spectator would develop a unique and individual aural and mental experience during the performances. 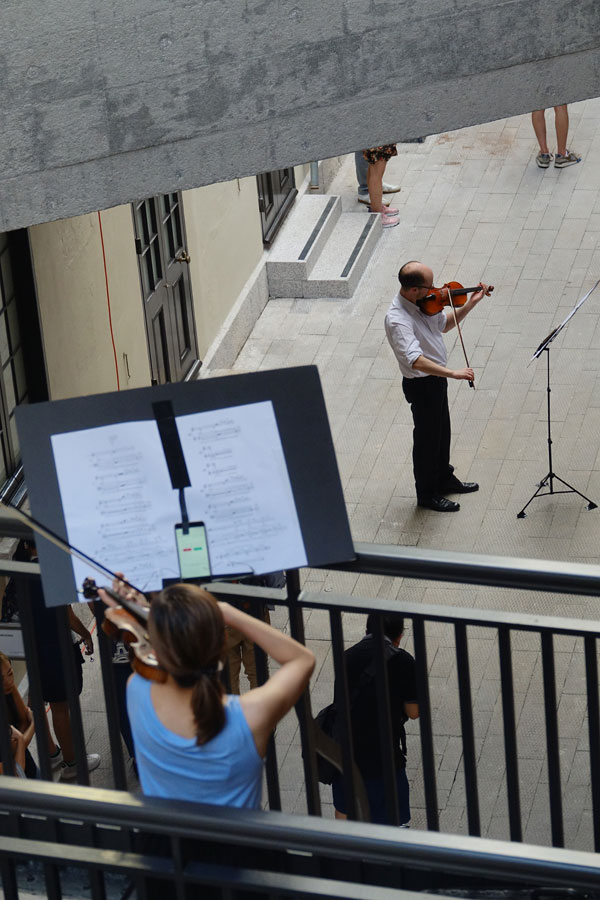 A car-free outlying island located at the southwest of Hong Kong. 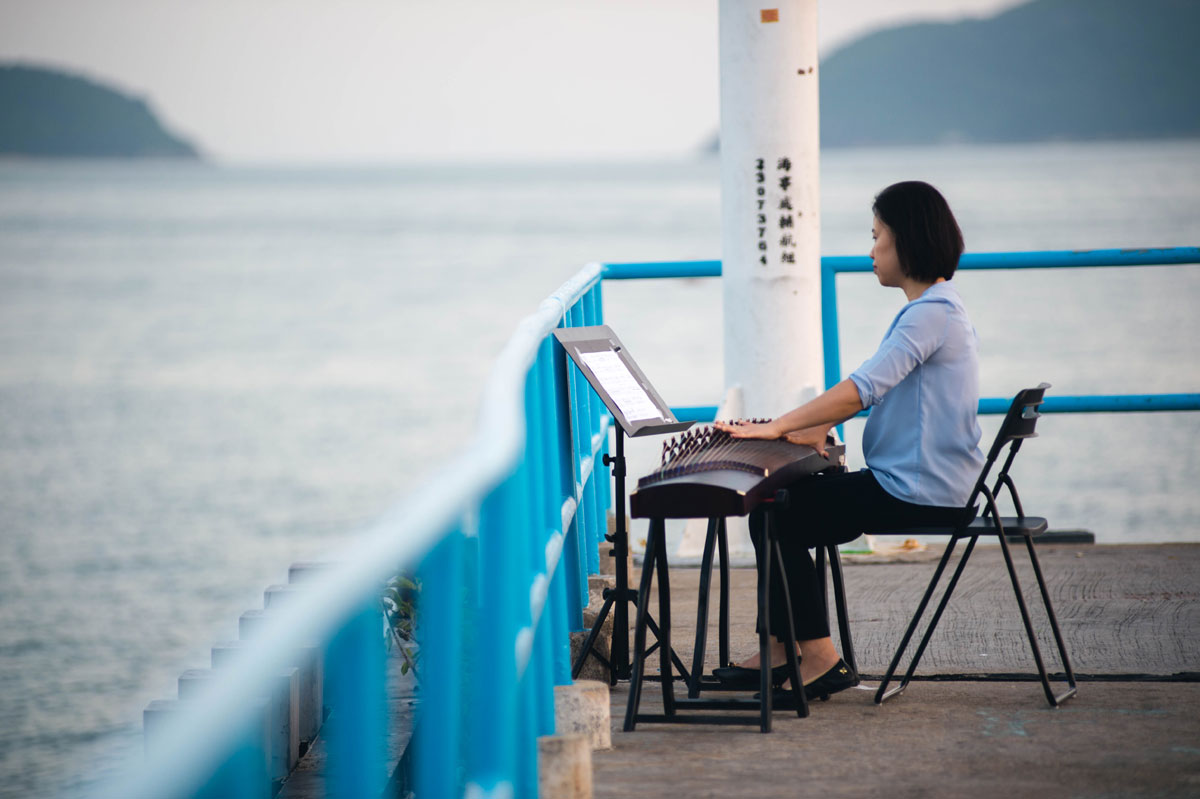 Atlas 3: The Courtroom at the Savannah College of Art and Design Hong Kong (26 January 2019)

The campus of SCAD Hong Kong is formally the North Kowloon Magistracy Building. This performance took place in the Courtroom, where the original structure of the room, including the magistrates’ bench, bar table, witness box, defendant’s dock, and public gallery, is retained. 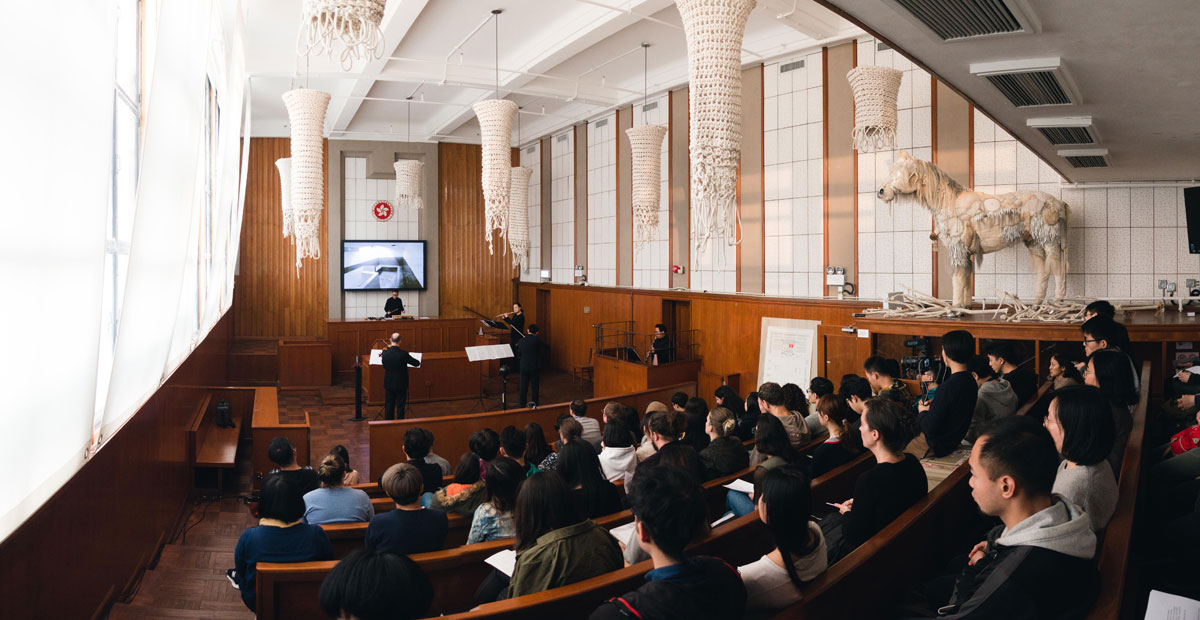 This performance took place at the University of Hong Kong in two parts. The first part is an outdoor performance held at the podium where the Pillar of Shame is placed.[1] Part two was held inside the University Museum and Art Gallery. In this performance, the same piece of music was performed in these two unrelated venues, exploring the relationship of space and sound, and to reflect on our ways of listening. 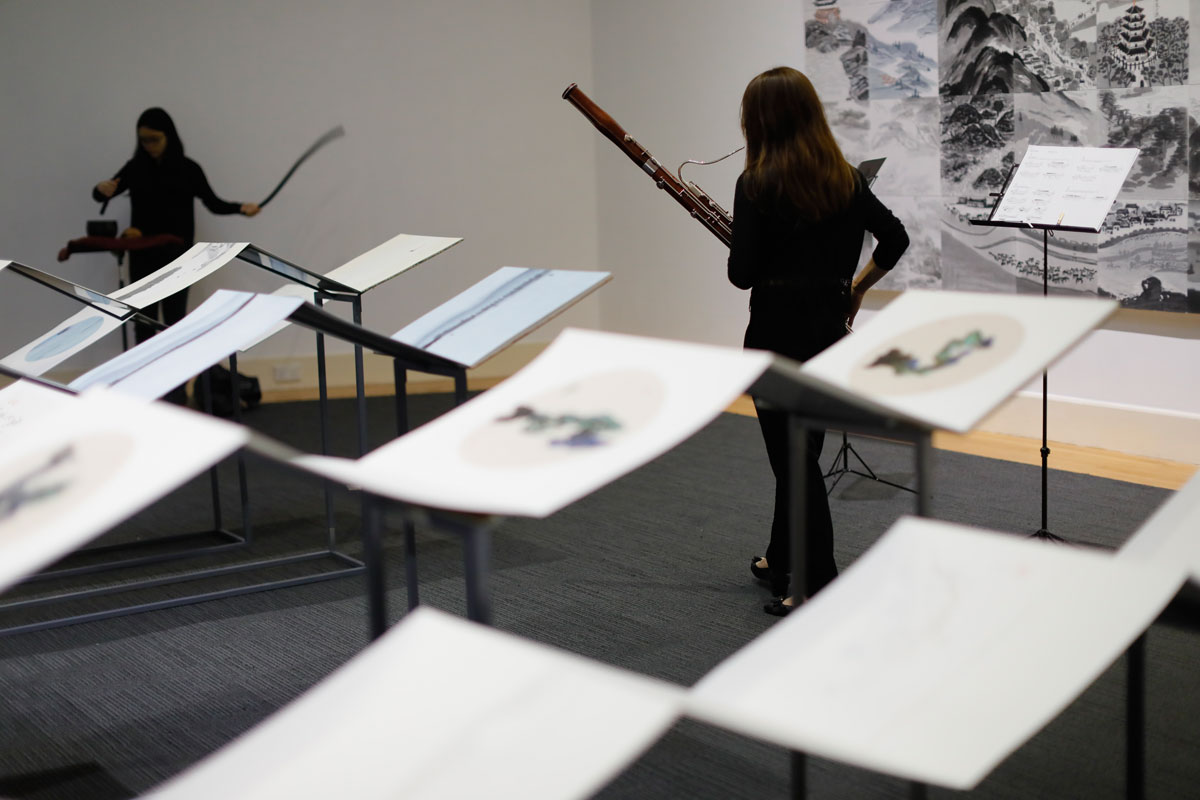 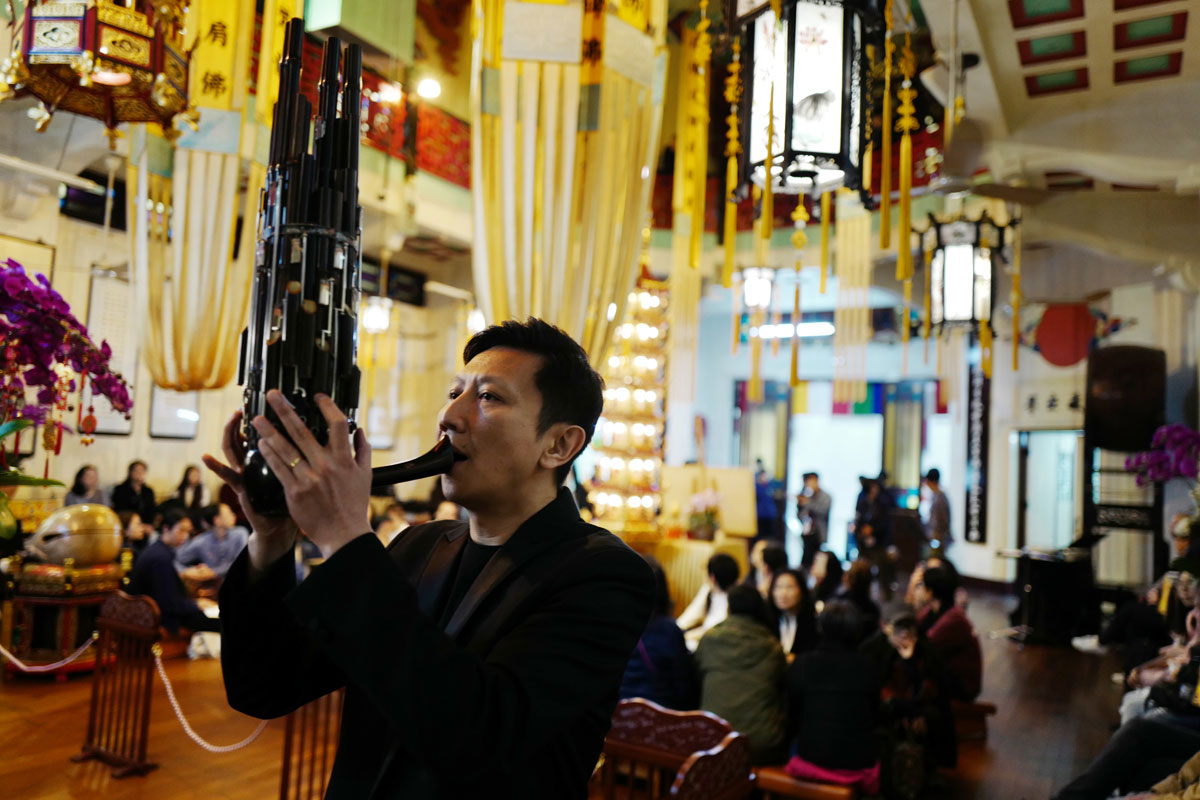 Formally known as Haw Par Mansion built by the founders of the legendary ointment brand, Tiger Balm, in the 1930s, the building is one of the few surviving specimens of the Chinese Eclectic style architecture in Hong Kong. 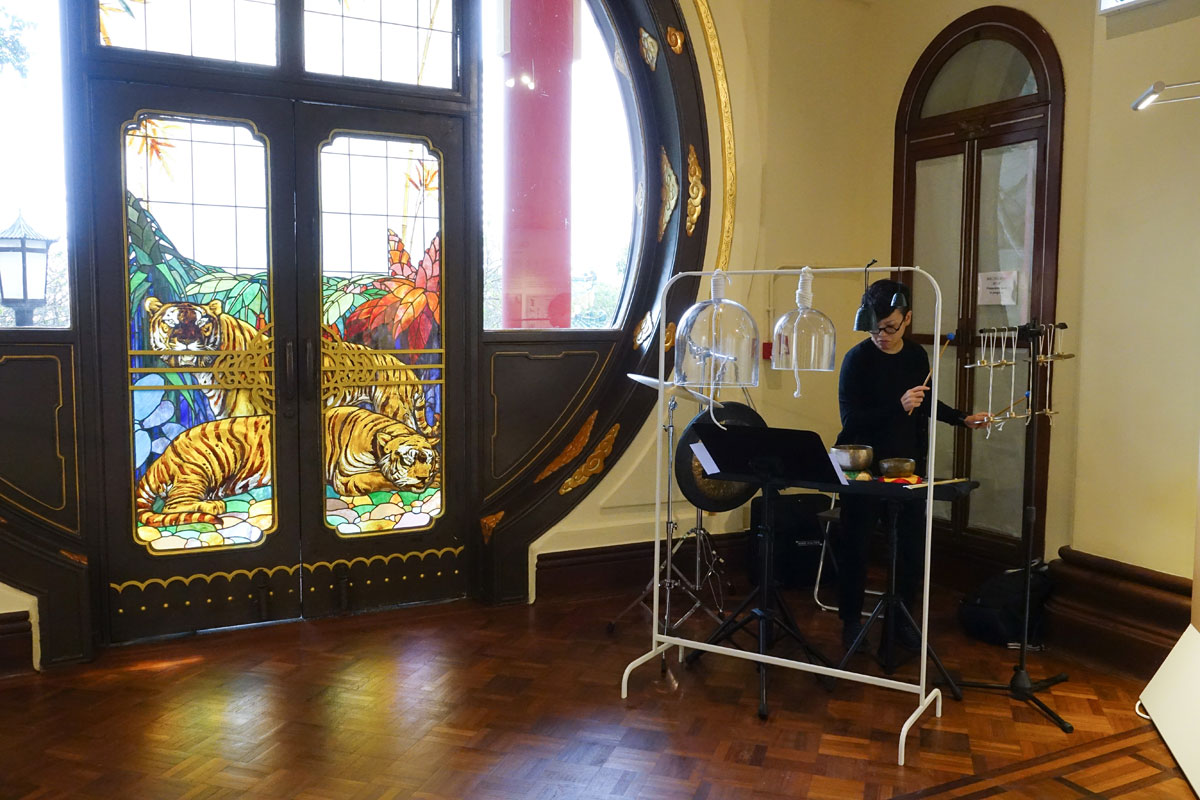 More Than a Place

Creating site-specific music means the physical features of the places, such as their spatial arrangements, resonances caused by the building materials and structures, as well as the environmental sounds are regarded as the fundamental elements of the performance works. These physical descriptions, or requirements, for each venue provided the compositions with the functionality and meanings of a map. Thus, the more particular the features of a venue are, the more difficult it is for these musical pieces to be transferred to another space. While the specificities of the sites supply the works with compositional materials that can hardly be replicated elsewhere, making each performance a unique sonic experience, the performances provide the possibilities to conceive the sites as something more than a place.

Taking place in a former magistrates’ court, Atlas 3 made use of the historical background and the symbolic significance of the site as the creative point of reference. Five musicians were placed at the magistrates’ bench, bar table, witness box, and defendant’s dock, respectively. The position of the musicians and the use of metronomes controlled carefully by the musicians indicate the seemingly well-defined roles the musicians represent. The performance then evolved into an exploration of the complexities surrounding law and justice when the musicians exchanged their positions, and the metronomes in different tempos began to intersperse with one another. Gradually, the musicians initially placed at the magistrates’ bench, bar table, and witness box withdrew from the mise-en-scène while still playing their instruments, and entered the custody cell located one level below the courtroom, with only the clarinettist from the defendant’s dock remaining, now occupying the magistrates’ bench. The performance ended with the clarinettist putting down his instrument, and slowly but steadily banging the gavel repeatedly. Behind him was a television live broadcasting from the surveillance camera in the custody cell. By incorporating the historical aspect of the site into the work, Atlas 3 transformed the symbolic significance of the site, being the place where authority of the adjudication was held, into a musical experience that allowed open interpretation and plural perspectives.

The finale of the series, Atlas 6, was held in the three-storey mansion, Haw Par Music. In this performance, twelve musicians were placed in different spots inside the mansion. As soon as the audience came into the building, the multi-origin sound sources served as a hint to the audience that the performance could not be viewed by only staying in one spot. As soon as they started to walk around the space, going up and down the stairs, each audience member became an active spectator of the performance, using their own individual capacity to select, interpret, compare, and make connections to the performance. Being a heritage site, the space itself has its own cultural and historical narrative. It is up to the audience to relate what they see to the music, or to totally ignore the artefacts surrounding them. Therefore, each individual attending the performance had his/her own unique experience during the performance. They make their own aesthetic judgement based on their intelligence, knowledge about the space, and personal experience with different kinds of music performance.

Our Audible City was the first site-specific project that the Hong Kong New Music Ensemble has produced since its formation in 2008. The project evoked great interest among the audience, workshop participants, and the artists involved. Personally, the performances of the Atlas series have led me to the discovery of the ways we perceive music; and how listening as a human activity can be a unique individual experience where the audience is given the freedom to associate and dissociate what they see in the performance with what they have seen and experienced elsewhere. As a producer, this project is an inspirational journey that re-evaluates our understanding of the structure and relationships between performing (acting) and viewing. The structure between the two may not, and should not, be oppositional, just as what Jacques Rancière expressed in The Emancipated Spectator, namely “[a]n emancipated community is a community of narrators and translators.”[2]

Sharon Chan is currently Creative Producer for Special Projects of the Hong Kong New Music Ensemble, where she previously served as General Manager for seven years. She holds an Mphil Degree in Musicology from The University of Hong Kong, and a Master’s Degree in Humanities (Literature) from the Hong Kong University of Science and Technology. In 2019, Chan received the Overseas Training Scheme for Arts Administrators from the Hong Kong Arts Development Council for her research on curatorial practice in contemporary music. As an experienced arts producer and manager, she has been invited to give presentations in conferences such as the Classical:NEXT (2018) and GRiNM (Gender and Diversity in New Music) Network Conference (2019). She is also Co-Founder and Executive Director of Project 21st, an independent production company that aspires to initiate international networks and projects with music as the central component.

[1] The Pillar of Shame is an eight-metre-tall statue created by Danish artist Jens Galschiot in 1997 to commemorate the victims of the 1989 Tiananmen Square massacre.

by Valentina Bertolani and Luisa Santacesaria

What Do Audiences Want? Data-Informed Curation for Diverse Audiences in New Music

New Music: Towards a Diversity of Practices

Structural Rigidity as a Barrier to Diversity

The Quick Fix: Thoughts on Chance and Community in New Music

FEM*_ MUSIC*_ : Collective Feminist Activism Within and Beyond the University

by Brandon Farnsworth and Rosanna Lovell

A Discussion with Dahlia Borsche