The investigation of time, language, and history is central to the artistic activities of the Raqs Media Collective. Founded in 1992 by Jeebesh Bagchi (b. 1966), Monica Narula (b. 1969) and Shuddhabrata Sengupta (b. 1968), Raqs practices at the intersection of contemporary art, historical enquiry, philosophical speculation, and theory, while taking into account social and political conditions in a global context.

The point of departure for this exhibition is Raqs’s continual fascination with time, a topic that has preoccupied the members of the group intensively ever since they began working together. In works such as "Escapement" (2009) and "Re-Run" (2013), they pose such questions as: What is time? What does it mean to measure time? And: How does time relate to space and history? Visitors will find themselves confronted with a range of time-related phenomena – from a heartbeat or pause for breath to the timing of historical episodes, all the way to eternity. Viewers are encouraged to interrogate conventional notions of the measure of time and its disciplinary function in everyday life, and to question its foundational role in the capitalist organization of labor. 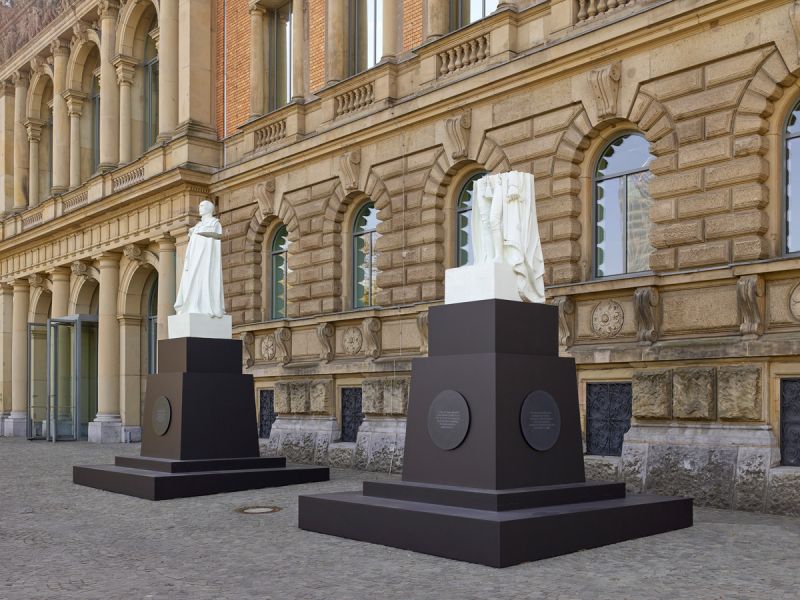 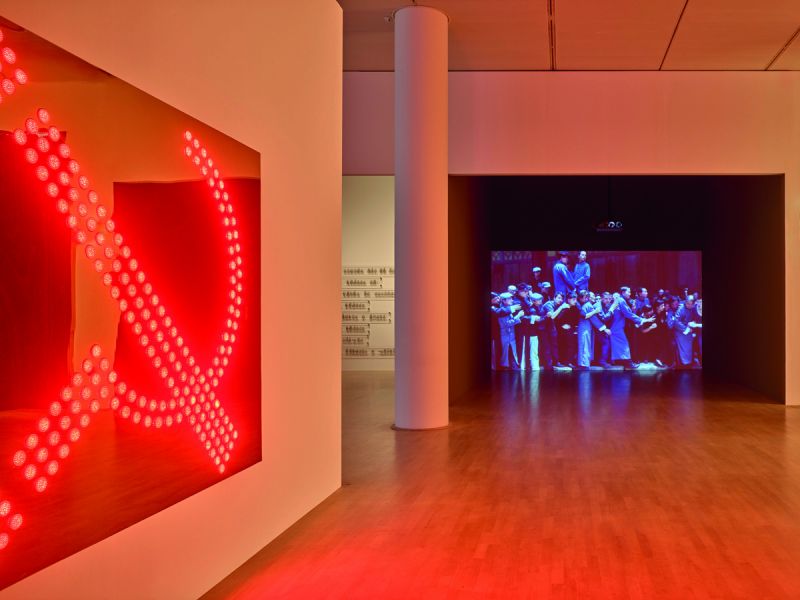 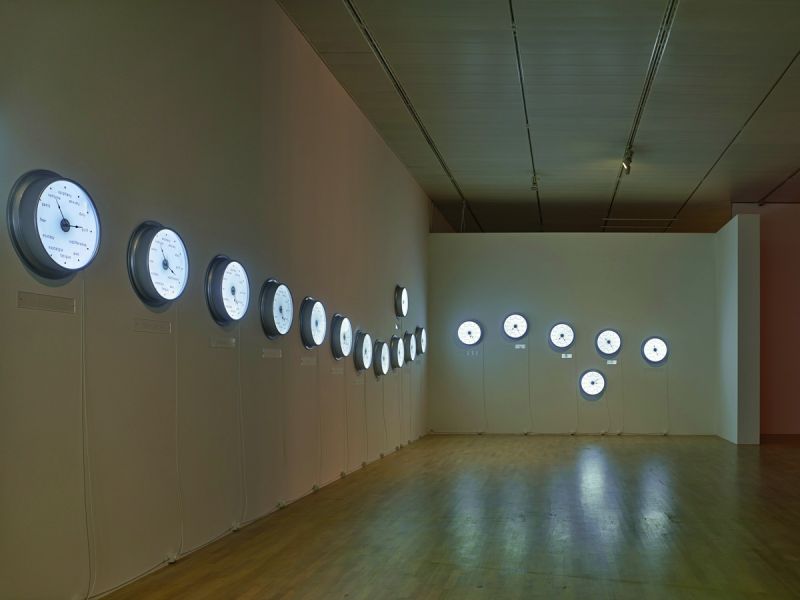 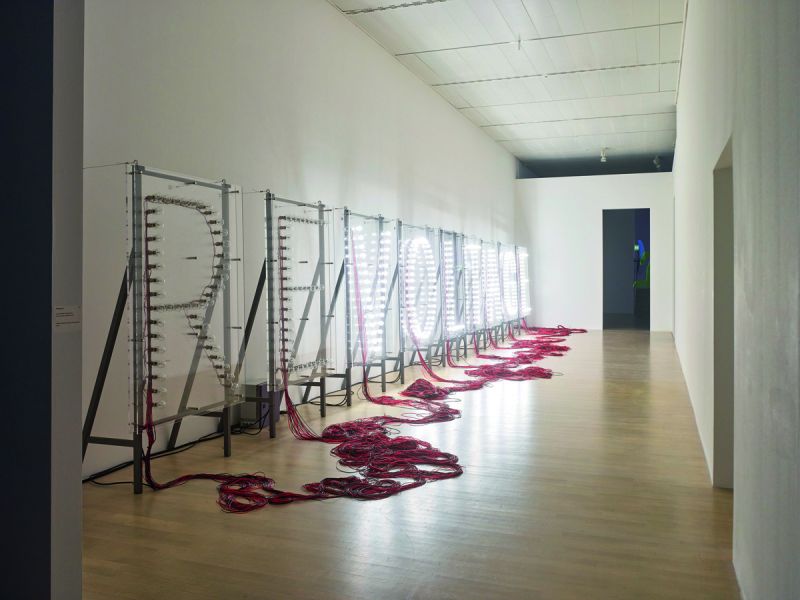 The artists make language their material and medium of play. This may take the form of puns or neologisms which they integrate into the titles of their works or weave into texts. In illuminated installations such as "Lost in Search of Time" (2015) or "Revoltage" (2010), it features in the form of brightly illuminated letters arrayed in regular rhythmic patterns. Such linguistic play allows them to elicit a variety of readings, to break with fixed terms and concepts, and to subvert linear narratives. Even the collective’s name is based on wordplay: “Raqs” can be traced back to a term in Islamic mysticism that refers to an ecstatic state attained by Sufi dervishes while whirling. It describes a highly concentrated and at the same time continuously active mode, which Raqs describe as “kinetic contemplation.” At the same time, Raqs can stand for "Rarely Asked Questions."

With their exhibition at K21, Raqs open up a new space of possibilities, one that invites visitors to heighten their awareness of the fundamental ambivalence of this world while re-examining habitual methods, narratives, and patterns of thought.[1]

Dreams of equal division of toxicity
Our civilizational failure in dealing with toxicity, along with the radical need to develop resources of care, must be included in every conversation.

We have a friend. Bhagwati Prasad is an artist who deals in reveries and revelry. For some months now, he has been working with a sharp bamboo stylus on translucent hide, scoring some new, some invented, some premonitional, and some remembered lines. They all lead to Begumpura: a land without sorrow.

It was Ravidas, the 16th century artisan-mystic, who named and imagined this city of bliss and equality, predating most utopian visions.

The regal realm with the sorrowless name:

they call it Begumpura, a place with no sorrow,
No taxes or cares, no one owns property there,
No wrongdoing, worry, terror, or torture.
Oh my brother, I’ve come to take it as my own,
my distant home where everything is right.

The saying “the first draft of history” refers to the relevance of journalism. It reflects the motto of “today’s news is tomorrow’s history”. Raqs Media Collective refuses to see history as static and set in stone. “We regard it as a palimpsest that is permanently in flux due to overwriting, overlaying, and reinterpreting,” they say. Made in 2014, the work uses newspaper, blackboard paint, chalk.

He had declared that now, he, Ravidas, a “khalas chamar"—an untouchable leather-man who has freed himself from the shackles of hierarchy—invites all into a milieu where there are none who are second, third, or fourth in hierarchy. All are equal, each has primacy, and all roam through the palatial halls of bliss—which everyone inhabits as companions, of each other and the planet.

For Prasad, the diameter of Begumpura is vast, and its circumference porous. It encompasses oceans, forests, cities, waste, animals, tools, homo sapiens, machines. His maps are complex navigational diagrams that chart paths and currents between an expanding archipelago of many selves, many kinds of selves, the cosmos, and consciousness.

The audacity of this image comes from a paradigm of care.

In the past, Polynesians sensed the presence of islands through the flight of birds—a 9-mile island would thus have a 200-mile flight diameter. The land did not end when the water started. This sounds charming—but the moment we acknowledge expanded terrains by bringing in toxicity, fear starts to rage in the mind. Fukushima, Chernobyl, Bhopal. These are all diameters that have expanded vastly from their source.

In the images of India’s south-east coast transmitted by the satellite Aura, rusty blobs of thick sulphur-dioxide-laden air show up consistently. Further down the coast, if remote-sensing thermal imagery studies were done of the groundwater, aquifers, fauna and soil, they would no doubt show carcinogenic concentrations of arsenic, iron and cadmium. Epidemiological investigations of villages downstream from a copper smelter in this region across several years show unusually high frequencies of cancer. “Copper for You, Cancer for Us," says a poster in one of the settlements.

Gas plumes rose from the copper smelter in Thoothukudi on 23 March 2013. Five years and two months later, after another gas leak, workers, fishermen, housewives, farmers and residents from in and around the city marched to the copper factory in protest. Thirteen people were killed in police firing that day.

The predicament of being human involves the production of waste on a monumental scale. This is generally called civilization; sometimes it is simply a copper smelter. This is not a matter that can be resolved metabolically, or bio-chemically. It doesn’t just all get sublimated, recycled, or used up in some arithmetically sorted way that leaves the debit and credit sides of production, consumption, waste, want and excess all neatly squared up. Each hillock of refuse on the outskirts of a city represents a demand made by the present on the future, with no promise of recompense, until the archaeologists come calling.

Our Indic civilizational response—one could even call it profound non-thinking on the matter—has been to forever offload toxins on to designated “others"—they are meant to carry out the difficult task of keeping the biosphere clean of stench, and of the poison that arises from faecal or dead matter. In order to keep the trace of toxins away, dominant wisdom kept out of the walls of the polis all those who staked and risked their lives for cleanliness.

Hierarchies are invented and maintained so that not only the accumulation of toxic waste, but also its consequences, can be shunned and offloaded. This is not just for one generation, but for the future; through time, in perpetuity if possible. Death, disease, human and animal waste, and the residues of production—these are all things much rather not handled by those riding higher on the karmic roller coaster.

This thinking is a scandal; it comes from a paradigm of fear.

We have another friend. Shveta has to visit the All India Institute of Medical Sciences, Delhi, regularly for her condition of multiple myeloma, a cancer of the blood. Others who visit have various degrees of toxicity from the containment of the cancer cells in their bodies. She describes courage, love, affection, laughter, demoralization, pain, bewilderment, hope. Her oncologist always smiles, and speaks of life that has to be led with joy.

She reminds us that this is a world very close to what we all live, daily, but with much more expressed courage and application. This is not the world conjured up by the abhorrent image arrayed on every packet of cigarettes. “If the pathologies portrayed on the packet are the monstrosities that they are portrayed to be, then the people who bear them must be monsters who must in turn be shunned."

This dive into the abhorrent image is a failure of the imagination of a culture that cannot conjure care when it wants to caution.

Why is it that fear of the toxic has become the means to police those who exercise immense compassion and courage that enables them to handle its raw danger? Why reprimand that which needs to be understood and thought with?

It is not a surprise that the profound song of equality for all was sung by Ravidas, a tanner-mystic. He saw equality as the deepest connection.

The care of life and the care of self are not possible without care with toxicity. The splitting of care and the toxic is detrimental to thinking about the future of life on this planet. To live with toxicity is a condition of life. We have to think about our sickness and our offal and our residues of constant industrial production and consumption. More and more, pharmacology is a balance of toxicity within the human body. The life of millions is extended by this balancing of pharmacological toxicity in their bodies. As our life expectancy increases, so will various chronic conditions. Health will no longer be conceived without toxicity.

The care of life. The care of those we love. The care of neighbourhoods. The care of others. The sustained circulation of abhorrent images to terrify us is a continuation of the civilizational blind spot that can only think of maintaining the life of some by the banishment of others.

We have to begin to think of life with toxicity, and without banishment. We can do this by openly discussing, as a global conversation, and with the self-knowledge of a civilization that this banishment is a cruelty and a folly.