Tacoma Action Collective began as a structure within which activists who were committed to black joy, love, and success could organize, perform direct action, and support others doing related work. When members of TAC viewed the national traveling exhibition, Art AIDS America, at the Tacoma Art Museum, curated by Jonathan David Katz and Rock Hushka, they were dismayed at the lack of black representation in terms of the art and artists involved. This only further echoed the diversity issue TAC members had already seen on view at the museum. To address the exhibition, and the larger structural issue, TAC organized an action. On an open museum night before the exhibition’s closing, TAC occupied Art AIDS America with signs that read #StopErasingBlackPeople, and they staged a die-in. In the press release below, TAC outlines their demands and justifications for the action.

TAC’s demands were met by the museum, and in every subsequent iteration of Art AIDS America, black artists and other local artists were better included in the exhibition. The culmination of the exhibition’s evolution was the final stop of the national tour in 2017 at Alphawood in Chicago. Many new artists had been added, a new catalog was produced, and an additional related stand alone exhibition was commissioned at nearby DePaul Art Museum. That show, entitled One Day This Kid Will Get Larger, curated by Danny Orendorff, was on view during the Alphawood run of Art AIDS America.

TAC and the curators of Art AIDS America raised the bar on AIDS culture representation, setting a new standard in which the meaningful inclusions of black artists living with and impacted by HIV was the new minimum. TAC produced a short film about the Art AIDS America action for Visual AIDS’ 2018 Day With(out) Art series, entitled Alternate Endings, Activist Rising, which can be viewed at vimeo.com/300077176. 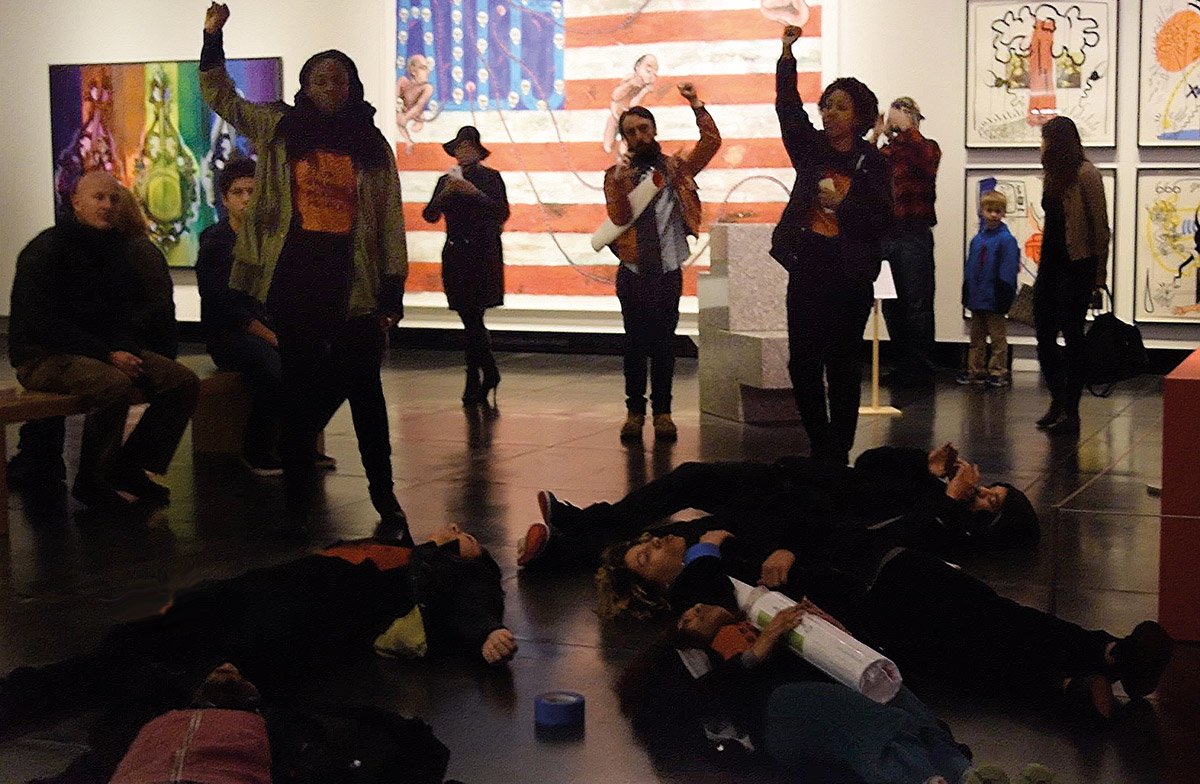 Tacoma Action Collective, Screenshot from #StopErasingBlackPeople, 2018. Courtesy of the artists and Visual AIDS

– more Black staff at all levels of leadership within Tacoma Art Museum.

– staff/board retraining in Undoing Institutional Racism (UIR) at all levels of leadership among Art Museum personnel.

Art AIDS America, which purports to “explore the whole spectrum of artistic responses to AIDS” almost entirely excludes Black artists. Black Americans represent over 40% of the death toll[1] (nearly 270,000 AIDS related deaths since the 80’s) but only 4 out of 107 contributors to the exhibition are Black. When confronted about the lack of Black artists in an interview, TAM curator Rock Hushka explained “You have to wait for the next one.”

This gross negligence is unacceptable. The die-in will mourn and honor the over nearly 700,000 Black Americans[2] past and present who have directly suffered in this epidemic and for whose lives Tacoma Art Museum, Bronx Museum Jonathan Katz, and Rock Hushka have shown no concern. This is critical because arts movements have been the center of raising public visibility throughout the history of the HIV AIDS epidemic, and while HIV prevalence decreases in nearly every US demographic, it continues to increase among Black americans due to lack of access to medical care.

For Black Americans the crisis is not over. 1/3 Black trans women are diagnosed with HIV[3] and 57% of all HIV diagnoses under age 24 are of Black youth[4]. Black Americans also die more frequently and sooner from AIDS related complications than any other group in the US based on lack of access to medical care and identification of the virus in late stages of development. In an era when Black bodies are targeted from seemingly every direction, the fundamental lack of empathy or regard by TAM and Bronx Museum is disturbing. The exhibit which largely displays HIV as a white crisis from the 80’s. these two institutions are willfully continuing to erase the reality of black suffering in the HIV AIDS crisis, by showing and almost exclusively white gay perspective.

This is show is the natural result however of a predominantly white organization with zero Black full time staff in its entire history (besides grounds/security services) developing a project addressing HIV (and partnering with no Black organizations or curators in that development). Sadly this approach is consistent with TAM’s leadership and engagement model for the past 3 decades. Other than a quilt show 4 years ago the last project at TAM that Rock Hushka remembers emphasizing Black contributions was in 1993. This is typical of a museum that targets “whole families” at the center of it’s marketing strategy.

Still there is no excuse. Beyond the fact that Hushka admits to not being familiar with the racial demographics of those impacted by HIV, the museum is actually failing all Tacoma residents by propagating a deeply distorted and false history of our society.

This action is necessary to make a bold statement to art museums and historical institutions across the country that we are not waiting until “the next one”.  We refuse to be relegated the second class slot relegated by TAM.  We have engaged in dialog. We have asked for changes to the show. We been given no choice but to take direct action.

Our efforts are not to discount works included in the project. Many artists contributed strikingly relevant to Art AIDS America about resilience and loss. We deeply respect the work that has been contributed, especially the 4 Black artists included. Nonetheless, to create a project about HIV in the US and discount the nearly 270,000 Black lives lost in this epidemic (1) is not only grossly negligent from a historical standpoint, but contributes to the lack of visibility and lack of public concern that keeps the epidemic at large.

This show paints HIV as an issue faced predominantly by white gay men, when in fact the most at risk group are currently black trans women.  After resistance by groups such as ACT up in the 90s successfully pressured the government and medical industries to support the fight against HIV/AIDS, the benefits of those movements were enjoyed primarily by white gay men and others with the privilege of medical access. HIV affects black communities disproportionately, and white gay America has been content to look at HIV AIDS as a non issue because they are no longer affected.  New developments like Truvada have been heralded as the end times HIV, but the access to the tools of HIV prevention/treatment for Black americans and Black Trans Women remains largely ignored.

“To say that the reason black people account for only 12% of the U.S. population yet nearly half of all newly infected HIV cases each year, is because of something black people are doing—is anti-black. However, this isn’t the first time “black behavior” is blamed for black suffering. If only he wasn’t wearing a hoodie. If only she listened and didn’t keep running her mouth. If only he didn’t take his hands out his pocket so fast. If only he didn’t shoot himself—while handcuffed in the back of a police car. It is also important to note that this sort of rationale isn’t only particular to “them” but we, black people, also tend to cite such anti-black logic ourselves. When we say statements such as, “HIV/AIDS is God’s reckoning for the deviance of the gay community,” we actively participate in a white supremacist agenda, that in turn kills us and resurrects a bolder, whiter, more resilient Jesus.

Epidemic is defined as “a widespread occurrence of an infectious disease in a community at a particular time.” The word I wish for us to pay most attention to in this definition is “community.” The greatest advances in population health, especially in the twentieth century, were predicated on raising the general health of populations through social investments in drinking water, nutrition, safe housing, sanitation, and environmental safety, among other social investments. With this in mind, we can not properly have a conversation about HIV within the black community without also having a conversation about gentrification, or minimum wage, or food justice, or gender justice, or climate change, or poverty, or most importantly prison.  “Timothy DuWhite - Hunted by the State: HIV, Black Folk & How Advocacy Fails Us

Black people worldwide should not be dying from a disease we have the resources to treat and prevent.  White supremacy, gender justice, economic inequality and access to medical care are not sideline issues in the topic of HIV but central and entrenched within the subject of race. Until we face the ongoing epidemic in front of our eyes the whitewashed narrative of the HIV AIDS crisis will continue to astound middle-class “whole families” nationwide while Black Americans who can’t afford museum memberships continue to die in mass.

Please read the full interview with curator Hushka at http://postdefiance.com/exclusion-of-black-artists-from-art-aids-america/

Tacoma Action Collective (Tacoma,WA) is a partnership of black community organizers working in grassroots action and education in Washington State.TAC works to eliminate systemic oppression and structural violence while empowering people to build autonomous communitie rooted inequity and justice. In 2015, the collective staged a die-in at the Tacoma Art Museum in response to the white-washing of the exhibition Art, AIDS, America.

2 700,000 Black people Affected was determined by combining the number of Black people killed by aids and those currently living with HIV. “Mortality Slide Series” http://www.cdc.gov/hiv/pdf/statistics_surveillance_hiv_mortality.pdf

3 1/3rd of all transwomen being hit positive is based on self reporting studies, other studies suggest black transwomen may have infection rates closer to 56%. “HIV Among Transgender People” http://www.cdc.gov/hiv/group/gender/transgender/