“What examples of your curating have fed you the most?” is the question artist Nayland Blake posed to Nelson Santos for this issue of  On Curating. To answer the question, Santos, an artist, curator, current Interim Director of Curatorial Programs at Leslie-Lohman Museum, and former Executive Director of Visual AIDS, created a series of digital collages, bringing together decades of AIDS cultural production including his influences, some of his own visuals, and work he has commissioned over the years.

Through these collages, Santos puts into conversation the familiar, overlooked, new, and unknown to tease out themes that while dominant within the ongoing response, are nevertheless, often left under-discussed. Politics, cross-generational activism, the ongoing-ness of crisis, anti-black racism, gender and sexuality, and identity writ large are issues, ideas, and frameworks that emerge amid the assembled memes, posters, photographs, artist projects, and text.

Santos originally worked with Nayland Blake in 2007, when he asked Blake to visually respond to the question “Where did the love go?” for a series of artist-designed AIDS awareness projects. As Santos tells it, “The question was triggered by what seemed to be an abundance of silence and apathy around HIV/AIDS at that time. After decades of loud and passionate activism, AIDS was no longer front-page news, bowls of condoms were no longer sitting on every bar, and red ribbons were only for logos not lapels, meanwhile HIV infection rates continued to rise.”

Blake’s response was the creation of a vinyl sticker that read LOVE HAPPENED HERE at the top, with a space for a viewer to write in a date, followed by a text that read: IT CAN HAPPEN AGAIN / BRING LOVE BACK / KEEP YOUR LOVERS SAFE.  Blake intended these 4”x6” stickers to be placed in public spaces. As he stated at the time of the project, "When I move down the streets I'm always aware of the fact that every inch of this city has at one point or another been the witness to births, breakups, protests and first loves. I think about the ways that particular spots are no longer 'the corner store' but now 'where Phil and I had that fight and we were both crying on the street.' The sticker is a way for people to commemorate their love as well as a reminder to not give up, to keep making love visible and public."

Blake’s sticker, being seemingly simple, made up of text and design, can also be considered an assemblage of sorts, bringing together Blake’s commitments as a lover, artist, curator, friend, and educator who has lived through many periods of the crisis and bore witness to the foundational praxis around the role that care and love play in the face of neglect, apathy, stigma, suffering, and death. The notion of “keep your lovers safe” may seem like a standard “safer sex” message ubiquitous within AIDS cultural production; at the same time, it can also be read as a call back to the very creation of safer sex itself. “How to Have Sex in an Epidemic: One Approach,” a 1982 pamphlet written by Richard Berkowitz and Michael Callen with assistance from Dr. Joseph Sonnabend, was among the early calls for gay men to use condoms, and suggested that while much was left to learn about the epidemic, it was possible that “mutual affection” was the community’s “best protection” against premature death and suffering.

Blake’s bringing together of history, design and heart to an art object is alive and well within Santos’ collages, and like the very question Blake posed—What examples of your curating have fed you the most?—are generous in their visual and affective offerings. 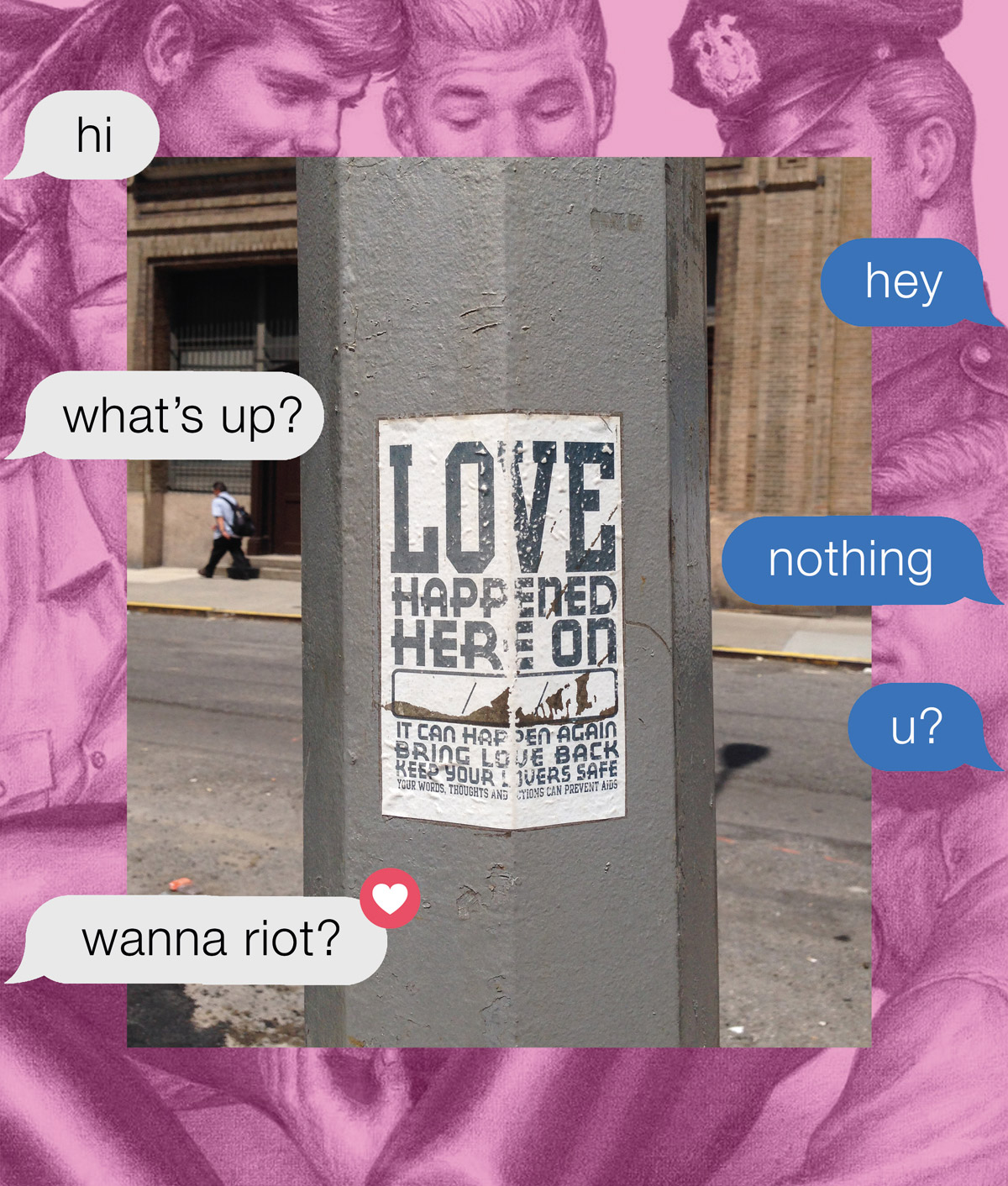 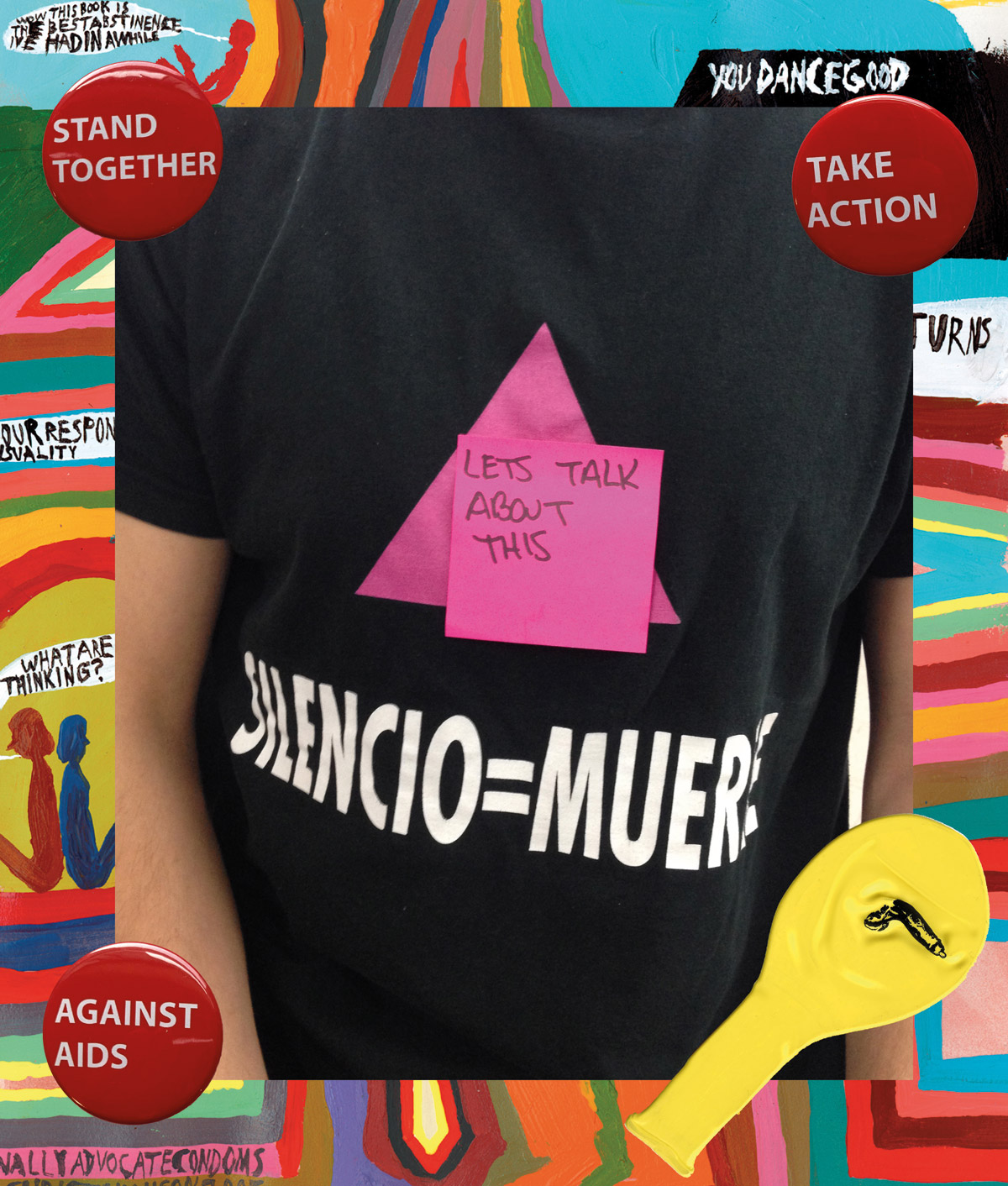 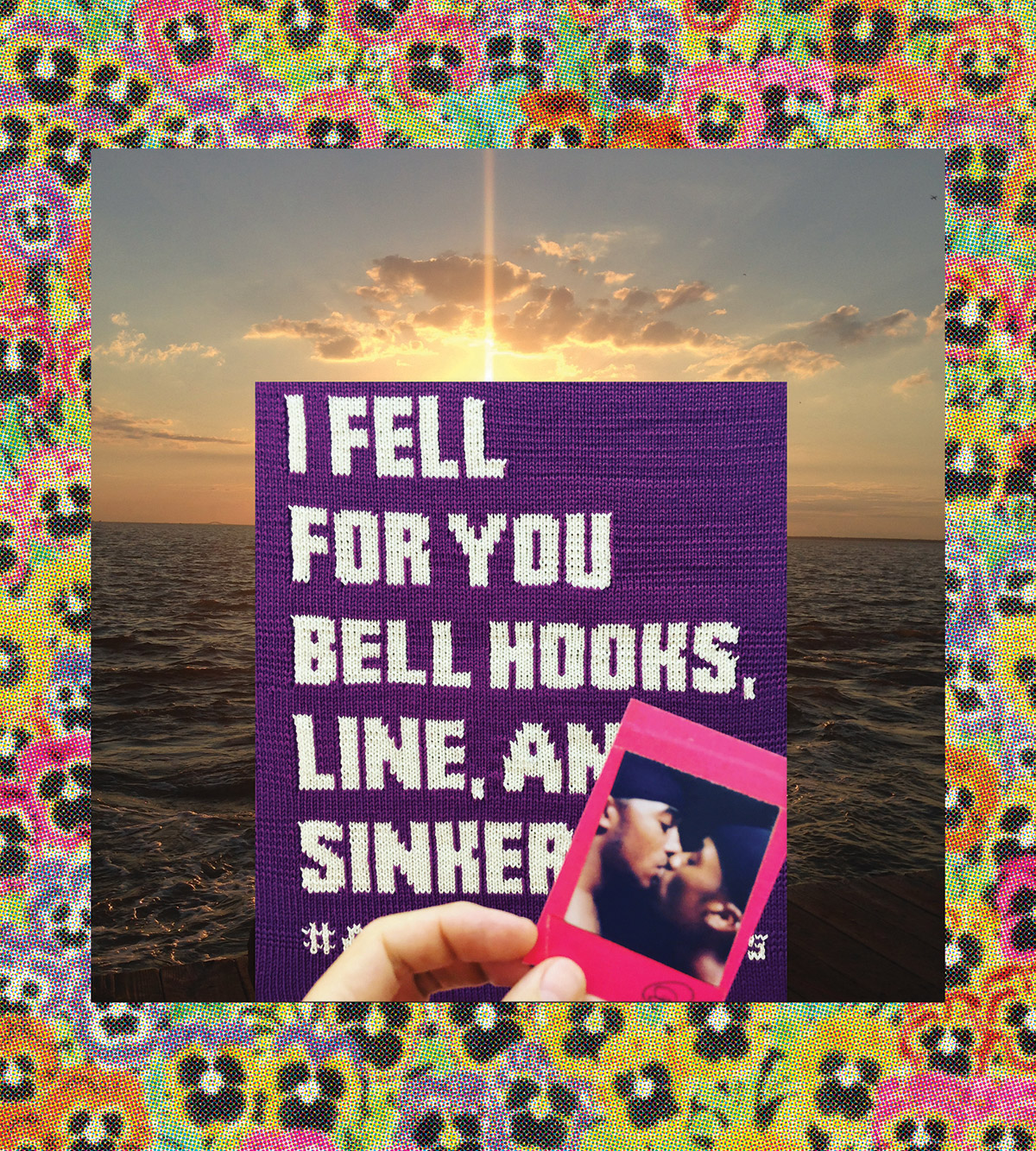 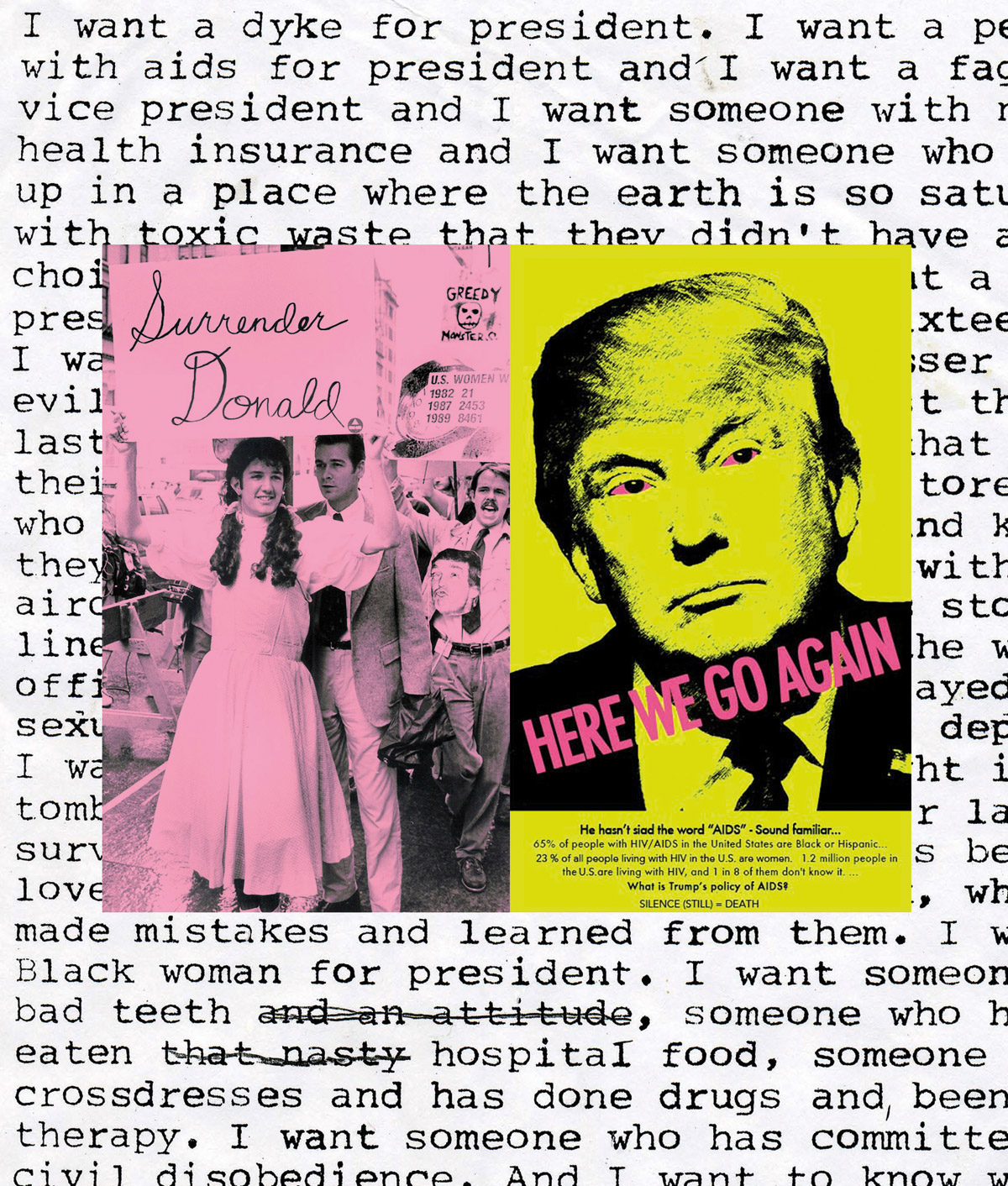 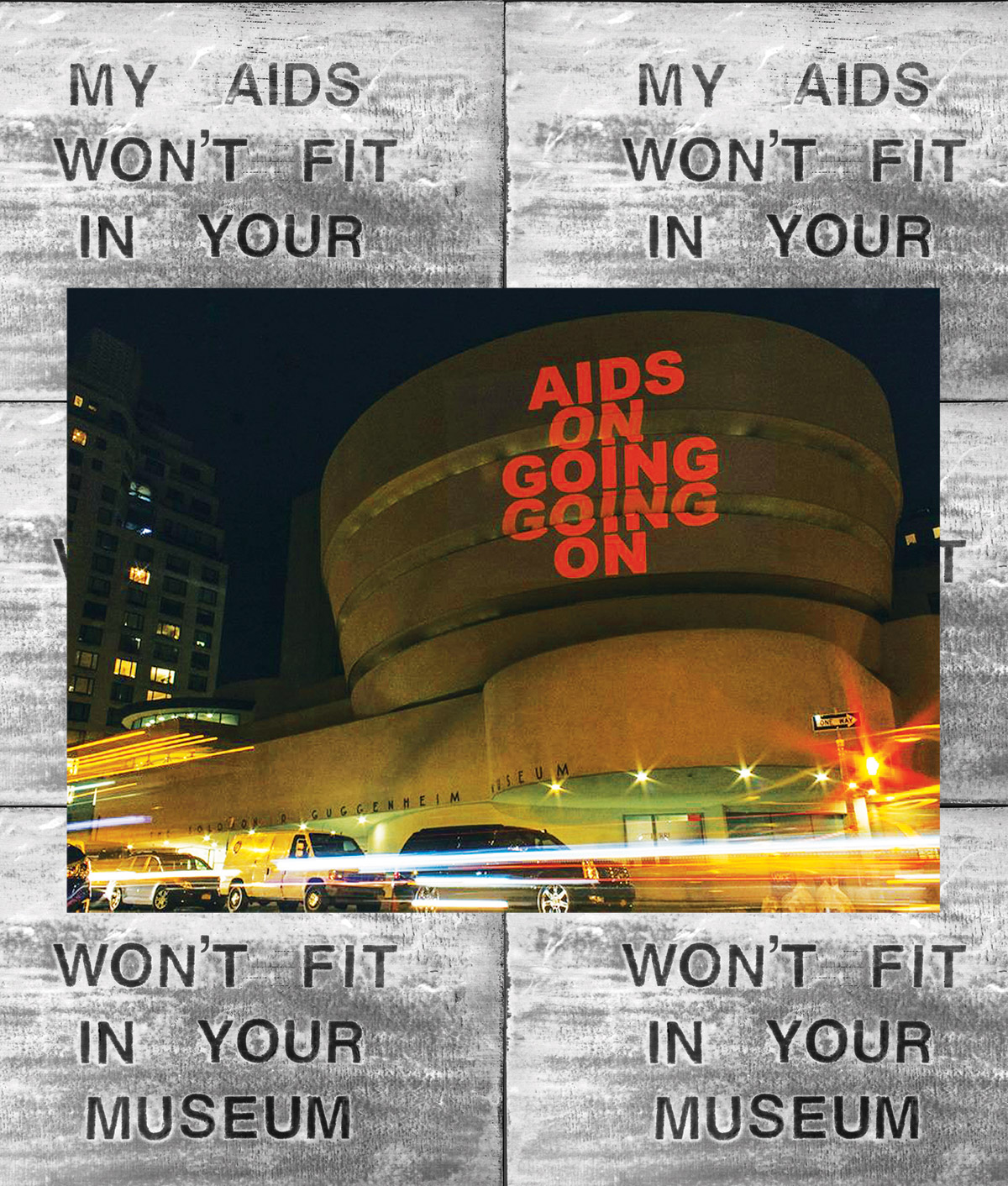 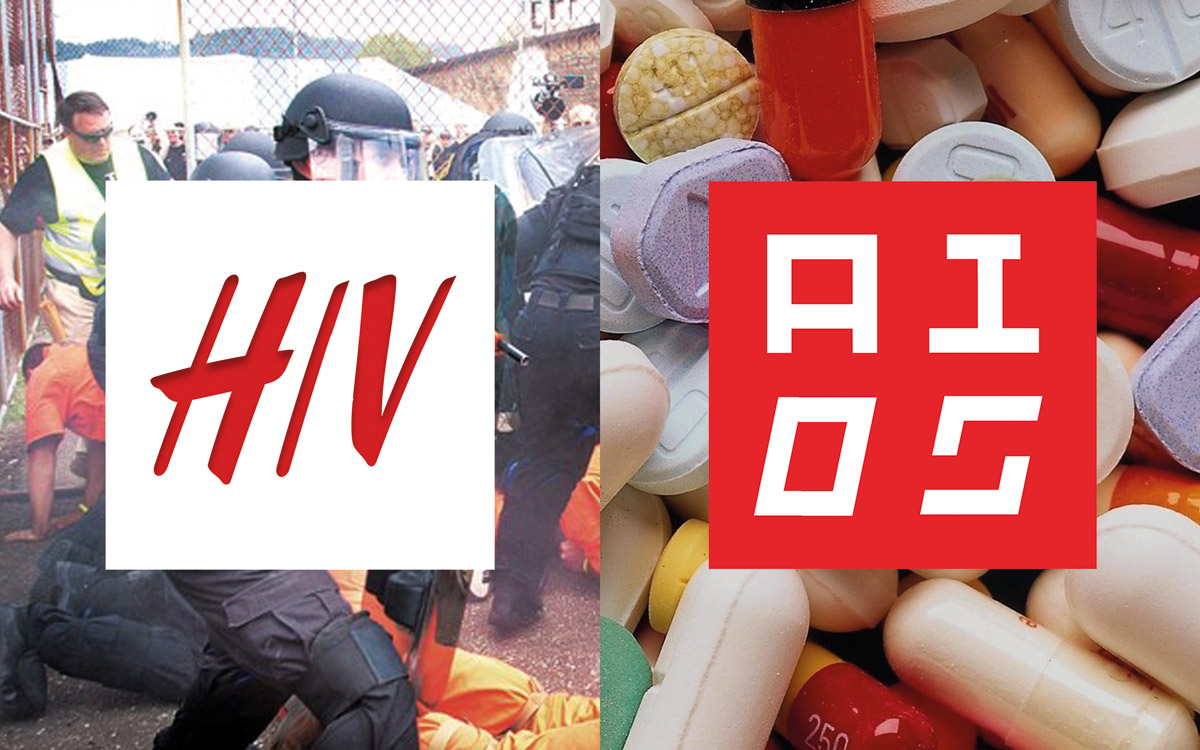 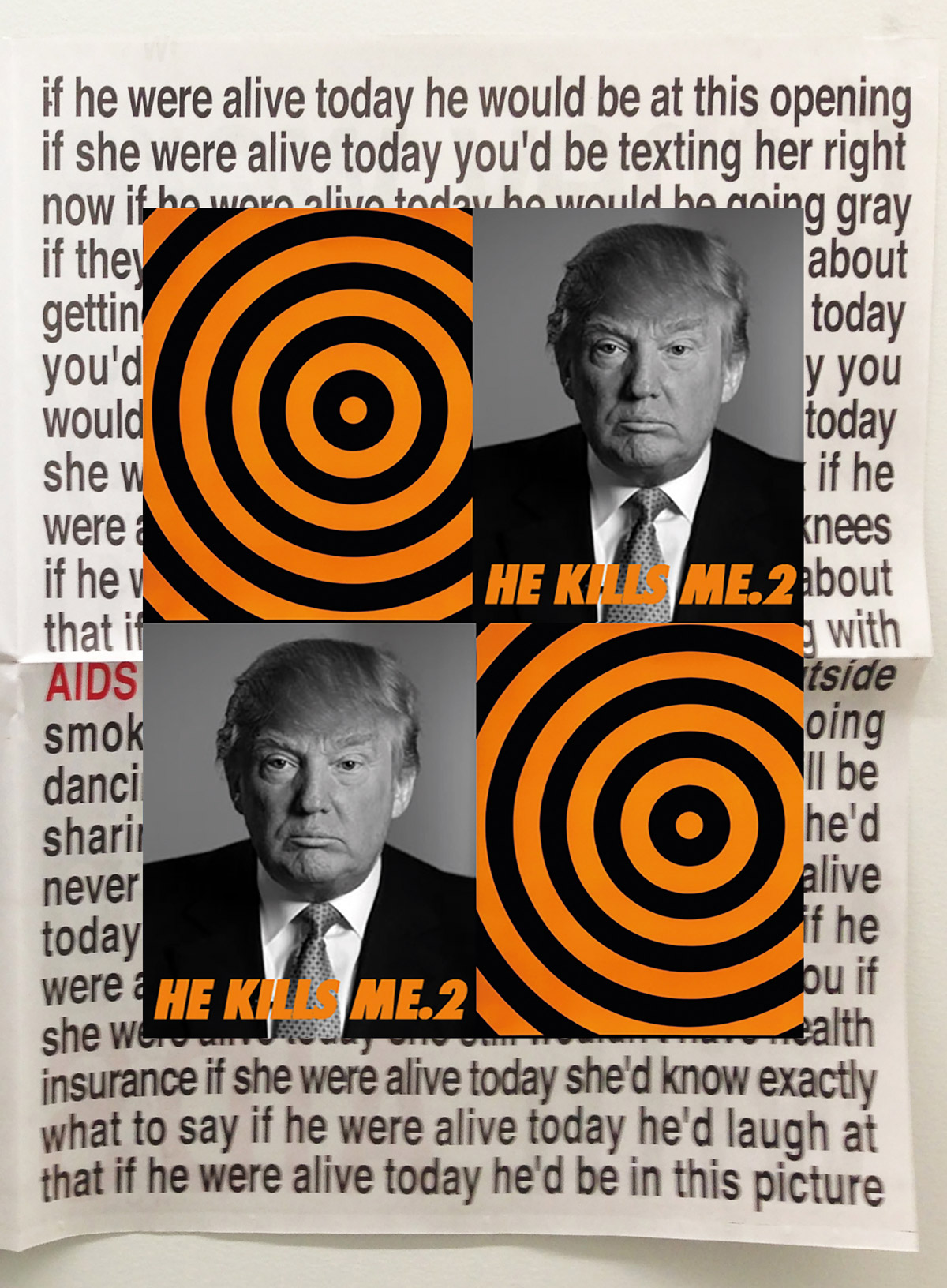 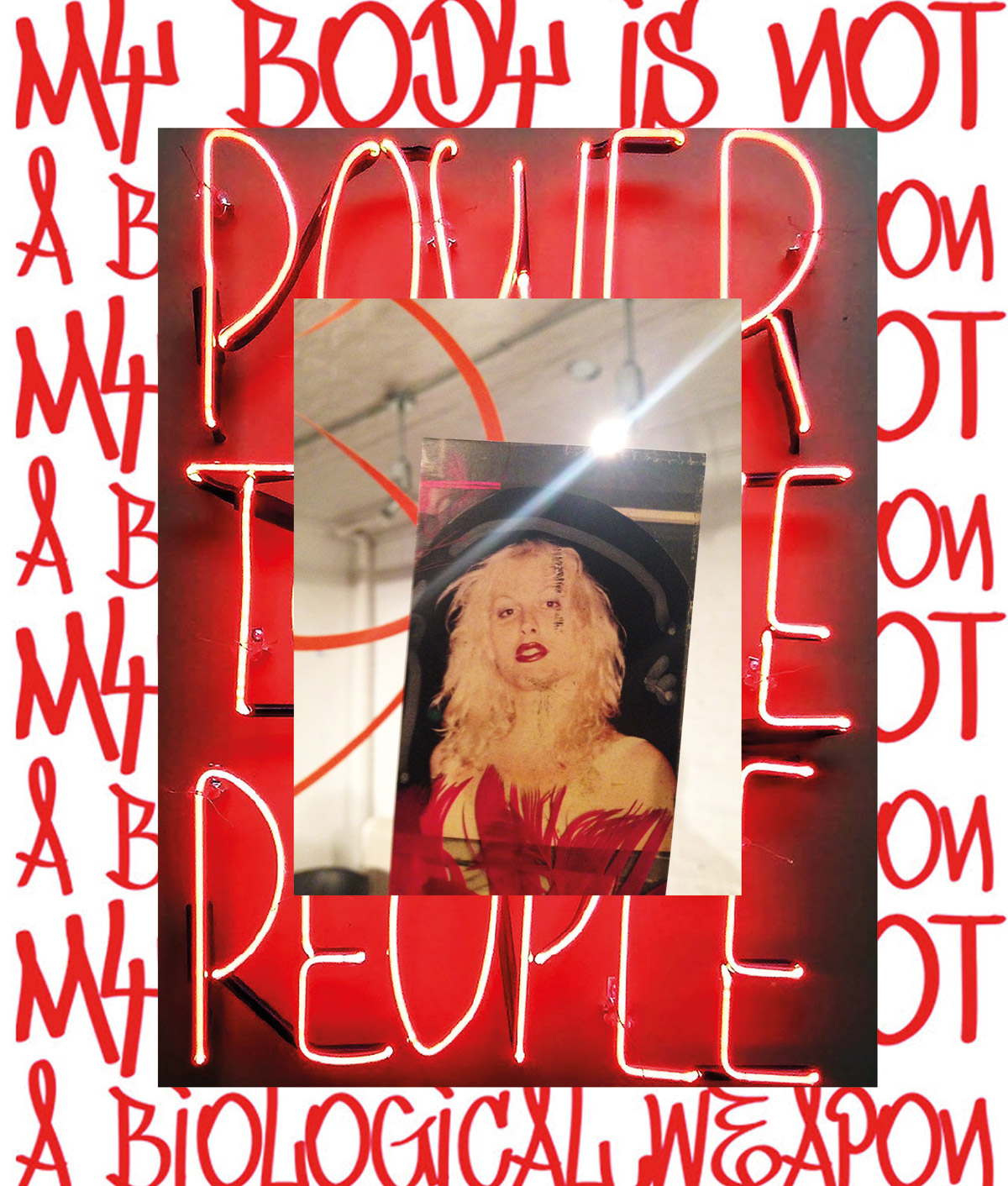 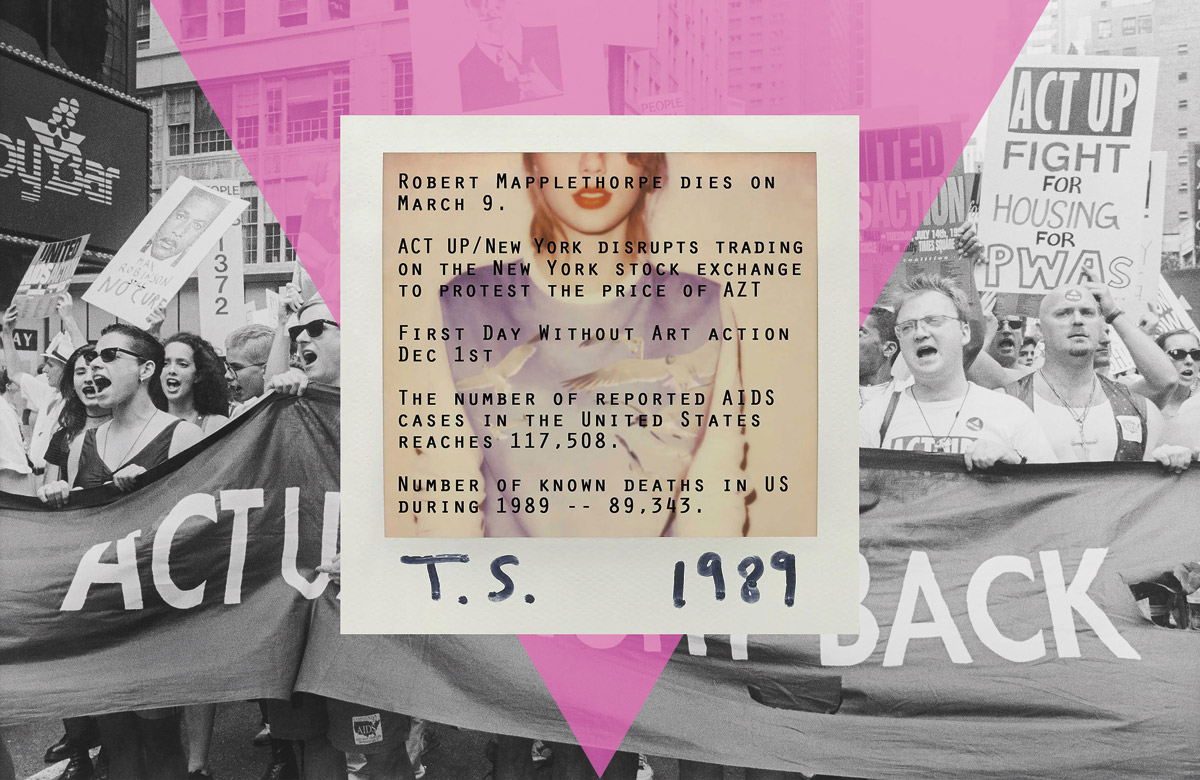 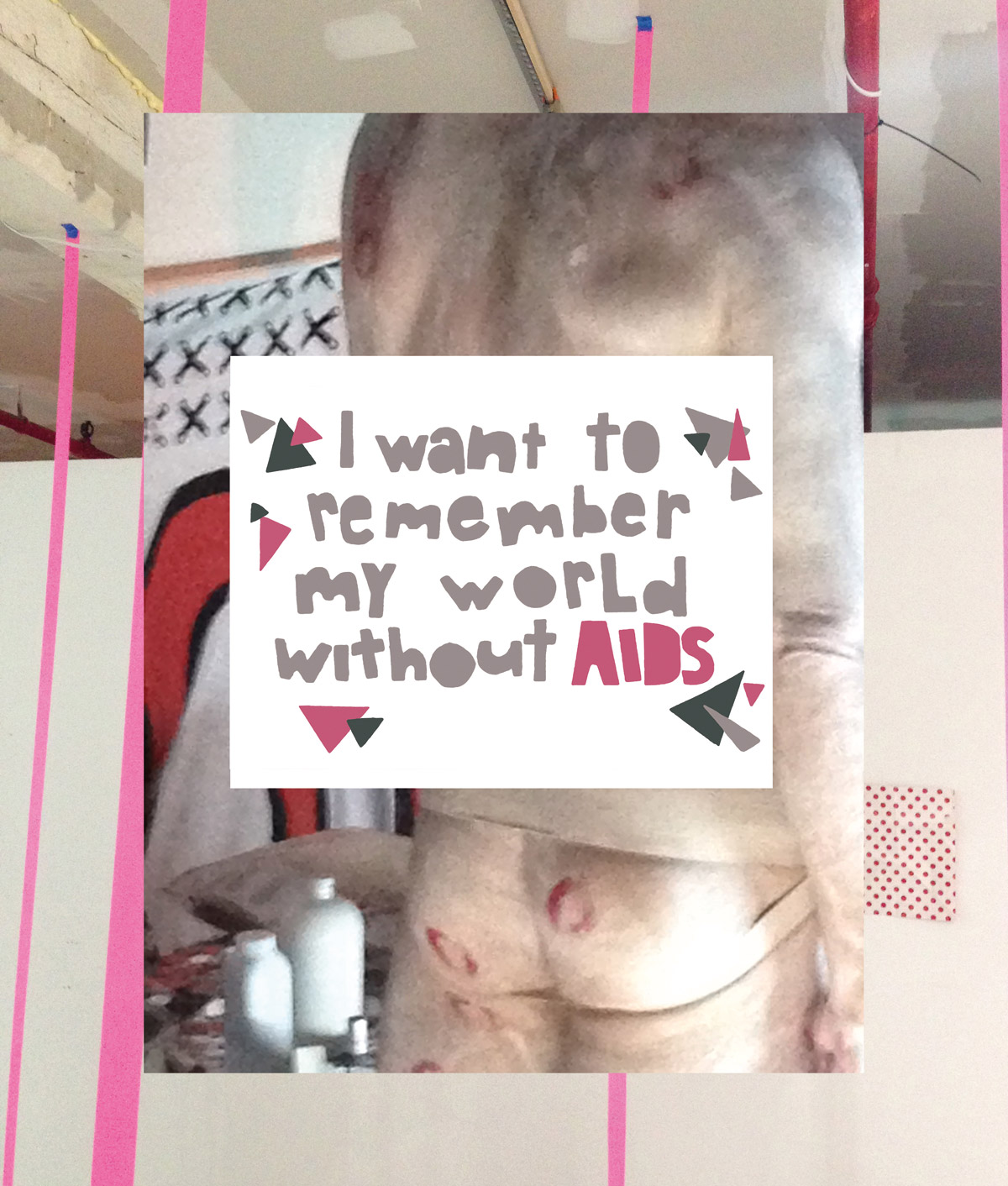 Artist Statement
When asked by Nayland Blake, “What examples of your curating have fed you the most?,” I turned to the Latin root of curate, cura, which means “care,” and I reflected on how caring/curating issues around HIV/AIDS has fed my life and my work. I think about the shared stories of love, community, desire, passion, activism, strength, and survival alongside issues of stigma, race, phobia, silence, injustice, and lost histories—but most of all I think about caring for each other.

For this issue of On Curating, I created a graphic patchwork of visual stories, stitched together like a quilt. They include images from artist projects I worked on at Visual AIDS by Nayland Blake, fierce pussy, Jayson Keeling, Shan Kelley, Michael Mitchell, Chris Johanson, Carmine Santaniello, Kay Rosen, Kia Labeija, and Jessica Whitbread. In these panels are also political and graphic works of other artists I am inspired by—Nancer LeMoins, Joe Brainard, Zoe Leonard, Donald Moffett, Touko Laaksonen, Ben Cuevas, Chloe Dzubilo, Gran Fury, Tony Feher, and Peter Cramer & Jack Waters—woven together with text and images, both borrowed and personal.

Together I hope this mash up of art, culture, recollections and activism reflects some of our stories and the love that happened—and happens—here.

Nelson Santos (he/him) is an artist, curator, and Interim Director of Curatorial Programs at the Leslie-Lohman Museum, responsible for the museum’s LGBTQ-focused exhibitions and collections. He is also Director Emeritus of Visual AIDS, a non-profit arts organization that utilizes art to fight AIDS and supports artists living with HIV/AIDS. Over the years, he has worked with hundreds of artists, curators, and historians to produce and present public programs, exhibitions, visual art projects, and publications.  He has edited multiple artists’ publications including the DUETS series, which pairs artists, activists, and writers in dialogues about their creative practices, alongside HIV/AIDS and social justice issues. Santos has curated exhibitions and screenings at the Leslie-Lohman Museum, NY; the Bureau of General Services Queer Division, NY; The Bronx Museum, NY; The Center, NY; Schroeder Romero / Winkleman Gallery, NY; Miami Dade Art Gallery, FL; and Spin Gallery, Toronto. He received his MFA from the School of the Art Institute of Chicago, and his artwork has been exhibited in New York, Chicago, San Francisco, Los Angeles, Miami, Spain, and Japan.  Santos is a 2018-2019 QAM Mentor in Curatorial Practice and sits on the boards of the Fire Island Artist Residency (FIAR) and Queer|Art.