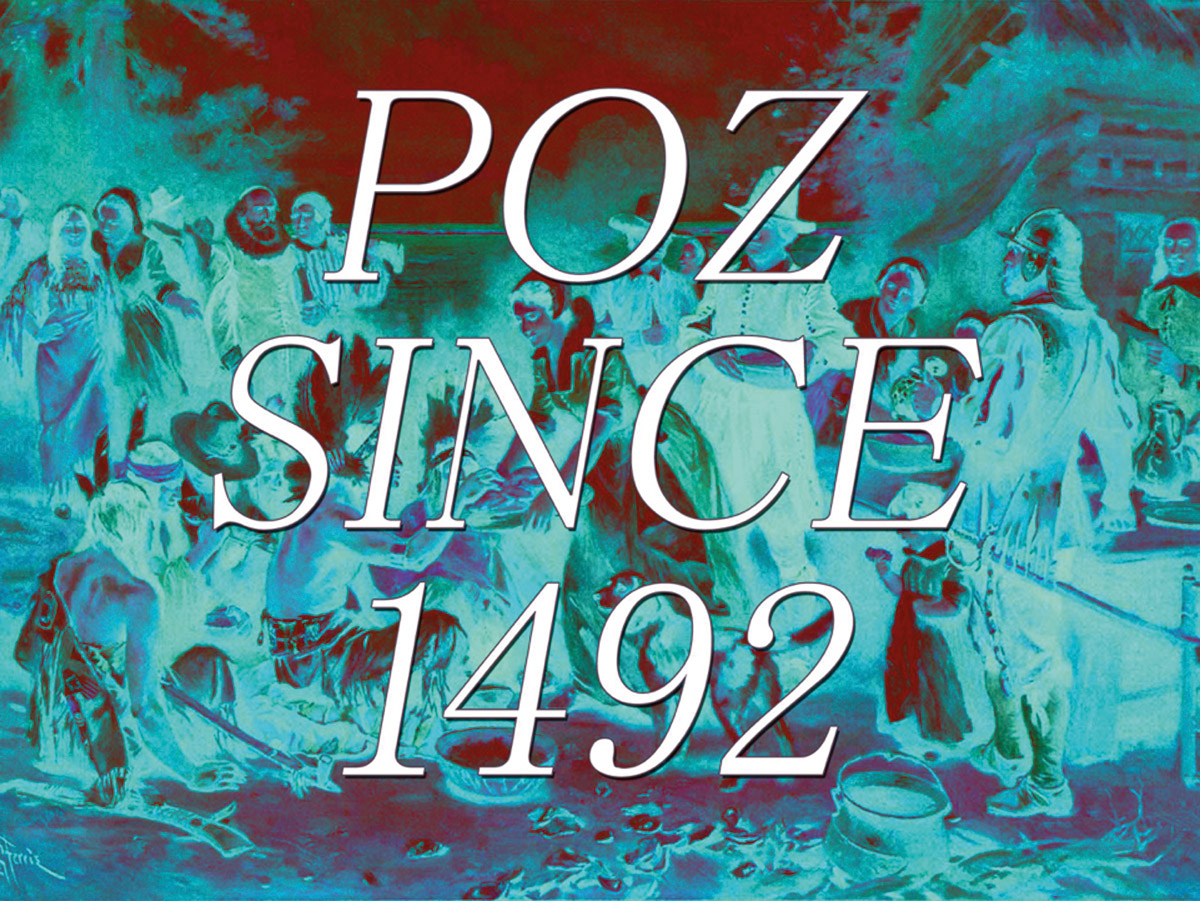 Poz Since 1492, Demian DinéYazhi’ (to learn more about this work, please see below)

The HIV pandemic is not on track to end, and the prevailing discourse on ending AIDS has bred a dangerous complacency and may have hastened the weakening of global resolve to combat HIV.

This is a key finding in a recent executive summary from the International AIDS Society published by the medical journal, The Lancet, on the occasion of the 22nd International AIDS Conference in Amsterdam in 2018. While such documents can feel like report cards, the IAC summary reads like a rallying cry from the belly of the Global AIDS administrative body, begging for attention to be paid to both the ongoing crisis, and how AIDS has been—and is currently being—discussed. I depart from a more traditional OnCurating introduction to share it because I feel that for curators, it is also a good review of how HIV is currently being positioned by the guiding forces of the global response, at a time when almost as many people on the planet are currently living with the virus—37.9 million people—than have ever died with the virus—39 million people.

I am suggesting that before one dives into this issue and reads what artists, academics, activists, curators, critics, and others deeply involved in the world of AIDS and culture are thinking, it is worth it to get a bird’s-eye view of how HIV is being positioned on a global administrative level.

The IAS summary begins broadly—inspiringly even—reflecting on the virtuous goal of achieving sustainable health and development for all, primarily through the global work of “attaining universal health coverage.” HIV is placed alongside tuberculosis, malaria, as well as maternal and child health, as big picture issues that we, as a global community, can address together. Embedded in this message is an argument: HIV is part of a constellation of other global health issues—it is not special. As if to prove this point, HIV does not stand alone in the text until the third paragraph, in a line that deserves unpacking: “Although the number of new HIV infections and AIDS-related deaths have markedly decreased since the epidemic peaked,” the summary authors state, “little progress has been made in reducing new infections in the past decade.”

This two-pronged sentence begins with an acknowledgment that within the span of the epidemic’s first decade, the medical and scientific community went from knowing little about an unknown illness, to identifying it as a virus, coming up with a test, and producing effective life-saving medical treatments (HAART, highly active antiretroviral therapy) and prevention methods (PEP and PrEP). The second half of the sentence—“little progress has been made in reducing new infections in the past decade”—is less dense, but no less intense: globally, when it comes to HIV, a plateau of progress has been reached. While new diagnosis have been reduced by 40% since the peak in 1997, according to UNAIDS, the rate of reduction has slowed since 2010, hovering at about 2 million new cases of HIV a year globally. (2.1 million new HIV infections in 2010, 1.7 million new HIV infections in 2018.)

From there, the summary gets dramatic:

Without further reductions in HIV incidence, a resurgence of the epidemic is inevitable…Allowing the HIV epidemic to rebound would be catastrophic for the communities most affected by HIV and for the broader field of global health.

The point here, as exemplified by the end of the statement, seems to double down on positioning HIV as part of a larger network of concerns, while also situating the success of the HIV response as key to future “global health.” The IAS, in all their power and glory, is wrestling, like many of us, with the epidemic’s meaning and power decades into the crisis, while trying to figure out how to move forward amid the ongoing situation. Key to their concerns seems to be around questions of representation, and how to talk about the plague.

They are not alone, even on the global stage. In 2017, the influential and path-making AIDS research and philanthropy organization American Foundation for AIDS Research (amfAR) released a report that began: “Recent years have seen advocates and researchers forecasting the ‘end of AIDS’ and setting target of an ‘AIDS free generation.’” AmfAR is coming out as being against such language, advising that, “Advocates must guard against declaring that the fight has been won.”

A prime example of what amfAR is talking about comes from the global HIV body, UNAIDS. In 2014, they released their 90-90-90 targets, a trio of stated aims that globally by 2020: 90% of all people living with HIV will know their HIV status; 90% of all people with a diagnosed HIV infection will be on sustained antiretroviral therapy, and 90% of all people receiving antiretroviral therapy will have viral suppression. Currently, the project is not on target. As of 2018, more than 10% of people living with HIV have not had their status confirmed, and of the people that know they are living with HIV, only 62% were accessing treatment, and 53% were virally suppressed.

So, what does this mean? Should UNAIDS give up? Is IAS and amfAR right to be calling for a recalibration on language? What does this mean for all of us, as concerned and contributing members to the global community, invested in HIV?

For me, as someone who has been working at the intersection of art, AIDS, and culture for over fifteen years in the USA and Canada, both within AIDS service organizations and art organizations, and as a writer, curator, activist, and artist, I am invested in thinking about how liberating it may be for AIDS movements to consider how it is too late, too complicated—and stigmatizing even—to “end AIDS.” As I see it, standing between that goal and the truth are the millions of people living/suffering/thriving with HIV, specifically, the 8.1 million people living with HIV globally who do not know or wish to confirm their positive status. We don’t know who the latter group of people are per se, but we can assume they don’t take to social marketing, public health messaging, or any other mass media intervention that may bring them closer to the AIDS response or treatment. And we can assume that they are a heterogeneous group that, while not having much in common beyond their positive status, are doing their best, and nonetheless—like everyone else—weighing their best options at a good life, a meaningful death, and some joy in between.

In thinking about this group, who may or may not be big museum-goers, one is invited to consider how the bulk of AIDS cultural production lies far outside what currently will ever appear in most exhibitions about the epidemic. Paintings, videos, photos, performance ephemera, and a smattering of approved activist and AIDS service paraphernalia are what currently serve as the bulk of AIDS representation in most museums and galleries, all of which are nothing compared to the digital and analog detritus of state public health messaging, news reports, fundraising calls, NGO reports, and pharmaceutical advertising that make up the bulk of HIV-related public communication. This feast of work is not only sadly under-exhibited, it is also under-theorized and not meaningfully considered enough since the work of Cathy Cohen, Simon Watney, and Cindy Patton in the 20th century.

These neglected troves of AIDS ephemera, along with the shift in global AIDS discourse, and the 8.1 million HIV-status-refuseniks tell us something when we look at them together. They signal not only that we need a cultural shift when it comes to the epidemic, we are indeed, already are living within one. It is this fact that fuels WHAT WOULD YOU DON’T KNOW ABOUT AIDS COULD FILL A MUSEUM.

Artist statement from Demian DinéYazhi’
POZ SINCE 1492 (alternate title “The First Infection”) is a digital print I created in 2016 that digitally manipulates a painting of the first Thanksgiving “that really situates the AIDS crisis in a larger transnational historical tendency of disease and plague to be the by-product of white colonization [Christopher Columbus reached the New World in 1492].” - Danny Orendorff (curator of One day this kid will get larger at De Paul Art Museum). This work was shown in the exhibition, One day this kid will get larger, and was written about in the October 2017 issue of Art in America by manuel arturo abreu : “The artist, who often addresses the HIV crisis, coined the phrase ‘POZ SINCE 1492’ to reframe the discussion. His efforts shift attention away from racialized victim-blaming and onto settler colonialism, an ongoing ‘infection’ that physically and conceptually afflicts Natives and other people of color.” See more of Demian’s work in the SEEING section of this issue.

– For HIV statistics used in this text, visit UNAIDS:
https://www.unaids.org/en/resources/fact-sheet

– Other sites for HIV statistics:
https://aidsvu.org/

– The amfAR report can be read at:
https://www.amfar.org/how-cures-can-fail/