For the living, there is no constituency as formative as the dead.
- by Dagmawi Woubshet[1]

Relinquishing judgment is a subtle invitation to cede control. Anxious discernment gives way— in a moment that lasts perhaps as long as a prayer— to a steadying recognition of the boundaries of ego, the outer limits of our capacity to know. This meditation on human inadequacy in the face of divine systems of knowing— across a wide range of religious traditions— is at its most revelatory before an altar. So, I begin my sit with Lyle Ashton Harris’ Today I Shall Judge Nothing That Occurs: Selections From the Ektachrome Archive at one of the many Polaroid photographs of personal altars he creates over time.[2] The 1997 image “Altar, Koreatown (Journal #1)” is at the center of a blank lined journal page opposite a mantric seven-word seven-line poem in red ink (“Today/I/Shall/Judge/nothing/that/occurs”) that, though untitled, lends itself to the title of this compendium of photographs.[3] At once an archive of traces left at the tail end of the twentieth century and a divination table set with thirteen years of images (from 1988 to 2001), this queer collection of time’s remains is in many respects also a testament to the complicated artistry that is black gay resilience while living with HIV— as do a disproportionate number of black gay men in the United States.[4] As a black gay (sometimes “queer,” when I am at my rebellious best) poz discipline of artists like Harris, this altar-conscious testimony is a vital reminder to embrace the imperfections of truly living with HIV.[5]

Lyle’s altar is a blur of what may be three lit seven-day candles (white, red, blue), a potted aloe plant, a Toucan carved from wood, the fibrous face of a mature coconut, a fleshy black-skinned figurine dressed all in white, a fallen web of beaded adornments, and a photograph— largely lost beyond the polaroid’s frame— curling slightly in upon itself on the wall. But these could just as easily not be. The altar preserves its secrets (in shadow and out of focus) so expertly that maybe the few objects I can just barely decipher intend to tell me a story to which the many other talismans refuse to lend themselves. Perhaps they have stories for you alone— ghost stories that summon Albert Sidney Johnson, Jr. (a photographer who was also Lyle’s grandfather) and a generation of black gay men snatched by AIDS-related illness before anyone could catch their breath long enough to mourn them properly.[6]

Standing at an altar at a cultural crossroads in the center of one of the circum-Pacific’s most cosmopolitan cities— the “K” in K-Town becomes a visual metaphor for this crossroads if we look closely— the seven-line mantra promises that judgment shall have no place in the sacred order of this day. This untitled poem cum title also provides instructions for how to approach the untidy oeuvre of a black queer poz phenom eager to be in so many places at once: New York (the Bronx, Fort Greene, SoHo, the Catskills), San Francisco, Los Angeles, Washington, D.C., upper Baja (Mexico), Martha’s Vineyard, San Diego, Valencia, Vancouver, Venice, San Juan (Puerto Rico), Santa Barbara, Vatican City, Berlin, London, Oakland, Berkeley, St. Kitts, and Nevis. The itinerant artist finds home in the photograph, an orienting technology that he holds precisely at soul center like a compass in the 1997 polaroid portrait “Lyle (Journal #1).”[7] What if Lyle has always lived at the crossroads— master trickster that he is— and these captured flashes offer us evidence exactly three decades hence?[8]

If the artist uses his medium as common ground between Spirit and flesh, then it serves as a kind of altar to the (after)lives just beyond the camera’s frame.[9] But objects have afterlives, too— even objects beyond recognition— living beyond their intentions in one moment toward an array of possibilities in the next. Centering a selection from the artist’s over one-hundred kept journals— repositories of his photograph-laden fieldnotes on a life still being lived— turns the camera on this raw material.[10] These mundane to-do lists, affective impasses, snippets from newspapers or softcore rags, lists of longings, found and cherished images, impromptu poems, preliminary poses, and candid test shots would make the more public work possible, coherent, and unrelenting. Journals #1, 6, 8, 19, 75, 76, 78 and 81— with entries from 1997 to 2000—resist straightforward temporal logics in favor of circuitous queer anti-chronologies. These notebooks capture the field of experiences that make the photographs beyond the journals more deeply legible at the same time that they document frontiers of influence and connection just beyond the sightlines of Lyle’s formal work.

These field journals and the Ektachrome archive they at once inform and inhabit are in conversation— by virtue of medium— with a vast archive of photographs and travel writing that the National Geographic Society first began publishing in 1888, exactly one century before Lyle’s earliest images in this catalogue. This once academic journal turned popular travel magazine— at the intersection of fine art photography, world cultures, and the natural sciences— had for decades owed the distinctive look of its images to Kodak’s Ektachrome brand of film, preferred for color photos that required swift shutter speeds. The film’s less technically intricate processing made it a favorite among professional and amateur photographers until Kodak began discontinuing it in late 2009, only to completely phase it out by late 2013. To the deaths of so many of Lyle’s subjects in his Ektachrome archive— at once haunted by and attempting to exorcise the spectacle of “otherness” in National Geographic with his own queer mundanity— one could have added the final death of the film medium. But death is never a finality.

Kodak’s decision to reissue its Ektachrome line— rumoured to begin sometime in 2018— provides an apt allegory for spiritual continuity despite seeming rupture; in essence, death as a moment of transition and not as an end in and of itself. This afterlife for the dead requires a different relationship to what literary theorist Dagmawi Woubshet calls “the calendar of loss,” in his book of the same name about mourning in the early era of AIDS— roughly the same decades Lyle’s catalogue inventories.[11] Woubshet captures the moment in which AIDS forces a temporal reorientation to loss for early AIDS activists— many of whom were themselves poz in a time when HIV/AIDS was a death sentence— who became intimate with the realization that each tragic death they tallied (of lovers, family, and friends) foreshadowed their own.[12] But death is never a finality. The persistence of Spirit beyond flesh is an invitation to cede control, to relinquish judgement because we cannot know the hereafter or the promise of reissue it may hold. In offering us his altar and a simple prayer, Lyle Ashton Harris’ Today I Shall Judge Nothing That Occurs: Selections from the Ektachrome Archive at once reassures and warns us that even death cannot keep us apart. 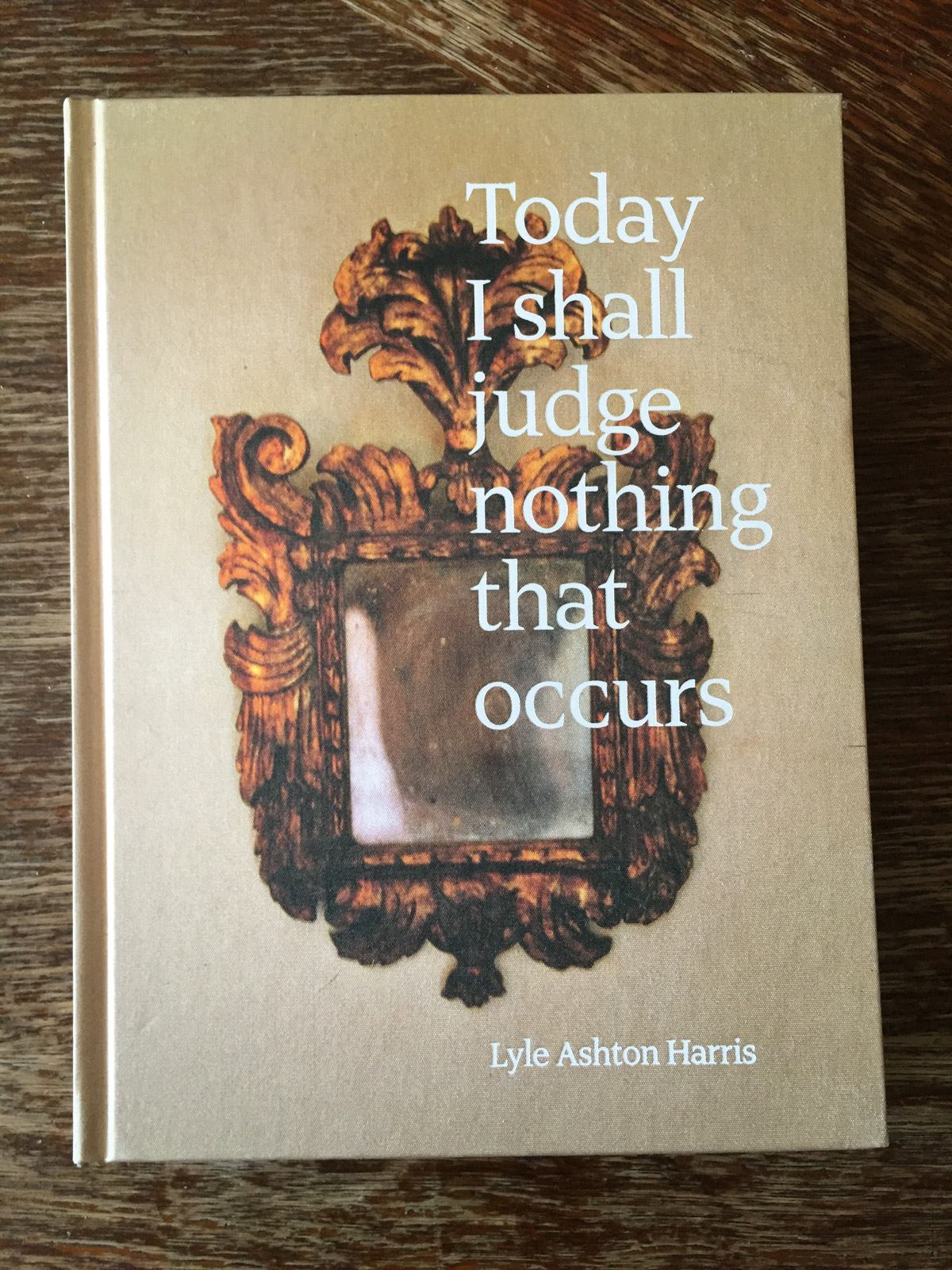 Today I Shall Judge Nothing That Occurs:
Selections from the Ektachrome Archive.
New York: Aperture Foundation, 2017.
U.S. $60, hardcover. 295 pages.

5 Black gay openly HIV+ artist rebels like Harris and the masterful dancer and choreographer Bill T. Jones continue in an enduring spirit lineage that includes the formidable poet and essayist Essex Hemphill, the tour de force poet, playwright, essayist, and performance artist Assotto Saint, and the daring filmmaker and cultural critic Marlon Riggs (to name only a few). This black gay poz artistic avant-garde has literally and figuratively provided both the road map for my own continued survival and the template for my community-building as co-founder/facilitator of The Woodard Circle, a social support group began in 2016 for black poz men in Austin, Texas, named in honor of black gay poz scholar and artist Vincent Woodard (1971-2008). And in a modest homage to these artists, I feature them prominently in one of my newest, most beloved and deeply challenging courses: “HIV/AIDS, Activism & the Healing Arts in the African Diaspora.”

8 Vince Aletti, “When the Mood Takes Him,” in Today I Shall Judge Nothing That Occurs, 52.

11 Woubshet, The Calendar of Loss.