For seven years, my friends and I ran a party named “Drunk At Vogue,” an event that was inspired by our love of 1970s disco, our own contemporary queer performance community in Manchester, and the residue of Manchester's epic party years of the ‘80s and ‘90s. Our final event took place on World AIDS Day 2017—with perfect synchronicity, since as a collective of queer people we understand the ways HIV/AIDS has shaped our lives and culture. 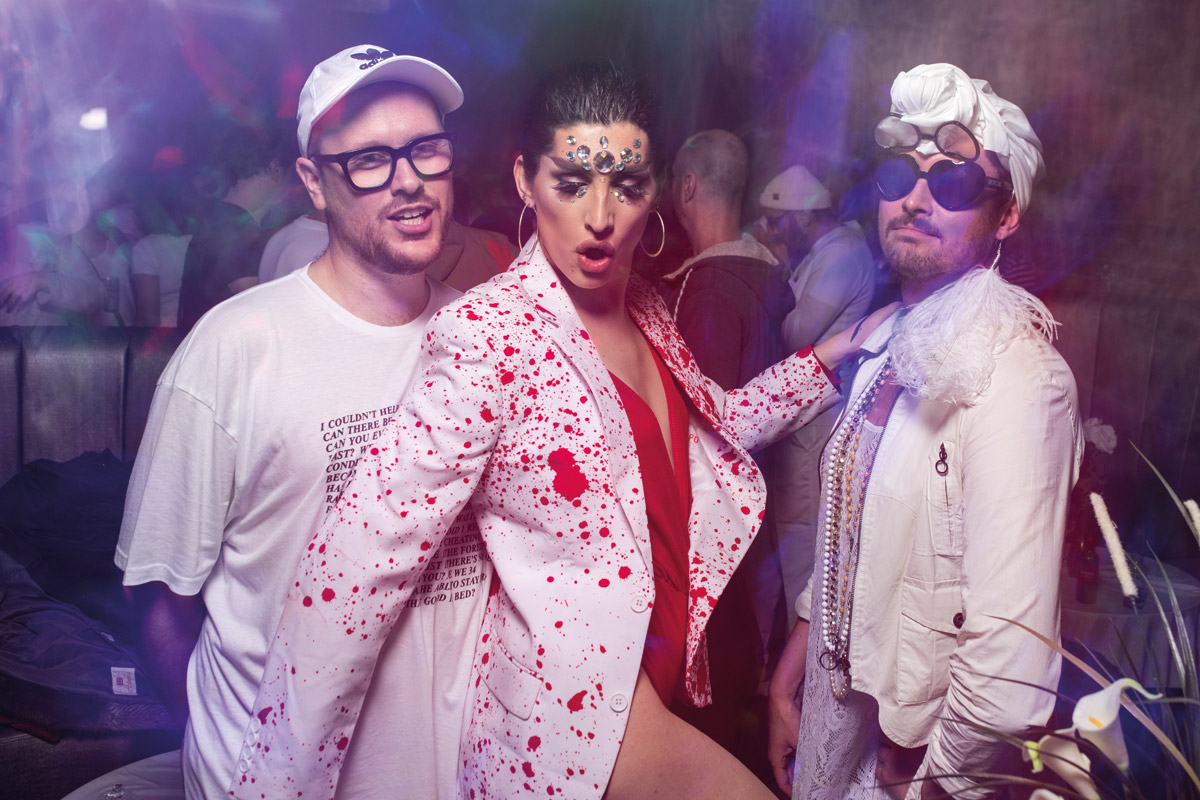 From my young teens onwards, I was inspired and influenced by New York culture, and as I gradually came into my identity as a gay person, I was able to more fully acknowledge and embrace the queer aspects of this culture, which had and continue to have a huge impact on me. This happened via cinema, fiction, art, biography, documentary, as well as through music and nightlife culture, and eventually led me to the culture that surrounded the early years of the AIDS crisis, so that learning about disco, house, AIDS, and ACT UP happened with simultaneous force in my life.

As I reached my late 30s, surpassing the average life expectancy of many gay men in the peak years of the crisis, I began to think about a responsibility to remember and honour the lives, deaths, and activism of my queer forerunners. As an arts practitioner, I have tried to incorporate this into my creative and curatorial work. For example, my ongoing project “A mile of black paper” is based on an ACT UP demonstration in which the seminal AIDS activist group protested the New York Times’ dismal AIDS coverage by jamming their fax machine with black paper in order to get them to pay attention to AIDS. This work takes the form of a teach-in, presentation, or performance, resulting in collaborative works of art which to date have been displayed at sexual health clinics, galleries, academic conferences, museums, and queer arts festivals.

In 2017, Drunk At Vogue: The Last Disco was the climax of Manchester’s first Day With(out) Art, a programme I curated via my role as coordinator of Superbia, the arts and culture project from Manchester Pride. As a collective, Drunk At Vogue understands AIDS to be part of disco and house culture, and wherever this culture is referenced, so too should the epidemic be meaningfully remembered. Within the city’s contemporary club culture, this rarely happens, and even in our own queer underground (often repped by straight white cis guys) it is rarely factored in. Drunk at Vogue has always hoped to be a corrective to this erasure, and our final night gave us the opportunity to go big with this intention. We drew on collective influences to shape an event that would simultaneously celebrate memories; grieve the end of an era (this final disco and all final discos); say thank you to the party faithful; and mark a new era.

Bringing together this cocktail of influences gave us the idea to make it into a “white party,” influenced in part from the Pet Shop Boys’ song, “Being Boring”:

“I came across a cache of old photos
And invitations to teenage parties
‘Dress in white’ one said, with quotations
From someone's wife, a famous writer
In the nineteen-twenties…”

The white party also references parties of the ‘70s, in particular those at The Saint—“The Saint's Disease,” an early euphemism for AIDS—and the subsequent epic Miami AIDS fundraisers. “Being Boring” continues with a painful plaintive refrain on absent friends and lovers:

At the same time, as we were planning our final party, the introduction of PrEP in Manchester had been delayed yet again, and was about to be rolled out in limited trials. Local press had carelessly described PrEP as “controversial,” in spite of its universal medical support, thus feeding a damaging narrative of preventative medicines as “lifestyle drugs for promiscuous gays.” Around 5,000 people live with HIV in the Greater Manchester region. Access to medication is free, and there are a number of dedicated services supporting and advising people living with HIV, such as the LGBT Foundation and George House Trust, though funding cuts have affected some of the most impactful projects from these organizations. Late diagnosis is an ongoing issue, stigma is rife, preventing people from testing, and making disclosure difficult. These issues are magnified in communities of colour.

Activism and nightlife are not easy bedfellows. Escapism is often the lifeblood of the dancefloor, perhaps more so for queer people than anyone, but I do believe there are always means to creatively engage on a dancefloor, as we have often done with Drunk At Vogue, queering venues, putting trans bodies into cis spaces, remembering the epidemic, and so on. In a club setting, a moment of engaged drama is often the most meaningful thing you can reach for, which can then of course resonate for a lifetime. (Manchester in some ways has been built on this). Firstly, of course, you have to build your community, another thing clubbing is very effective at.

At The Last Disco we did our best to counter AIDS stigma by making it a place of HIV+ culture. Using literature from the LGBT Foundation, we were able to support and share their U = U campaign materials, as well as raising money for George House Trust throughout the night, and papering our all-gender bathrooms with PrEP literature. Nobody left our event without seeing the U = U message or being asked for donations to support HIV+ people in our community! Midnight arrived, and the club was full of beautiful people dressed in white, a room of both ghosts and friends dancing together, uniting the past and the present. I gave a speech from the balcony while “Being Boring” played, and I looked over our queer family and spoke affectionately of seven years of hedonism, adding:

“Today is World AIDS Day, and we want to pay tribute to the divine artists who we love and who have influenced everything we have done at Drunk At Vogue. We want to big up George House Trust who every day help people in the North West living with HIV. For Manchester's first Day Without Art and for our Last Disco, let's remember the pioneers without whom our world would have been a much duller place."

A digital projector then cast enormous photographs of our roll-call icons across the twenty-foot walls of the venue, as I read aloud these names: “Juan Ramos, Robert Mapplethorpe, Tony De Vit, Leigh Bowery, Liberace, Gia Carangi, Eazy E, Steve Rubell, Cookie Mueller, Klaus Nomi, Derek Jarman, Rudolf Nureyev, David Wojnarowicz, Halston, Arthur Russell, Keith Haring, Freddie Mercury, and Our Queen… Sylvester.” In this way, one era gave way to another, and to another, and as “You Make Me Feel (Mighty Real)” played for the final time, we all danced to mark their passing.

A clever old raver once said, “You can learn a lot more than you think on the dancefloor,” and I believe in nightlife as a meaningful place, of community, influence, and change, while also seeing the limits of what can be achieved under disco lights. As an artist and organizer, I see how in Manchester nightlife can help to sustain a community, which is vital and which makes other things possible, and I can’t wait to see what comes next, who comes next, and what happens when our communities are able to survive and thrive.

Greg Thorpe is a freelance writer, curator, artist, and DJ based in Manchester, UK.