While often subjects within exhibitions about the virus, people living with HIV are seldom centered as visitors to exhibitions about the virus. Such was the case in 1993 with the Brooklyn Historical Society (BHS)’s AIDS / BROOKLYN, an exhibition conceived of by BHS’s executive director David M. Kahn. According to exhibition literature, Kahn felt that at the time museum exhibitions created in response to the crisis had not dealt with the disease in a way that was comprehensible to the general public. In response, he wanted BHS to make an exhibition that was rooted in “the daily lives of people affected by AIDS.” Curated by filmmaker Robert Rosenberg (Before Stonewall: The Making of a Gay and Lesbian Community), the exhibition included oral histories of Brooklyn residents living with and impacted by HIV/AIDS; ephemera from the front lines of the epidemic in Brooklyn procured largely by a community advisory board and partnering organizations; and local AIDS education material.

For Kahn, the exhibition was personal. As he often noted at the time when talking about the exhibition, his partner Ron Rosenberg died with HIV in 1991. Kahn’s lived connection to the virus comes through in the document below, a memo to all BHS staff that was part of “the blue binder,” BHS’s staff orientation for all exhibitions.

I came across Kahn’s memo a few years ago when I had the chance to index the AIDS / BROOKLYN oral histories in anticipation of historian Julie Golia’s 2019 BHS exhibition,Taking Care of Brooklyn: Stories of Sickness and Health. Upon reading the memo, I was moved first by the candor of a person in his position on such sensitive topics such as love, death, and loss; but more so I appreciated how Kahn used his position to center the needs and comfort of people living with HIV. Even when addressing fears—highlighted by an unknown person in this surviving copy of the memo—Kahn is thinking about how precautions impact people living with the virus.

In reading the memo, it becomes clear that every exhibition is not only an opportunity to engage with the public, but to also do outreach and education within an institution.

The memo appears courtesy of the Brooklyn Historical Society. 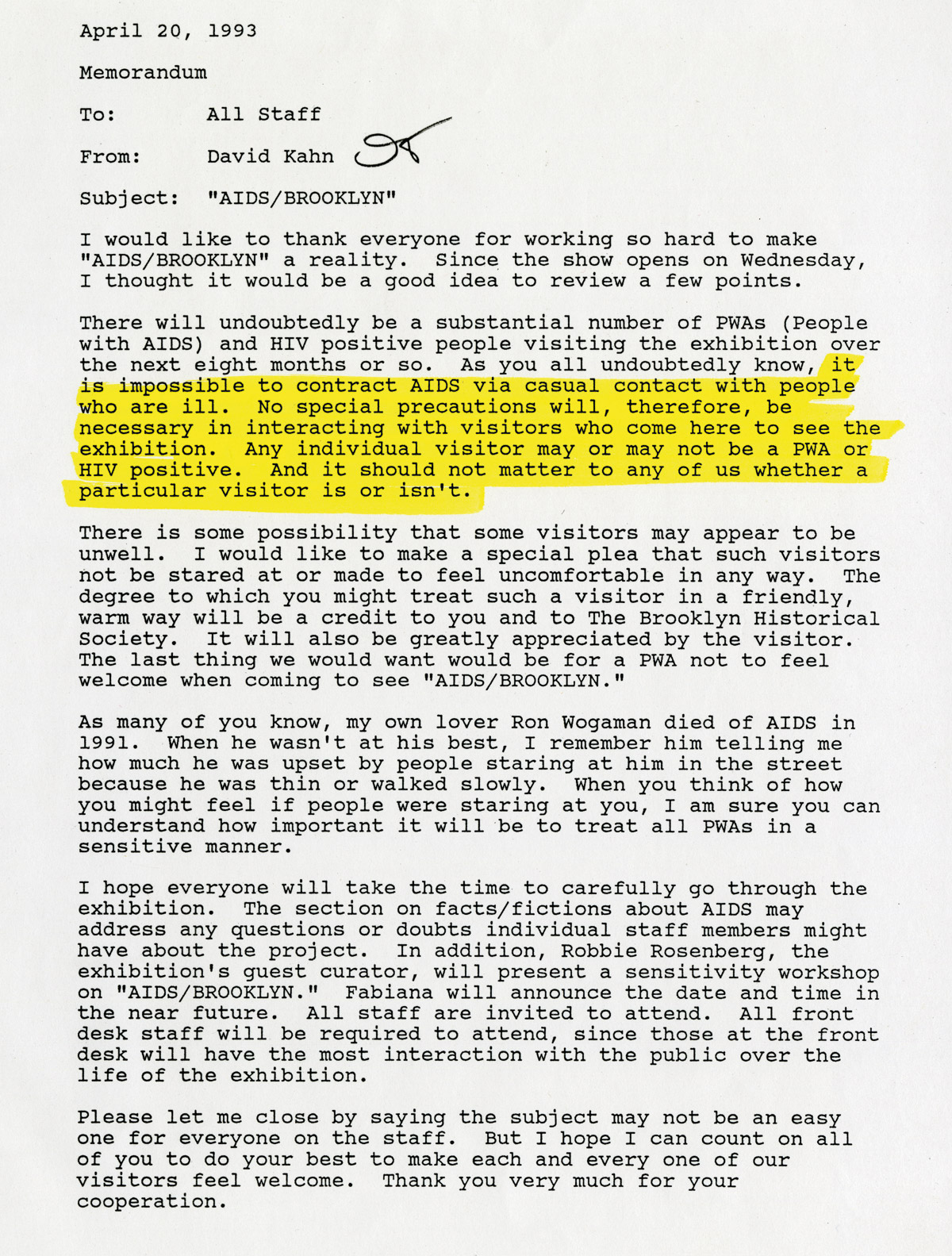