In his 2017 site-specific work DEUS IN MACHINA,[1] scenographer Lukas Sander created an immersive sound installation in a historical gas tank in a suburb of the city of Zurich: the gasometer in Schlieren, the remains of an industrial site built at the end of the 19th century. Inside the cylindrical gas tank, the artist created a dystopian theatrical setting which the visitor was invited to explore. Once entering the gas tank, the audience suddenly finds themselves in another world. Rusty boots, scale, and buckets lie scattered, and 15-metre-high scaffoldings stand in a bottomless-like pool of water. An unmanned boat floats on the surface. Taking further steps down the stairs into the uncanny situation, the audience witnesses the whole complexity of mechanical structures in a fog. One must wonder what is real and what is fiction here—it looks as if time stopped some time ago. Despite being an institutional operation (by Theaterhaus Gessnerallee Zurich), its public access was subject to limitations. This interview was conducted to discuss the challenge of working not only with topographical but also metaphorical remoteness, in the context of theatrical approaches to installation-making. 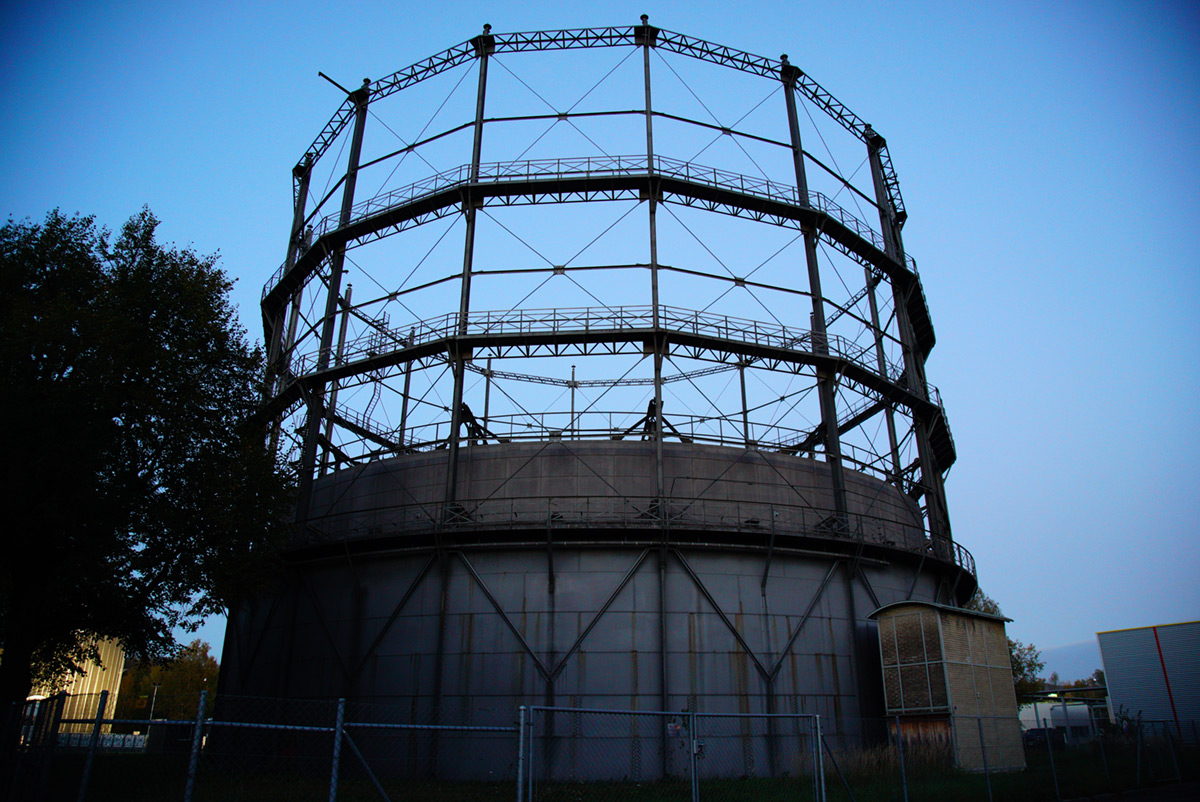 Miwa Negoro: Could you tell us how the project in such a specific location started? What got you interested in working on the site?

Lukas Sander: It was spring two years ago when I visited the neighbourhood for the first time. I was always curious about the area, which was an edge of the city, wondering what comes after Altstetten or even after Schlieren. Looking at the Google map, I knew the gasometer stood there. I was scouting possible sites by bike, which I actually often do, and I was checking out the surroundings—old factory-like buildings, etc. I thought it could be interesting to look inside the gas tank, because there might be very special acoustics. It took some time to actually reach the key person who later showed me inside. I still remember when I entered the space for the first time, and I instantly got interested in its atmosphere. The boat was floating in the water. I thought it looked not only like a theatre but almost like an opera stage. So, it was a kind of coincidence that I found the space.

MN: How did you start working with the existing space and materials? Could you elaborate on the production process?

LS: I did a lot of research about the gasometer and asked people who still manage modern power plants. I did not find that much online, but the wife of a former worker gave me a lot of information. My research covered the industrial history in general, and I realised that there weren’t that many gas tanks like it. For example, there are quite a lot of them in Germany, but not in Switzerland. The other part of the “research” was more practical: simply spending time there, testing acoustics and lighting, trying to manipulate, hack, or amplify the found conditions of the space with the sound composer Christian Berkes. You can’t change the existing structures, and the first thing was actually taking away all the trash and things I didn’t need. It was a rather subtractive way of working.

MN: The title seems to refer the plot technique “Deus ex machina,” which is used for an unexpected intervention. At the same time, considering the site as a former symbol of modern achievement, it may imply questions about the advances and limits of technology. What was the idea behind that? How did you engage with the history of the site and develop it into your scenographic thoughts?

LS: It was rather an abstract kind of thinking that formed the installation. On one hand, the title refers to an invisible means of theatre, that is, an effect of invisible energy. On the other hand, the place itself is a former gas tank, a container of invisible energy. A person who works at the adjacent gas power plant told me that it could still work. Whether this is true or not, the place is abandoned but active in a way. I like this correlation between theatrical and industrial. I also thought about the mythology and meaning of “rusted.” Also, sounds play a significant role in my work.

Nothing makes any noise inside; however, since a railway passes nearby, one hears its acoustic event being stretched. This contributed to the experience with a sense of stopping time. You hear the outside through the filter of the steel structure that has stretched and slowed time down.

MN: Even though the sounds enhanced its theatricality, there were no linear narratives within the installation.

LS: It is more of an atmospheric construction than a narrative. The audience doesn’t really know if it is fictional or real, what is a part of the installation and what is not. I prefer to provide the freedom to spend time, find your way, and experience the present of the site. The installation was minimalistic and immersive, but there was a lot of freedom to think on your own. Also, there was no information, neither speech nor text. I hope the in-between experience spoke to the audience more than what was told.

MN: In fact, access to the installation was limited. The tank could not accept a large audience at one time; however, such a restriction ultimately made the experience unique and relocated the position of the spectator. The audience could explore and stay in the situation as much as they wanted, while at the same time they had to decide and find their way. Could you tell us your thoughts on such a position of the visitor?

LS: The position of a visitor is similar to that of me entering the place for the first time: discovering a site, finding things on your own, and building your narratives. One visitor recounted the experience as going to the place to die and letting oneself decide whether to go further or not. American playwright Gertrude Stein describes theatre as landscape, that you can read them on your own. In the theatre, there are so many levels and layers of signs and metaphors, she said, and time lags occur. In my work, just simply sounds exist and you are invited to explore.

MN: In a way, your installation uses an urban space as a theatrical stage. How do you see the potentiality of using a historical site in the city, instead of being in an institution?

Lukas Sander: In my work, everything is not always constructed. There are things which exist already at the site, and the installation shows what could happen. The aim of my approach is not constructing an absolute setting under my control, but rather a state of in-between by adding fictions into a reality. Yet, a pure realism does not interest me. A bit of theatrical method is needed in this sense to let a poetic realism evolve in your perception. In my past work ENDE DER WELT (2012), taking place at the edge of the city under the highway where people normally don’t go, the visitor heard the noise of the highway, and they would witness the car that looked as if it had dropped from there. I am always surprised at how much can be believed. Also, because of looping sounds, the audience wouldn’t know when such a situation started. There is no beginning or ending. A place does not care if one comes or not. The line between what is constructed and what is not is blurred. Only then can an atmospheric construction function. Such a suspense of what is real or fictional can only be created by a location outside of institutions.

MN: What is the challenge for such projects?

LS: The most important but difficult thing is to find the right place. Instead of starting from text as scenography normally does, I want to find a place first, and create possible narratives out of the place. A visitor feels natural and at the same time unnatural, because it is amplified.

MN: The audience needed to be picked up at the meeting point and transported to the site by car. How do you see remoteness as such, and why do you think remoteness is significant for your work?

LS: The car transport was an institutional necessity to realize the work, but of course the journey already set a mood. (For DEUS IN MACHINA, a radio in the car played Orfeo by Monteverdi.) Remoteness has been a key element of my works, and it indeed brings the theme a conscious edge of knowing the city. However, I don’t necessarily need remote, derelict, or old sites. I could also imagine doing a project in a clean office in the city centre, for example. My focus is rather the poetics of secrecy, unknown and unusual. It is not about a topological distance.

MN: Would you say your focus is not historical importance but rather invisibility in the city?

LS: Absolutely. It is important to know the history, and some details and ideas of the objects placed in the installation have something to do with the site specificity. But the work itself does not have to explain the history or anything. Leaving the space empty but filling it with sounds that evoke images rather than objects. I’m trying to seek the right way to build emptiness. It is invisible but strong. 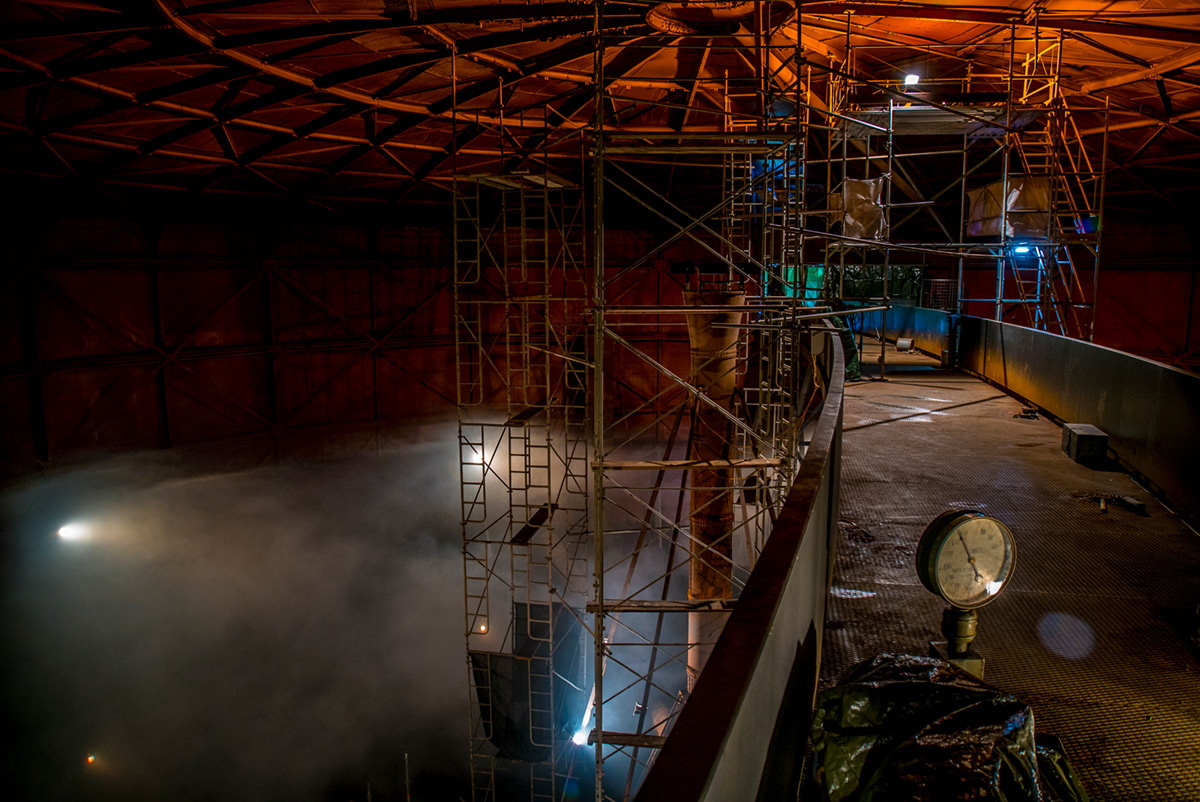 Lukas Sander (b.1983 Berlin/DE) studied scenography and exhibition design at the Staatliche Hochschule für Gestaltung Karlsruhe and in the master's program Theatre/Bühnenbild at the Zurich University of the Arts (ZHdK). Since 2008, he has worked as a stage and costume designer mainly in Germany and Switzerland, and he creates scenographic sound installations in artistic contexts, including the Biennale Bern in 2014. Sander is a founding member of several artist groups and associations in the independent theatre scene in Switzerland. Currently, he lives in Zurich. http://www.lukassander.com/

Notes
[1] A production of DEUS IN MACHINA in 2017 by Lukas Sander in coproduction with the Zurich University of the Arts and Theaterhaus Gessnerallee Zurich.