In the summer of 2018, artist Ernesto Neto (b. 1964, Rio de Janeiro), in collaboration with Fondation Beyeler, presented GaiaMotherTree—a monumental installation in the middle of Zurich’s main station. The twenty-metre-high tree-like sculpture was made of coloured, hand-knotted cotton strips and was realized in collaboration with the Huni Kuin, an indigenous community living in the Amazon. The work was open for the public to walk inside it, meditate, and interact with it.

Curator Damian Christinger received a phone call asking him to assist his old friend Ernesto Neto in curating Assembleia MotherTree—a two-day assembly convened in the GaiaMotherTree tent and at the OnCurating Space in Zurich. Delegates from a few Amerindian communities—the Huni Kuin, Yawanawa, and Tukano—were invited to the Assembleia, together with scholars, artists, students, and activists from many parts of the world to sit together in the tent and talk, dance, and sing on the future of our planet.

I invited Damian to have a conversation about the risks and opportunities of inviting people from the Amazon to Zurich. While researching and questioning the dichotomy of centre-periphery in the art world, I wanted to start by looking at the city where I am based and where this issue of OnCurating is written and published, as a case study of positioning oneself on this axis.

MB: What attracted you in the first place, as an individual, to travel to the Amazon and to contact/explore tribal communities?

DC: It was a coincidence, as it always is. I was working in Bolivia for an organisation working with street kids, and one of my friends who was half Guarani, half Bolivian, proposed to go visit his people and homeland. I was nineteen and up for anything, and I ended up staying there for three months. I was completely useless for them as a young Swiss man because I didn’t know how to hunt, how to move, how to speak the language, and I found everything dangerous. On the one hand, I was futile, and the jungle was hot, humid, noisy, and gave me many diseases and bodily reactions. On the other hand, it felt like coming home.

MB: In your essay, “Beyond Anthropology: Art, History, and the Unbearable Longing for a Nondual Existence, or Tru Tru, Udu, Udu,”[1] you have written, from an historical anthropological perspective, about Western societies’ longing for a non-dualistic experience. Did you share the same desire to free yourself from the Western dual experience back then?

DC: I am not there to find something that I am missing here. I am not a religious person, and I find it impossible to understand spiritual feelings. There are spiritual places in the world in which I cannot even stay. Jerusalem,[2] for example—I had to leave after one day because it made me physically sick. People in the Amazon don’t have missionary zeal. 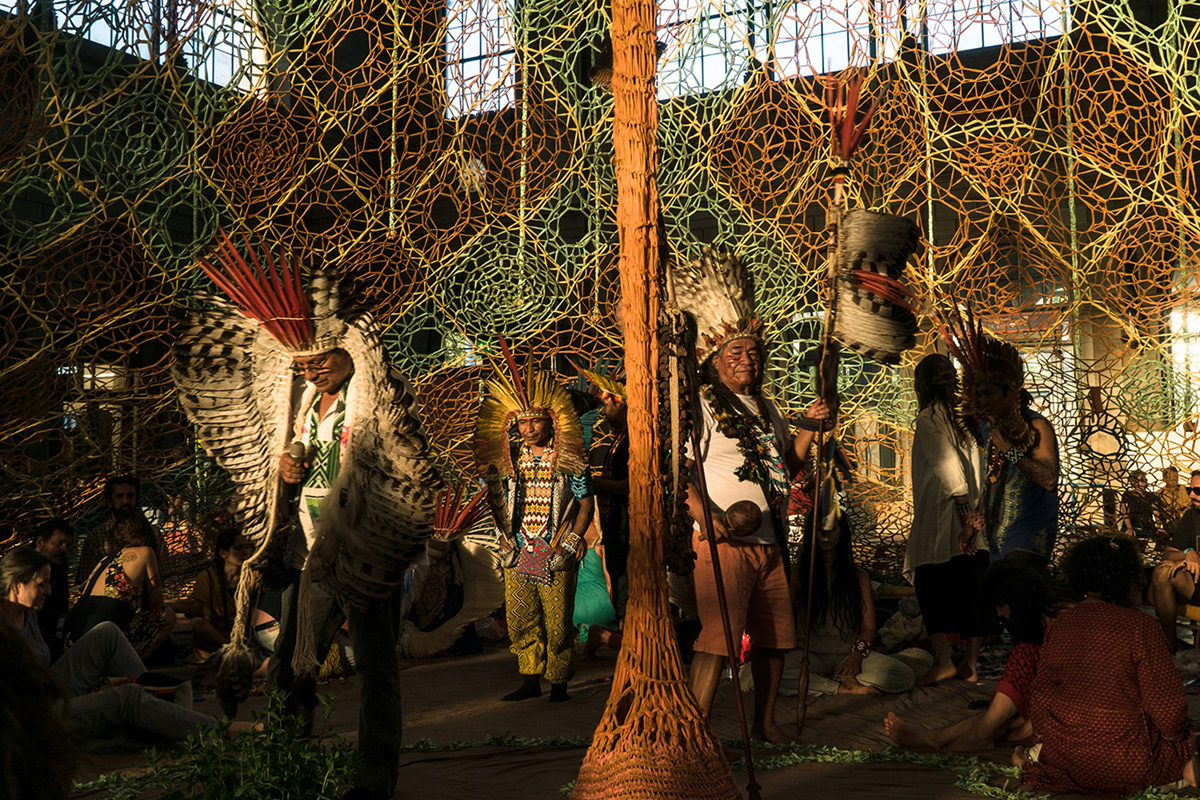 MB: So, what was their motivation for coming here to Zurich, if they didn’t have a message to share?

DC: The fight that they are fighting for land, resources, and freedom is not something they can do only within the Amazon anymore, because what we do here in the West affects them. Their way of solving problems is by engaging—sitting down with everybody and talking it out. Then, they can go back to the way they want to live. First, they need to solve climate change.

MB: Do you also feel this urge to solve climate change?

DC: I do. I don’t believe it can be done, but I am willing to engage with everybody who tries to.

MB: I would like to quote one of the many critical reviews of Neto’s work, Um Sagrado Lugar (A Sacred Place) from the 2017 Venice Biennale:

Not since Europeans brought indigenous people back from the Americas or Africa to keep as courtly pets or exotic curiosities has it been so fashionable to display the dispossessed and disadvantaged. Is this a disturbing new trend in contemporary art?[3]

How did you approach the obstacles of bringing indigenous people to Zurich? 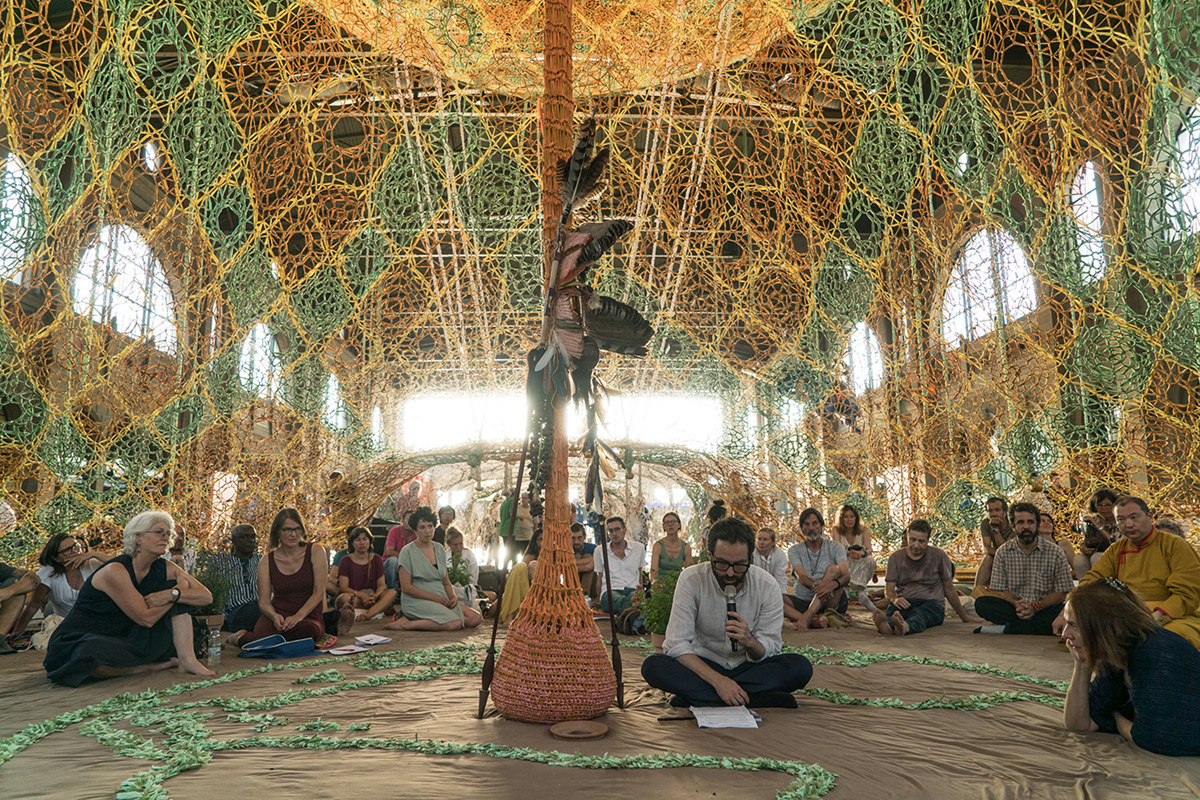 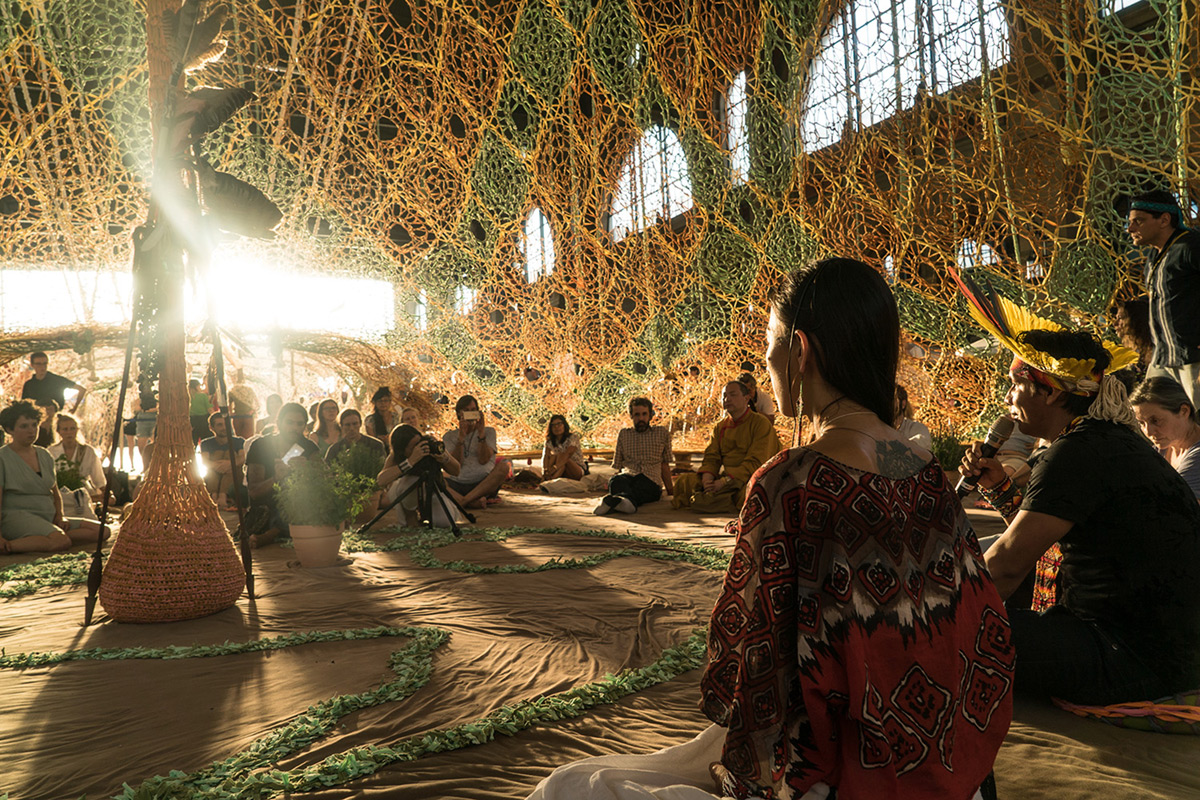 DC: You need to be very careful not to fulfil the Western cravings for the exotic. Artists are exotic creatures. Amerindians are exotic, dressed in feathers and traditional costumes. The biggest challenge was how to work with them and our mutual misunderstandings. At the same time, they wanted to come, and they wanted to engage. I cannot protect them because they are individual, autonomous subjects. The first step was to have very serious people coming together within the framework of a symposium. We have invited critical people who would normally criticise such an endeavour. We mixed the critique within the symposium, not pretending that there is no problem.

MB: This strategy of incorporating the critique into contemporary art sometimes only enables reproduction of the same power structures under the disguise of self-reflection and change.

DC: Yes, of course it does, and that is always a danger. On the other hand, we need to take the critique of such an endeavour seriously and discuss it openly. The alternative would be not to do it at all.

MB: How did the non-Western delegations respond to those concerns?

DC: By telling us that we should stop being so chauvinistic and trying to protect them. Another thing we did was to serve African food, which is eaten by hand.

DC: It is not European, it is not Brazilian, it was kind of a neutral ground.

MB: Isn’t it problematic to take these gestures of eating and trying to copy them and experience the exoticness of eating with your hands?

DC: It was not mentioned as a big deal. It was just happening. Zurich is my natural habitat; this is where I feel comfortable and know how people talk and react. For you, it is different, right? You are a stranger here. I wanted to slightly undermine our comfort. The Assembleia as a setting shared both Western and non-Western concepts. The symposium—now a Western intellectual event—used to be a place where people could drink and sweat together, and thus share ideas and a sense of community in ancient Greece. In Switzerland, we have the traditional Landsgemeinde, in which people meet to vote, and in some villages, it is still in use.  The idea of sitting together to discuss important issues is also very native to the Amerindians.

MB: The Assembleia took place in the Hauptbahnhof [NB: Zurich’s main train station] and was open to the public, but how many people could actually sit inside the tent? Who was invited?

DC: Everybody was invited. There was no VIP list—it was first come first serve. The Hauptbahnhof is accessible, and random people who happen to pass by could also join in. Yet, it is not an unproblematic environment. In front of the main entrance to the Hauptbanhof stands a statue of Alfred Ecsher, a Swiss politician and railway pioneer who was one of the founders of the industrialization in modern Switzerland. Today, it is known that part of his family fortune was made by exploiting slaves in the Caribbean and possibly in Brazil. Switzerland still considers itself clean from a colonial history.

DC: The project tried to be as inclusive as an art project can be, but Switzerland as a country is not. One of the delegates, for example, a critical writer from Uganda, could not get a visa, despite being invited by a major museum.

MB: What was the process of searching for solutions to the possible dangers like? Were you talking about it together? Did you consult other people?

DC: At the beginning, it was the three of us—Neto, Daniela Zyman (the co-curator), and me. And then we opened it up, and everyone who was invited as a delegate had a say about what they would like to contribute.

MB: How has the Assembleia affected you?

DC: It is not unlikely that some of the delegates that we welcomed here in Zurich are in physical danger in Brazil now for the activism they stand for and the rights they try to defend. This is not something I can stay neutral about. I am involved whether I want to be or not.

MB: Where do you see the Assembleia on the spectrum between centre and periphery?

DC: An Austrian curator, a Swiss curator, and a Brazilian artist are doing an art project in an artwork in Zurich, which was supported by a Swiss institution (Fondation Beyeler), having Gaia, the personification of earth as its central motive, and inviting people from Brazil, but also from London and Paris. If the measure of success is being in the world and living in a way that connects you to your surroundings, then the Tukanos are the centre and we are the periphery. If you talk about the distribution of wealth, then Switzerland is very much the centre of the world. When we sat at this beautiful sculpture and Putanny was singing… for a moment, it felt like the centre of the world. 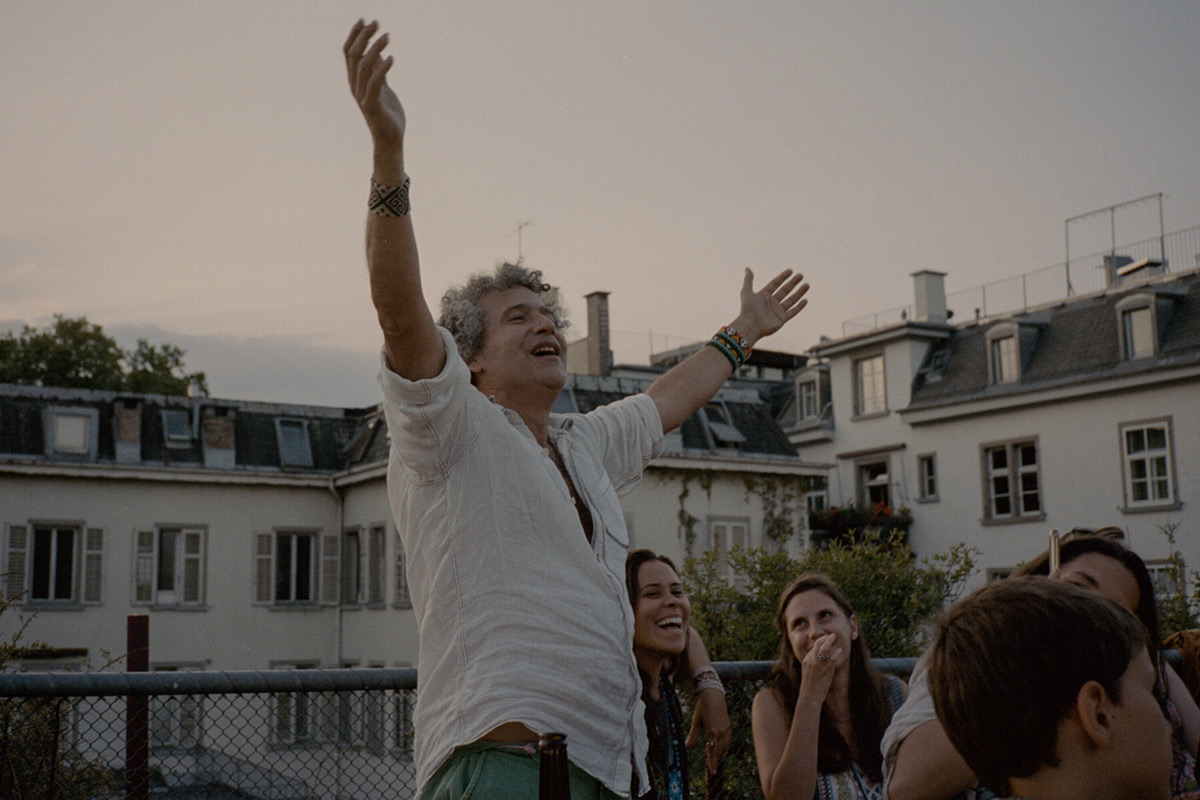 Damian Christinger (b. 1975, Zurich) is an independent curator, publicist, and lecturer specialized in transcultural theory and practice, the Anthropocene, and cultures of food. He studied Asian art history and intercultural studies at the University of Zurich, and his main focus lies in the construction of “the Other” in intercultural relations and art history. He was a guest curator at TBA21 and at Museum Rietberg and has curated shows in various venues.

Maya Bamberger is a MAS Curating student based in Zurich. She completed her BA in History of Art and cognitive science at The Hebrew University in Jerusalem, focussing on the intersections between art and neuroscience. She was the manager of RawArt Gallery, Tel Aviv and an intern at the photography curatorial department at Tel Aviv Museum of Art. Her current research focuses on the art field in Jerusalem.

[3] Cristina Ruiz, “The Road to the Venice Biennale is Paved with Good Intentions,” The Art Newspaper, May 16, 2017, accessed Jan. 9, 2019, https://www.theartnewspaper.com/review/the-road-to-the-venice-biennale-is-paved-with-good-intentions.