An Exercise in the Practice of Affidamento

Over the past few years, I have been searching for collective feminist practices within the history of some interconnected groups and networks with the aim of learning from them and using them as tools with which to develop new ones. One of the groups with which I have spent time, researching their practices, is the Milan Women’s Bookstore co-operative, whose collective research has been widely influential, not only in Italy, but also in a number of European countries.

Perhaps the most beautiful, difficult, and important of the Milan Women’s Bookstore co-operative’s practices is their practice of affidamento. The Bookstore, which was founded in 1975 and which is still in operation today, is the public project of a women’s group, which developed this common project as a way to create a bridge between the separatist women’s group and the public realm. Similarly, affidamento is a practice that facilitates the extension of the radical politics of difference within the group into its way of working together on the bookstore project, but also further afield into existing institutions and power structures.

Affidamento is a term that describes a relationship between two women, where each entrusts herself to the other, so that each can use her talents, competences, and desires to open new political spaces for the other. It is not that the Milan Women’s Bookstore co-operative invented this kind of relationship, but rather they put a name to it. They named a kind of relationship, which now and historically has been indispensible for women to achieve political aims. Indeed in naming it, and practicing it intentionally, they created a radical ethics of difference, where this entrustment to the other is actually an entrustment to her difference—in other words, a radical openness and commitment to another’s irreducible difference, her uniqueness. This relationship is not one of identification—it is not that these two women see themselves in one another—on the contrary, it is through their differences that they desire to not only work together, but also to re-form the self as a uniqueness that comes about through its recognition by another and the affirmation of that uniqueness as sexuate.

Affidamento is a practice of commitment-through-difference in relationships among women. Knowing through doing is particularly important with regard to affidamento, because it is a practice that begins from and takes the shape of those who do it. The importance of empirical and personal knowledge in Italian feminist political practice is present in this structure, using one of its key founding principles as its basis: partire da sè or “starting from oneself.” Thus, in order to understand this theory, one must undertake the practice and invent it for oneself-in-relation. Although affidamento is usually something that takes its own time, often long-term, it is possible to attempt it and to experiment with it, in the time of one meeting. This exercise is a framework that is intended to provide such an opening, and it uses storytelling to do so.

The importance of narrative storytelling in the practices of the Milan Women’s Bookstore co-operative is felt in the story told in their book about two women, Amalia and Emilia.[1] Amalia is sick of her friend always repeating stories about her life, and so she writes Emilia’s life story for her on a few sheets of paper, which Emilia then carries around in her purse afterward and reads incessantly and with great emotion. As Adriana Cavarero writes about this story, “Emilia has lived a life in which her uniqueness has remained partially unexposed due to the lack of a shared scene of co-appearance, the lack of a true political space.”[2] Many of the “socio-symbolic” political practices developed by The Milan Women’s Bookstore co-operative utilize different modes of storytelling. These speech practices are not always the defining feature of these practices, but nevertheless play an important practical role. The story of Amalia and Emilia is a story of affidamento, in which Amalia’s greater competence as a writer gives Emilia access to a sense of self.

I developed the following exercise as an attempt to find a way to both introduce the practice to a group and to foster its growth among members of the group. I devised it for a group that has not yet formed in mind, such as a workshop with participants from different contexts, but a group that has already been established could also do it. It takes about an hour; each part requiring around twenty minutes:

Part One
Meet in a circle. The facilitator begins from her left and gives everyone in the circle a consecutive number, stopping when she is halfway around the circle. Then she begins counting from one again, so that everyone can find the person who has been given the same number. That way, pairs are formed, and the pairing is more likely to join people in the group who are not (yet) closely connected.

These pairs then find a space in the room where they can listen to each other, uninterrupted for ten minutes in the psychoanalytic arrangement, i.e. one lying down, the other sitting next to her head so that they don’t look at each other, and listening to each other with a special kind of attention: keeping an open mind and not categorizing what the other person is saying. Other physical arrangements are fine, as long as there is a disparity in orientation between the positions, and there is no eye contact.

Each tells a story about a relationship she has had with a woman (and if you are not a woman, a story of a relationship between two women you know of) which could possibly be a story of affidamento. It is important that the one listening does not interrupt the one speaking, although she may take notes.

When the first block of ten minutes is up, the facilitator tells those speaking to stop and change positions with their partners. After the next ten-minute block, the facilitator explains the next stage of the exercise.

Part Two
In twenty minutes, write the other person’s story. The facilitator poses some challenges and questions to the group: Think about the way you tell the story—its form and the kind of language you use. From what perspective, in which voice do you write, and why? Do you need to ask your partner questions as you write? Try to think of this story as a gift to the other: what can you write that will help her and the others understand the relationship in a particular way?

Part Three
Gather again as a group in a circle to read a few of these stories. Those in the circle who would like to share the story they have written read them aloud. The facilitator asks for a few minutes of silence, so that everyone in the circle can consider the following: This reading should be done in such a way as to be a kind of gift to your partner (or the women in the story in the case that your partner is not a woman), giving her a coherent sense of her uniqueness-in-relation, and giving her the authority to speak about the relation for herself. In this task, we entrusted one another with intimate stories of relations between women that work through and on disparity rather than sameness. We worked on the important task of storytelling as a way of creating affirmative relations over time and giving others a political space of co-appearance as an act of co-becoming. How can we perform this in the act of reading? 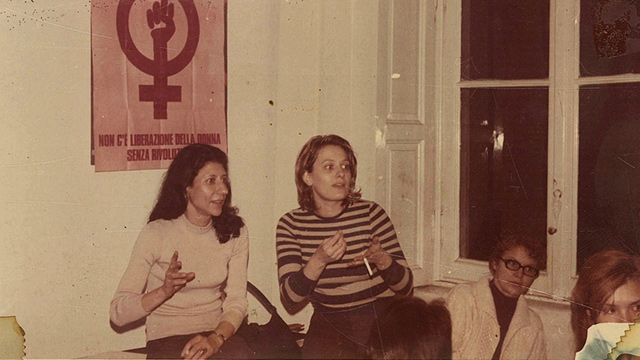 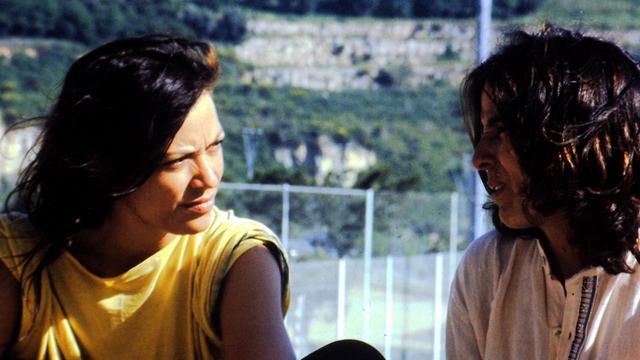 Alex Martinis Roe, For the joy of being together, they didn't have to agree, film still of a photograph courtesy of Ca La Dona archive Barcelona, 2015-2016.

Alex Martinis Roe, It was an unusual way of doing politics, there were friendships, loves, gossip, tears, flowers..., super 8 still transferred to digital, 2014.

Postscript
Having undertaken this exercise with four groups now, it has confirmed to me that engaging in this kind of political practice with strangers is extraordinarily effective. It is astonishing, that ten minutes of open and attentive listening is enough for these stories to be meaningful, not only to the pair who shared the experience, but to everyone. What another, who has opened herself to it, can observe may enter the story as an important insight, as it did many times in my experience, but then much more simply, as a witness, the listener and her written story affirm the importance of that relationship, creating a political space of appearance for it. And although sometimes the stories themselves can be a bit boring, the act of giving this kind of gift is what is important. The stories are gifts of recognition of relationships among women that are not framed by the existing institutions of family, work, and friendship, but rather are accepted on their own terms including modes of relation that exceed these structures and flow between them.

It is also important to dispel the rosy picture that may have arisen as you read the above. This practice is not always easy. Sometimes the greatest gift is a line in the story that goes against our habits of thought, our way of understanding ourselves and our relationships. Listening is an act of kindness, but refusing to repeat or affirm the habits of patriarchy and other oppressive structures in us is an act of love—one that can be difficult to accept.

Although ten minutes is already enough for the practice to begin, our experiences have made it clear that more time is precious—in fact incredible in its effects. A gift of acknowledgement that takes time and takes time into account is the most effective of the relational practices I have witnessed and taken part in. That said, it is so important to keep beginning, now, and in as many possible places at once, and with more and more people.

Alex Martinis Roe is an artist and researcher. She is a former fellow of the Graduate School at the University of the Arts Berlin, and holds a PhD from Monash University, Australia. She is currently completing her project To Become Two: a series of films, workshops, public events and a book, as a social history of the feminist practices that invented the concept of “sexual difference,” and collective experiments with this research through the sub-project Our Future Network. This project was co-commissioned as a series of solo exhibitions by If I Can’t Dance, I Don’t Want To Be Part Of Your Revolution (Amsterdam), Casco – Office for Art, Design and Theory (Utrecht), The Showroom (London) and ar/ge kunst (Bolzano), and has also been exhibited at Badischer Kunstverein (Karlsruhe). Parts of the project have been exhibited at, among others, Art Gallery of New South Wales (Sydney), Australian Centre for Contemporary Art (Melbourne), SlyZmud Gallery (Buenos Aires), Dienstgebäude (Zürich), Yvonne Lambert (Berlin), and Hessel Museum of Art (Annandale on Hudson, NY). She is Head of Sculpture at the Australian National University and co-leads the transversal working group FORMATIONS in Berlin with philosopher Melanie Sehgal.

by Emanuele Guidi and Lorenzo Sandoval

How To Rest Together

by Valentina Desideri and BAR Project

by Céline Condorelli and Manuel Segade

by Emanuele Guidi and Lorenzo Sandoval

Could Curating Be in Time?

An Exercise in the Practice of Affidamento

by Antonia Alampi and Alec Steadman

Undoing the Present: On Labor Conditions, Economic Survival, and Other Questionable Practices of the Art World

A Model of Possible Action. An Unfinished Protocol

Welcome! A Conversation with Sol Calero about Tropical Hospitality, Latin American Legacy, and the Potential of the Exotic

A Former Jail, A Diagram, A Space for Openness: What Is to Be Done? Interview with Justo Pastor Mellado, Chilean Curator and Critic

Spaces of Anticipation. Symposium at EACC in May, 2014