The presentation[1] opened with the fi rst minute of the trailer of Train to Busan, a 2016 summer zombie movie that was a huge hit in Hong Kong[2]. 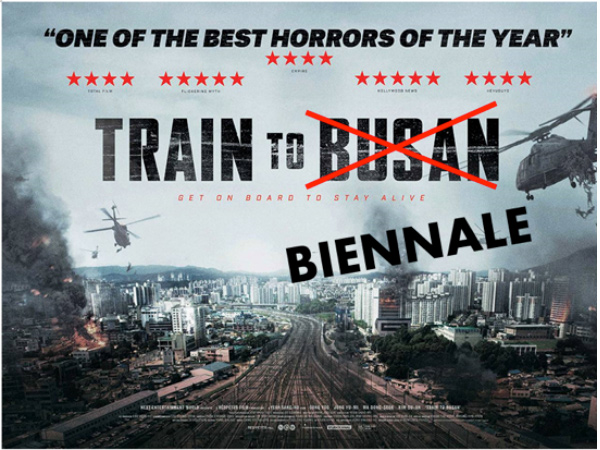 When it comes to the monster or zombie apocalypse in Korea, I could, of course, have played a clip from the 2006 movie The Host, where a monster created by chemicals dumped into the Han River by the US military emerges to wreak havoc in Seoul. But the worst crime one can commit when speaking about Gwangju is to speak about Seoul. A lesser crime would be to speak about Busan. And so, I decided to go with a clip from the more recent, 2016 hit Train to Busan instead.

The scenes of KTX train stations in this clip alone trigger quite a bit of memory—of the numerous hours spent on trains, waiting at or running between stations, painfully reminded that although everything looks East Asian and familiar (including my own face), I cannot read, speak, or understand a single word of it. The three-hour, sometimes four, journey from Seoul to Gwangju is more or less the same length as my flight back to Hong Kong from Seoul, plus the train ride from the airport back home—so there were moments when I looked out of the train window and thought, what a funny thing it is, how transportation collapses and stretches time. Geographical distance is such a farce. What South Korea does well, whether you’re a foreigner or local, is to put you in your right place.

There is also something about the image and metaphor of the train, how it has an uncanny resonance with a large-scale art event like a biennale. A locomotive, plagued with zombies and monsters, it may be accelerating or slowing down. But nevertheless, it is destined for its doomed or transcendent final destination. 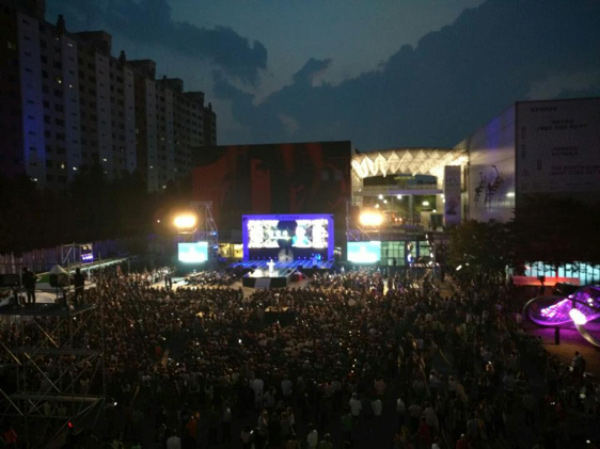 Opening ceremony of 11th Gwangju Biennale, The Eighth Climate (What Does Art Do?) August 201. Photo by Sabih Ahmed. Courtesy of Sabih Ahmed.

The opening, the joy and exuberance of unveiling any exhibition; the crowds, the forums and symposiums and collateral events; the smell of ink on paper fresh off the press; words on the street that “oh, you must go see this work,” “can you believe it, that work is still not installed,” “that projector had broken down,” “that light had stopped working but they fixed it.” The biennale’s entire runtime, the continuous bureaucratic maneuvers and reports. The cigarettes, the food, the booze.“A Viciously Entertaining Ride” indeed. 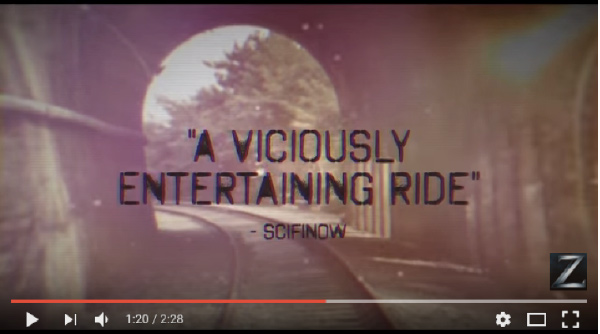 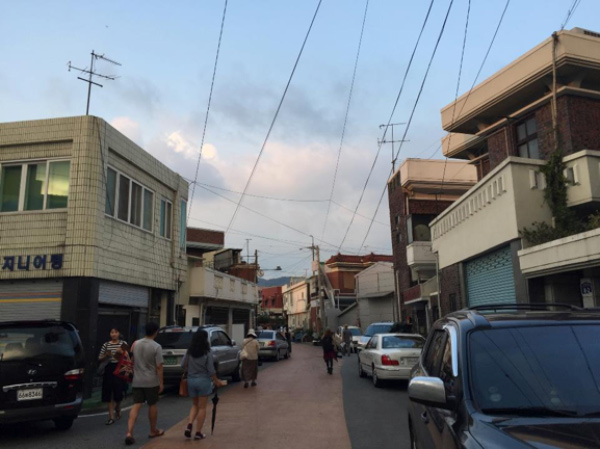 Gwangju at dusk, May 2016. Photo by the author. Courtesy of the author.

Zombies and Monsters
At one point or another during the making of a biennale, everyone becomes zombies. Half alive, half dead, half asleep, and definitely hungry. The desire for one thing or another keeps us going. Or, the desires of the city hosting the biennale keep you awake day and night, toiling, making, destroying, emailing, fundraising, editing. The biennale itself and its supporting structures seemed to have become a monster. Supremely complex to navigate and communicate, often lost in multiple layers of translation, be it structural or visual or linguistic, and sometimes the space literally has pillars in it. This climate coaxes the monsters in us to come out for a stroll. Indeed, it is hard to tell whether we are broiling in the heat of disaster or basking in the light of paradise—we shiver with fear, we boil with anger, we quiver with excitement.

The city stays awake for the event that demands/commands the national and international spotlight once every two years, too. Over the course of the year, as we continuously traveled to Gwangju with artists more or less every month to prepare for the Biennale, we adopted a number of bars and restaurants. We started negotiating with the owners to ask if they would stay open till late for us, and they did. We also adopted some office spaces as our own, in particular, a nook inside the Asia Cultural Centre, the federal government-funded cultural centre that is notoriously unwelcome in Gwangju, a gargantuan site and fixture of competition in both an actual and symbolic sense. We also adopted exhibition spaces in the citizen-run 518 Archives, where the primary documents and oral histories of the 1980 May 18 student uprising—the uprising that inspired the creation of Gwangju Biennale in 1995 as a living memorial of the event—are stored. One must not assume that desires to relate to one another and work together cannot be barred by institutional constraints. The desire to be together is a very powerful tool; like a philosopher’s stone, it can sometimes turn dust into gold.

Drivers and Passengers
A funny thing with trains is that some of them still use drivers, even though they are on tracks. The first thing that comes to mind is the curator as driver. She or he comes up with a vision for the biennale, and brings it into fruition against all odds. [During the course of this ride, groups (if not armies) of crew members and mechanics in the metaphorical and actual sense are formed and deployed, and the train that is the biennale huffs and puffs along. For those sitting in the so-called drivers’ seats, the biennale is often a ride with high stakes. It can be an entry point into a larger circulation and higher visibility both locally and internationally, a platform for testing otherwise physically and/or financially impossible ideas. To curate a biennale is to have an opportunity to make a statement, to direct the art world’s gaze towards a certain direction, to create new possibilities.

The metaphor of curator as driver in this sense is not difficult to imagine. What about that of curator as passenger? One way to see it would be that curators are here for the ride—to fame, to access to large budgets, to a quick download of deep and vast networks. But the thing with trains on tracks is that they are headed in a certain direction no matter what. The destination cannot be changed (unless it goes off the tracks). There comes another part of a biennale-making experience where the event takes over in full speed. The machine is well oiled and fully fueled, and it just speeds to its end. At this point, you step outside of yourself and become a passenger to the event, observing from a mental distance in spite of all that is zooming past you.

My most distinct memory of this passenger experience was not at the opening of the biennale, but rather, at a reading group that was part of the monthly gathering leading up to the biennale. We were reading an essay by Julie Ault, titled “Active Recollection: Archiving Group Material.” It was May 20, 2016, and so the city of Gwangju was painfully aware of the recently passed anniversary of the 518 uprising. The essay was translated into Korean from English, so each participant in the reading group chose to read the text out loud in the language with which they were most comfortable. And so for over two hours we were enveloped in this reading and discussion on expansive notions of histories and archives that trespassed two languages. At that point, no single person was driving, because when a city’s silent awareness of its historicity, presents, and futures takes the driver seat, you sit back, and go for a ride. 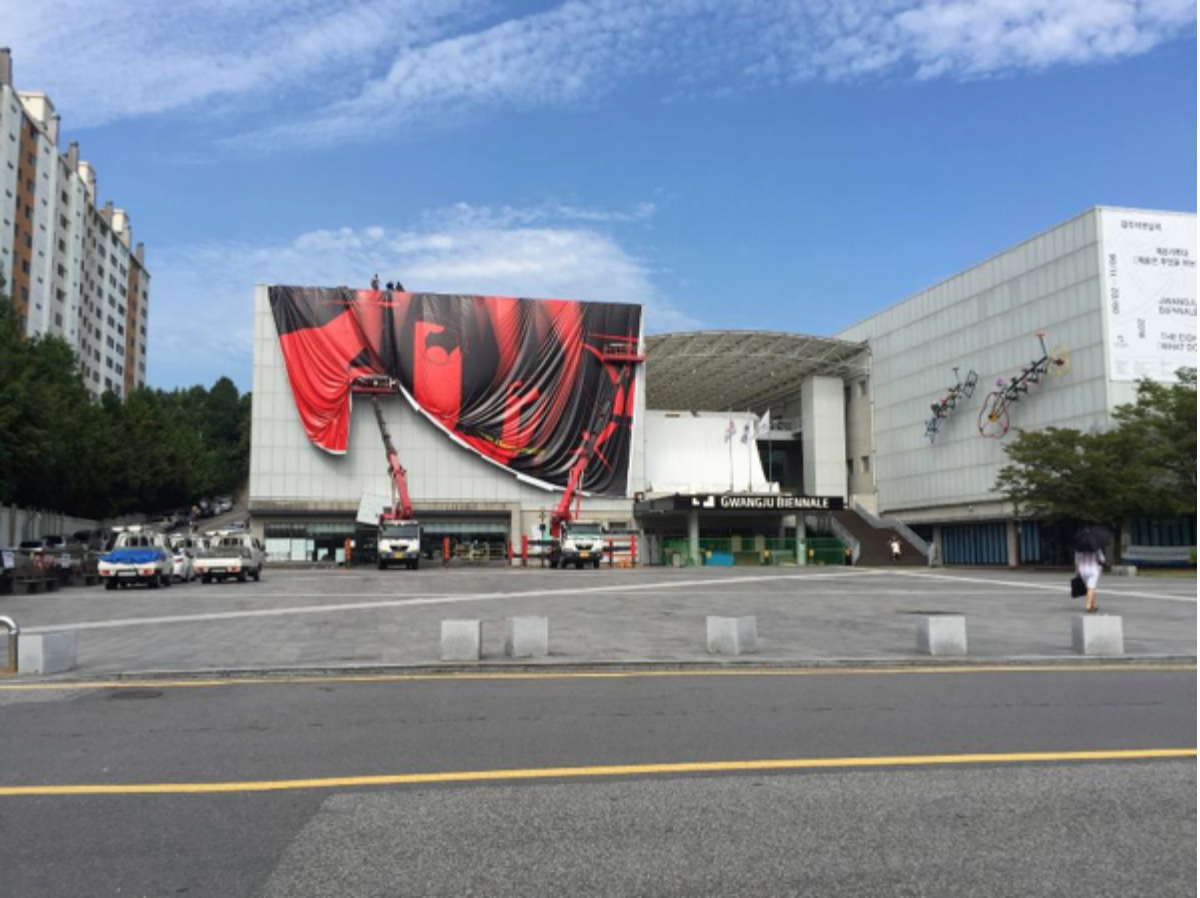 I sometimes wonder, why then do we need drivers at all, when the tracks have already been laid, and the arrival of the event is a mere inevitable fact. And then I thought, maybe not all trains are fully automated. And maybe, as much the role of curators in biennales is to steer it along the tracks, it is also to conjure up the climates that surround it. If the concept of a biennale sparks/starts the engine, the process through which a biennale comes into being, the shared experiences in forms of conversations, exchanges, and small gestures of politics and kindness, are the matter that form such climates. The sense of wonder, the celebration of curiosity, and for myself personally, the reminder of what it is to be human, for better or worse, is what art does at its best, and what a biennale stages at its best.

If the tracks of biennales are veins of desires—of individuals, institutions, even cities—I wonder, what bloods flow through them?

Michelle Wong is a Researcher at Asia Art Archive. Based in Hong Kong, her projects include the Hong Kong Art History Research Project, the Ha Bik Chuen Archive Project, the undergraduate course developed in collaboration with Fine Arts Department, The University of Hong Kong, and London, Asia, a collaborative project with Paul Mellon Centre for Studies in British Art. Wong is part of “Ambitious Alignments: New Histories of Southeast Asian Art,” a research program funded through the Getty Foundation’s Connecting Art Histories initiative. She was also Assistant Curator for the eleventh edition of the Gwangju Biennale, South Korea.

Notes
1 This text was written as a spoken presentation for “The Singapore Biennale 2016 Symposium: Why Biennale At All?” that took place on January 21-22, 2017, at the Gallery Theatre, National Museum of Singapore. The symposium was convened by Dr Hoe Su Fern, Assistant Professor of Arts and Culture Management from the Singapore Management University School of Social Sciences, in partnership with the Singapore Art Museum. This text was presented as part of the session “Behind the Scenes: The Making of Biennales” on January 21, 2017. I participated in this panel as an Assistant Curator of the 11th edition of Gwangju Biennale, 2016 (GB11). Titled The Eight Climate (What Does Art Do?), GB11 was artistically directed by Maria Lind, with Curator Binna Choi, and Assistant Curators Margarida Mendes, Azar Mahmoudian, and myself. GB11 included not only exhibition and publication components, but also a ten-month-long program comprised of reading groups held in Gwangju, as well as lectures at universities and artist-led school initiatives in Gwangju and Seoul. Other speakers on the panel included Alia Swastika, Director, Art Jogja Biennale, Jitish Kallat, artist, curator, and Artistic Director, Kochi-Muziris Biennale 2014, and Monica Narula, Raqs Media Collective, Chief Curators of 11th Shanghai Biennale 2016. I would like to thank the organisers of the Singapore Biennale 2016 Symposium for the initial invitation, which prompted the writing of this text. I would like to thank the editors of OnCurating for including this text as part of their publication; I am also grateful to the Symposium’s organisers for agreeing to publish this piece as we prepare for an elaborated version of this text that will be part of the Symposium’s publication.