Decolonization, which sets out to change the order of the world, is, obviously, a program of complete disorder. But it cannot come as a result of magical practices, nor of a natural shock, nor of a friendly understanding.
Franz Fanon, The Wretched of the Earth, 1963, p. 36

Decolonisation and the Scopic Regime
Sparked around the issue of academic and financial exclusion of black students, and continued existence of colonial and apartheid memorial, statues and other representational symbols and signia at the University of Cape Town, the protest and eventual removal of the Rhodes statue was symbolic for the impending and inevitable fall of white supremacy and white privilege at the university, and by implication in the wider society in South Africa.

The debates and urgencies that encompassed and capitulated the height if this period have been organised under the umbrella term of “decolonisation” as a stand in term for addressing dissatisfaction with processes and systems that are under-transformed post-apartheid. This use of the term follows on the trend, noted with growing apprehension by Eve Tuck and Wayne Yang (2012: 2), of the “ease with which the language of decolonization has been superficially adopted into education and other social sciences, supplanting prior ways of talking about social justice, critical methodologies, or approaches which decenter settler perspectives”[1].

Given that the initial protest were against ‘art and heritage objects’ in the university art collection, beside the Cecil Rhodes statue, many of which were artworks produced by alumni and students of the Michaelis School of Art. There was an assumption and hopes that the ‘moment’ would forced an ‘accelerated reflection’ on not only the university, but the art school, its programs and orientation. And optimistically perhaps, the ‘moment’ would generate specific forms of scepticism and epistemic attitudes out of which critical questions could arise and the limitations of the schools biased epistemic interests and attendant blind spots could be deliberated.

Decolonisation and the Scopic Regime[2] was an attempt to critically engage an art school in the midst of an embattled university context, and garner some perspective, both in terms of what it means to heed the call to decolonise and how do we recognise it when its happening. The project functioned somewhere between the limits and potential of employing the term ‘decolonisation’ and actually engaging with decolonial methodologies and theory in the face of “institutional arrangements, where historically marginalised groups have been expected in ordered to be accepted, to assimilate into the discomforting institutional cultures”[3]. Serving as an investigation of the processes through which to address and scrutinize our cultural and academic institutions and how they continue to function, the multi-pronged project was a short atlas of the plurality of creative resistance tactics, direct action, counter-information, and biological resistance to the academy, its syllabii and firewalls.

Through the work of 10 South African artists the premise of the exhibition condensed into speculative proposition the supposition that there are recent works of Africana contemporary that art make Looking After Freedom possible. Ways of looking after freedom must be constructed rather than discovered and vivid imagination may be a start to disentangled, decolonized, and emancipated looking. Looking after freedom is on going and unfinished attempts to establish new histories, logics, and points of view. “Looking after freedom” as activity escapes the grasp of art criticism and art history—it means caring enough to invent more humanly workable visual, material, and conceptual resources. The artworks become a present delivered to a future.

The and was a filmic exhibition that invited reflection on how different public contexts have shaped, or sought to shape, notions of ‘African art’ historically and around the world. They further give pause to consider what cultural practice in the present and future might learn from these histories, or how we might challenge them. Particular artistic, cultural, anthropological, documentary and museological practices are brought to the fore – with colonialism, decolonization, postcolonialism and globalization as a neo-colonising force.

The symposium explored ideas around the role of the creative arts in provoking change, the imperative to decolonize the university, and the dialectic between the settled nature of academic curricula and the spontaneity of transformation. Thematically the symposium was concerned with artistic and creative research and how this comes to be represented in museums, art schools and art institutions around the world. Ideas pertaining to history and heritage, language, hybridity, creative economies and curricula are explored and the Symposium facilitates a critical platform for probing the potential of the university curriculum to respond to the fluidity of transformation. 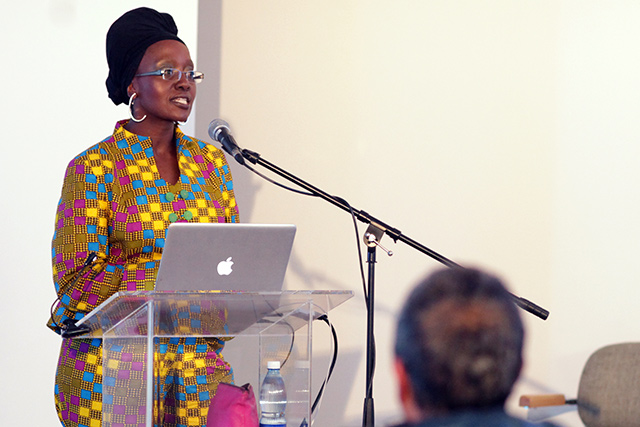 These multiple attempts/ approaches and the varying modes, with multiple collaborators, all of whom I am very appreciative off, were an effort to surmount blind spots, and critically revise received theories and ideas and search for possibilities generated towards the ends of epistemic justice. What was very clear was in order for the alternative epistemic framework to be useful and to work varyingly; it has to operate differently than it was being interpreted in the university, in the concrete ways in which its knowledge is produced and who produces it. In that sense, decolonizing knowledge necessitates “shifting the geography of reason” vis a vis Lewis Gordon, which means opening reason beyond provincial horizons, as well as producing knowledge beyond strict disciplinary impositions.

The resurging call in South Africa presently highlights that decolonization as a political, epistemological and economic liberatory project has remained an unfinished business, giving way to coloniality. Envoking Audre Lorde, in that the master tools will never dismantle the masters house and the idea that they could is what produces a seemingly ineascapable coloniality. The call to decolonise the university is a clarion cry for universities in an African context to do away with coloniality and be more relevant to their geographic situation instead of being apolitical, a-contextual, outward facing, and structurally racist monoliths at the edge of society. This of course is complicated in a neoliberal capitalist environment and with the current orientation of the univeristy, where in order to be internationally relevant the cost of participation is its adherence to the questions, concepts, and standards of a singular region of the world, a region that has been characterized by both imperialism/colonizing and ignoring other regions.

Since the decolonial discourse cannot be restricted to binary power relations, its scopic regime must not only expand, but decipher the epistemological and methodological grounds of coloniality, as well as its embedment within the modernity project and its mutating abilities. Facing these mutations and complexities of undertaking a 'decolonized production process', if it be currently possible at all, will progressively happen by introspection, and participation in the processes of “addressing” artists and traditions that previously may not have been “adequately” addressed, or whose production has been given skewed readings, through strategies that take ownership of systems of knowledge production through visual art practices, and systems of diffusion and commercialisation.

Nkule Mabaso, b. 1988, graduated with a Fine Arts degree from the University of Cape Town (2011) and received a Masters in Curating at the Postgraduate Programme in Curating ZHdK, Zürich (2014). She has worked as Assistant Editor of the journal OnCurating.org and founded the Newcastle Creative Network in Kwazulu Natal. As an artist, she has shown work in Denmark, Switzerland, South Africa, Germany, and Zimbabwe. She has curated shows and organised public talks in Switzerland, Malawi, Tanzania, and South Africa. Currently she works as a curator of the Michaelis Galleries at the University of Cape Town. She is a PHD Candidate at Rhodes University as part of the research team SARChI Chair ‹Geopolitics and the Arts of Africa›. Her research focuses on the Kwazulu Natal interior and calls for the development of context specific policy and that will provide the strategies for the mechanisation of the economic potential of culture in the context of small cities and large towns in South Africa. Specifically the research aims to produce recommendations for the creation of a well-structured municipal cultural policy for the small city of Newcastle that will be a resource that can generate new localised possibilities for the support of local cultural projects at municipal level.

2 Documentation of the project will be avail on www.decolonisingartinstitutions.co.za