In the beginning of 2015, the “RhodesMustFall” movement ignited a ripple effect that will continue to resonate in the unrest of institutions of higher learning across South Africa for some time. The “RhodesMustFall” movement began at the University of Cape Town when student activist Chumani Maxwele threw a bucket of excrement at the Cecil John Rhodes statue. This performative act spiralled into a movement that saw a generation of young South Africans challenging monuments and structures that are a representation of the past. While the protests were primarily in response to the lack of transformation within institutional structures that continue to ignore and neglect the “real” lived experiences of marginalised people—who in South Africa make up a majority of black African people—it is also important to point out that the “RhodesMustFall” movement was also a response to a continued monumental and symbolic presence of reminders of a painful past that South Africa has in many ways not yet addressed. 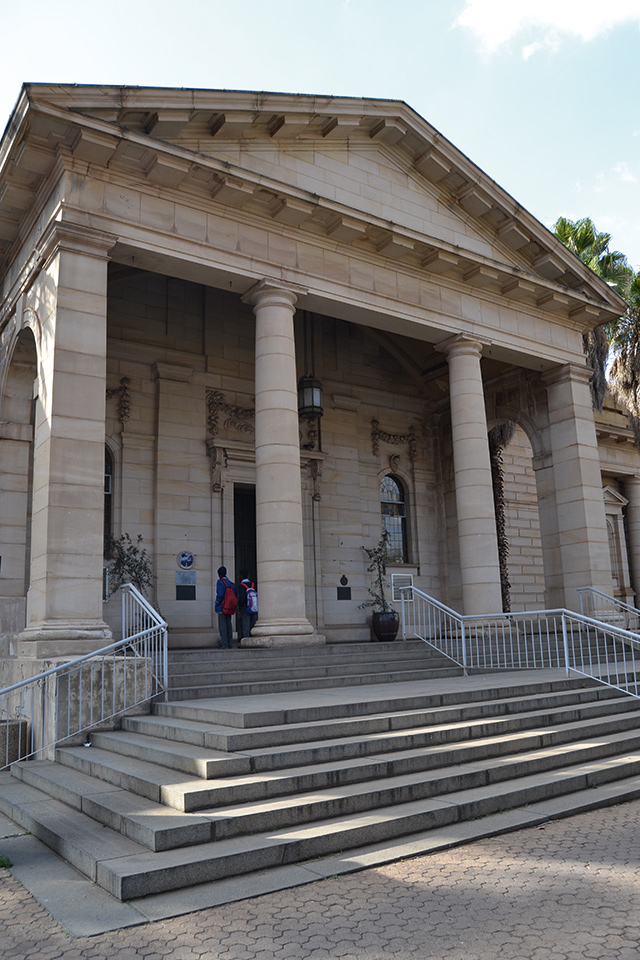 Johannesburg Art Gallery, 2017. Photographed by: Same Mdluli. Courtesy of the City of Johannesburg.

These reminders often find their way into art institutions such as museums and galleries, public spaces, all of which carry and house the institutional memory of monuments to colonialism and apartheid. It would therefore be inattentive not to begin by recalling some of Annie Coombes’ reflections in History After Apartheid: Visual Culture and Public Memory in a Democratic South Africa precisely because of the inferences it makes in pointing out that “one of the most startling periods of political and social transformation in recent history during which the South African debates on history and heritage, on ‘truth’ and lies, and on memory and make-believe demonstrated the health and vitality of a political culture of critique and countercritique.”[1] The “RhodesMustFall” movement presented a similar moment, which in this article I posit has implicated an entire range of institutional factors—particularly in the arts and culture and heritage sectors.

At the core of the students’ protests is how they exposed an uneasy discourse around the myths of the “rainbow nation” and the idea that “rainbow-ism” died with Nelson Mandela and the ideals his presidential administration had ushered into governance. Although the students’ protests are in this instance setting the context for this argument, it also extends beyond the provocation posited by the students and rather positions entities such as galleries and museums as instrumental to outlining this narrative, and in so doing, interrogates whether the kinds of engagements with such colonial legacies can begin to imagine a decolonized history of South African art and art history.

Museums and galleries have indeed featured prominently in the shaping of South Africa’s art historical narrative. In addition to furthering the colonial and apartheid project, museums and galleries also became sanctuaries from which nationalist ideals were cemented through the types of exhibitions and artists that were shown. With the political shift following the democratic elections of 1994 came the “post-apartheid” era, which demanded the visual art world in South Africa re-evaluate its values on how it would assimilate into the new political dispensation. This did not necessarily mean that museums and galleries where required to change their institutional structures to match that of the new political order, but rather that they were required to readjust their programming to be a more inclusive definition of art, culture, and heritage.

Overall, art, culture, and heritage occupy a precarious place in South Africa’s socio-political conscious because they only ever become significant in historical moments such as the cultural boycott of the 1980s and increasingly become an obscured understanding associated with popular-ism and contradictions about self and artistic expression. One also needs to refer to how the idea of art, culture, and heritage was constituted in instances like the delivery of retired constitutional court judge Albie Sach’s infamous address, Preparing Ourselves for Freedom: Culture and the ANC Constitutional Guidelines. It becomes a significant document because Sach subsequently became instrumental in the establishment of the Constitutional Court art collection, which now sees hundreds of annual international visitors as a heritage site. There were many criticisms of the article when it was initially published, and rightfully so, because, in addition to being instructive and manifesto-like, it also reflected on an imagined role of art, culture, and heritage in a “liberated” South Africa.

The effects of Sach’s address are more nuanced in terms of its influential role on a particular understanding of visual culture and artistic expression, one that posits the difficult questioning of the relationship between the culturally dominant and culturally dominated. Decolonizing art institutions in South Africa therefore requires a level of reservation and furthermore an interrogation of who gets to determine the terms under which this debate takes place. An example of this debate can be seen in the idea of the township and “township art” that was coined as a label for particular kinds of works from the 1980s. Of all the stylistic modes of expression and schools of creative thought, from a historical perspective prior to 1994, the art centres in the townships are a common factor in the country’s mental geography, preceding current global trends, signified through post-structural identity commonly referred to as Post-Modernism. However, this aspect of the cultural development of the moral geography of Township life in South Africa in context of an economic survival is rarely linked to the industrial development that sought to single out the country from the rest of the African continent for the sake of mineral wealth and fertile farmlands. This is essentially how informal human settlements were established. Township existence is therefore consistent with numerous new forms of social expressions borne of a common yet separate struggle, and was incited by the need to survive in a hostile terrain. Art produced in this context is thus more than a stylistic art genre typified by sentimental scenes glamorizing poverty, but rather is in terms of cultural existence the archetype of a South African phase and language more unique to this part of the continent and prevalent to the global development resultant of rapid industrialization of the world.

This is but one example, but in highlighting its meaning in the making of the social and cultural fabric of current cultural and artistic landscape it starts to generate a kind of scholarship and better understanding of art and culture within a geographical common expression that informs a more coherent national identity. One may think that in the “Post-Apartheid” era a more coherent narrative of South African art has emerged within South African institutions of learning. In many ways they have, and in many ways they have not, because the government is still dealing with problems around transitional issues—be they ideological, regarding funding, and/or procedural—but this absence points to a larger deficiency in terms of a lack of participation on the part of the arts community (which consists mainly of a Eurocentric perception towards art) in building a more inclusive and critical voice towards shaping matters of national concern.

There seems to be a disjuncture in institutions like the Johannesburg Art Gallery (JAG), Wits Art Museum (WAM), and Hector Petersen Museum (HPM), for example, and the ways in which they form part of the social and cultural fabric of what formulates South Africa’s artistic and cultural national identity. Such a disjuncture can also be traced back to the “rainbow-ism” connotation that sought to advocate for the arts and culture through the idea of “diversity” and its inclusivity of multiplicity and fluidity for creating a new institutional lens from which to allow a variety of voices and approaches to be explored. However, in her essay On Being Included, Sarah Ahmed speaks of “diversity as a form of public relations.”[2] Ahmed’s reading of the creation of “diversity” is that it is concocted as a political solution, one that can participate in making those who speak about racism the cause of the problem. The socio-political framework of South Africa is also such that terms like “diversity” and “multiculturalism” have the potential to exclude and alienate those whose realities do not match or fit neatly into the mould of such terminologies and their meanings. In the context of the curatorial space, they (terminologies and their meanings) legitimise their authority as the final arbiters through a set of conditions. Ultimately, this can be traced through a trajectory of history and the history of the museum, and gallery settings that encourage a particular kind of public engagement with the arts, culture, and heritage.

Museums and gallery spaces currently sit precariously as markers as well as makers of history. On the one hand, as markers of history they have the tendency to literally edit out certain narratives, making museums and galleries implicit in the processes of erasure. At the same time, this process of editing out has also allowed for the omissions and inaccuracies of representation to be highlighted. But on the other hand, museums and gallery spaces can be considered as makers of cultural history depending on the kind of public engagement they encourage. The process of decolonization as note by Khwezi Gule, is thus not just about a change of guard nor is it an optional extra. It is the imperative of our time and we have to admit that museums and other art institutions no longer have the authorial voice. By confronting this, it is hoped that such a discussion will offer a means to raise, probe, and address some of the incongruities and contradictions of celebrating such institutions that up until today continue to harbour colonial ghosts of the past.

Same Mdluli is an artist, art historian, and writer living in Johannesburg. She holds a PhD in History of Art, MA in Arts and Culture Management from the University of the Witwatersrand and a B-Tech degree in Fine Arts from the University of Johannesburg. She has worked as an administrator at the Goodman Gallery and projects in both Cape Town and Johannesburg and taught art at various school levels. She has participated in various exhibitions, conferences locally and internationally and won some awards. She has also participated in a number of international residencies including being invited as a Junior Research Scholar at the Getty Research Institute in Los Angeles and a participant at the Diversitas Summer School in Oldenburg, Germany. This was followed by an invitation as guest researcher at the Institut National d’histoire de l’art (INHA) in Paris for the ‘Culture Profession’ programme under the department of Art and Globalisation. Her research interests are in contemporary African Art, Black Expressive Modes and Aesthetics as well as the conversations between Jazz and Visual Art. She currently serves as council member for the National Arts Council, is a member of the Black Mark: Critical Creative Thought collective and a sessional lecturer in the divisions of Fine Arts and History of Art at Wits University.