Try coming to Cape Town with an interest in contemporary, critical, and political creative practice—and see how long you can go before hearing the word ‘Chimurenga’. The Shona word for struggle, resistance, and revolution has a few more meanings in its South African context. Based in a small and yellow office on the central Long Street, Chimurenga is an institution for local pan-African cultural production—a quarterly publication, an online radio station, a place for musical happenings and art exhibitions. For a local young, gifted and black crowd, it stands as a synonym for cool.

At first it sounded to me like Cheburashka, an iconic animated monkey character from classic Soviet children’s films. When I researched about Chimurenga—after encountering the word enough times in various conversations with artists and writers—I got fascinated and stuck on the list of contributors and their bios on the Chimurenga website. It was a directory of your wishful drinking buddies—an exciting group of cool people. How did they all come together to this magnet called Chimurenga? How do new names keep on adding to the list during more than 15 years of existence?

Judging by their offices, and by the non-existent cultural economy of Cape Town, they are definitely not rich enough to attract their contributors with money. It must be the magic motive of collaboration which attracts Haitian artists, Chilean novelists, Namibian historians and dozens of philosophers, activists, researchers, and poets to invest their time and skills into this project. The spine of it all is answering the name Ntone Edjabe, and sitting on his ocean-view balcony a couple kilometers from the yellow office, he shares a few thoughts on the philosophy and practice of the collaborative magic spell.

“Speaking about contributors, even though people don’t come to us for money we do insist on paying a fee for every contribution. There is a long history of exploitation of the ‘labour of love’ of creative work. It is essentially how many independent, non-commercial projects survive, but it can quickly become exploitative, especially in a country where the hard and soft labour of black people is often taken for granted. We also insist in paying for submissions to try to neutralise the existing power dynamics in the production of knowledge: we don’t want to become the activist terrain of professional researchers and academics, essentially the class of high-profile artists and intellectuals who can afford to contribute ‘for free’. It’s important to continually source work from non-professional sectors, and to make neoliberal concepts like ‘exposure’ irrelevant. The elitist art-system looks down upon gigs, even though gigs are what we make a living from. Particularly when it comes to black people, we are always expected to be creating work for some higher purpose than making ends meet. I don’t care for such bullshit. However, I care for relationships. I like to think that I work with friends—slowly and over a longue durée. We follow each other’s trajectories and develop affinities. That’s how Chimurenga was born—friends came together and an editorial group developed organically from this. People people, like Facebook. My work has been mainly to nurture this organic process. Normally in preparation for an issue, I would circulate an essay, a sort of discussion paper on a theme of interest, among readers and contributors—for instance for the curriculum issue of 2010, the piece explored the question: ‘What of the curriculum was developed by people who left school so they could breathe?’ And the responses to this query formed the outline of the issue we ended up publishing. People might also not be interested. You either touch a nerve, or not. The motives of our contributors vary, and it comes down to the personal level. It’s like the sign at the entrance of the notorious ‘House of Truth’ of the Drum magazine writer Can Temba in 1950s Sophiatown: ‘You won’t find your place here, you will come in and make a place for yourself’.”

2. Taking the enemy to lab.

“I’m intrigued by the word ‘collaboration’. In the context of conflicts and wars, this word comes with negative connotations—a collaborator is the one working with the enemy, in other words, a traitor. In contemporary creative production, it means an ally, and refers to cooperation. The term was turned inside-out. Today in art circles, name-dropping collaborators adds to one’s value. The etymology of the word refers to co-labour, working together, but it also brings to mind a laboratory. Working together in a laboratory. I like this shift, from yourself versus an enemy, to a collective experiment that produces something new. That is a different idea of partnership, because it recognises that you can work with an adversary.”

3. If one party is desperate, it is not a collaboration.

“We simultaneously work with and contest the power of international and national cultural agencies like the Goethe Institute, Pro-Helvetia, the Department of Arts and Culture, or University of Cape Town. They all seem trapped in a logic of development when engaging with cultural producers on the continent—essentially their mission to help us be more like them, while also extracting resources. Whether it comes with bread, a gun, or the bible, it’s the same old colonial mission. If one party is desperate, it is not a collaboration. It means the relationship is fundamentally unequal. One of our responses is to always bite the hand that offers to feed us. We enter such relationships very aggressively and hopefully find middle ground from there. Institutional support is not something that we expect. Rather than filling seasonal application forms, we try to find ways to generate resources from our own work. This is the reason we are working outside the paradigm of ‘projects’. Projects always seem tied to timelines and budgets of funding institutions. Once we shifted our work from, say, a once-off publication or festival, to ongoing activities, i.e. things we want to do every day—it became almost impossible to speak with funders. I am also suspicious about the lack of reflexiveness in this rhetoric of ‘projects’. When one is raising funds for a project, they have to sell it like the most original thing in the world—and sometimes they start to believe their own hype. You will struggle to find artists who disclose that their project is simply to pay the rent and feed themselves.”

4. The valuable aesthetics of together.

“My default position is to work as part of a group. But I also believe all creative work is inherently collaborative—one always creates with other people, even when these people are only on their mind. I prefer to make this process explicit in my work. The sole-creator notion is very foreign to me, whether in writing or music, the channels I am most familiar with. Fela and Miles, the musicians who had the biggest impact in my world, seemed to approach creative work from this group perspective. It is no coincidence that none of them never performed solo—or released a one-person album—even though they were acknowledged as masters of their instruments. I think music, certainly in the jazz aesthetic, has a greater readiness to embrace the collaborative aspect of the creative process. We also seek to realise this through our publishing work; newspapers, like jazz bands, are perfect instruments of collaboration. But I also think there’s an aspect of collaboration that can be fetishized—one sees it in the art world today, this tendency to present collaboratively produced work as different. Worse, this fetishization of collectives! I often take issue with the over-emphasizing of the collectivism of Chimurenga—yes, we do work as a group, but our work isn’t merely dedicated to working as a group. I have heard people refer to collectives like Gugulective or Burning Museum with misty eyes, but they couldn’t name a single one of their works. This is ridiculous. I think group work can be an ethics, an aesthetics even, but it also almost always a strategy—to do something one might not be able to realise as fully otherwise.”

5. Ambition and speed in times of capitalism.

“The slower pace of Cape Town—ironically the absence of fluidity in this city forces people to work together. There are so few spaces for black people working here that we huddle together all the time. There is a sense of solidarity (and its flipside, back-biting) that is unusual in cities of this size. I experience this every day, working from the Pan African Market which is a co-operative of traders. I experience it in the many spaces of freedom and invention that come and go—music venues, cultural centres, as well as itinerant interventions. Even in people’s homes. Most of these spaces function outside big-money systems—usually they are free to access. In the deeply unequal and divided structure of the city, building community and an aesthetics of conviviality become necessities. Mostly, we collaborate because we need to—as a way to stay human, to feel beautiful. Not merely because it is the hip thing to do. We collaborate because we don’t have institutionalized support—and we become the infrastructure on and from which our visions can be realised. Do you see collaboration on new roads or building hospitals? You see it in stokvels, systems that require mutual trust and commitment. Or in tangible co-productions, like parenting, the famous village that it takes…no one gets name credit in those circumstances. We are in times of hyper-individualism, but simultaneously there is interdependence—to work with other people in order to do bigger things. Nothing is made by one person.” 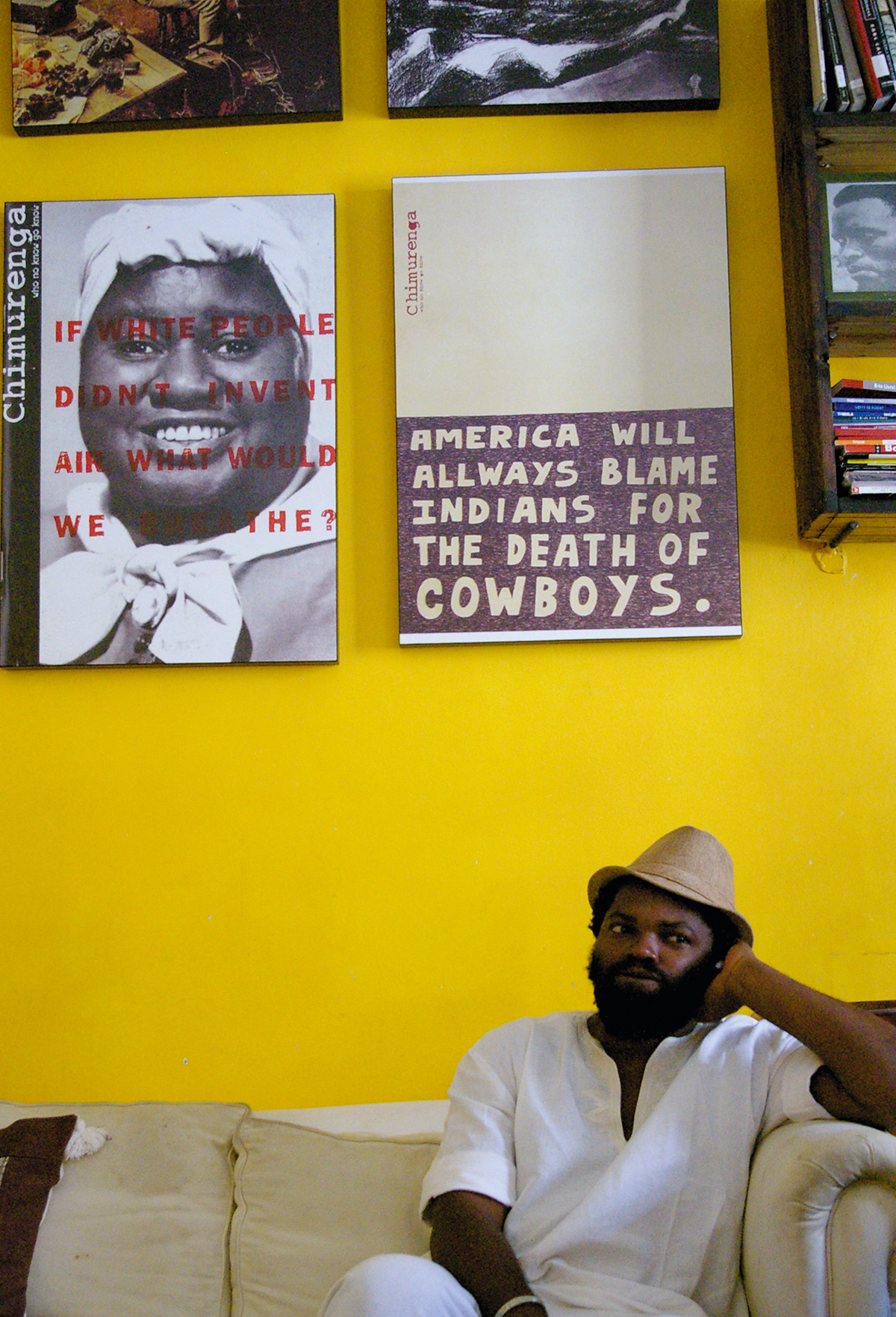 Ntone Edjabe is a journalist and DJ based in Cape Town. He is the founder and Editor-in-Chief of Chimurenga, a platform for editorial and curatorial activities. He also founded the Pan African Space Station (PASS), an internet-based music project. He is co-editor of African Cities Reader, a biennial publication in collaboration with the University of Cape Town. Edjabe has collaborated with numerous radio stations and publications, including Bush Radio 89.5, Politique Africaine, L'Autre Afrique and more.

Chimurenga is a project-based mutable object, a print magazine, a workspace, and platform for editorial and curatorial activities. Chimurenga initiatives include: Chimurenga Chronic a pan-African gazette that that documents the way African societies invent themselves; African Cities Reader a bi-annual compendium of writing and art from multiple genres, forms of representation and points of view which embodies diversity of emergent urbanisms across Africa; Chimurenga Library, an online archive of black periodicals and an exhibition research method, and Pan African Space Station a musical platform on the internet and in venues across the continent.

Valeria Geselev is a curator and journalist who originates from Soviet Ukraine and Israel. Since 2012, she has been based in Cape Town and conducts passionate research into public and socially engaged arts. She is a graduate of the UCT Curatorship Honours programme. Her practice included curating The OBS Academy of Inspiration (a 13-week house-theatre), pop-up exhibitions in public spaces and the South African tour of Halfbread Technique performance lecture introducing post-capitalism with dance. In 2013, she founded Yalla Shoola Curatorial Practice. Her current projects include Social Engineering for Beginners (a travelling lecture introducing public art to high-school learners), White Curtains (site-specific intervention in Sea Point, Cape Town), and Harare Academy of Inspiration in Khayelitsha (as part of Power of Place project by UCT African Cities Centre). Blog:  yallashoola.tumblr.com

In this Context: Collaborations & Biennials

For Whom Are Biennials Organised?

Counting On Your Collective Silence

Marcus Neustetter of On Air on Collectivism and Curating

Justin Davy of the Burning Museum