SC: Altes Finanzamt is a collective whose members have different backgrounds, origins, and artistic practises. In your space you host exhibitions, performances, concerts, readings, dinners, film screenings, debates, and many other innovative and unique formats of events. Considering this whole diverse lot that your space and collective represent, are there any aspects and synergies that you as a group particularly aim to explore?

AF: I think that the diversity in the programme is one of the stronger aspects of AF as a project space. It represents a different kind of challenge, since the audience never fully knows what to expect. You could walk into an installation on a Tuesday and come back to find a musician manipulating electronics for her noise performance one week later. So there is also a big shift in the audience, depending on what’s on. In the beginning you could say that there were two nuclei in the collective—Piso, a visual art collective, which had another short-lived space, Matador Kantine, and teamed up with a group of friends, who knew them and had the same vision of opening a space in Berlin, with an interest in film, music, and performances. I came into the mix shortly thereafter as the only non-Iberian person in the collective at the time, wanting to focus mostly on readings. Since then, some people have left and new ones have joined, blurring the focus even more and making AF more international. To me (and I can only speak for myself when it comes to AF), one of the most interesting things about the work as a very loose-knit collective has been the decision-making process. We have somehow managed to operate on a consensus basis, despite the varied interest of the members and their objectives. I guess one could say that this is something we explore collectively, but apart from that, members have complete freedom in the programming and the usage of the space, with due respect to the others. As I recall there was a bigger tendency to present our future ideas for events in the monthly meetings, where, theoretically, anyone could veto the plans, but it’s always been very free and left to each member to decide. Of course, we have had heavier discussions at times and aesthetic differences between people who don’t necessarily share a large common ground in their own creative output, but we’ve always been able to work around it.

SC: Do you think that your collective has managed to also create a community—not only with the founding members but also your audience— since the opening of the space and formation of the group? If yes, how?

AF: The collective has grown tentacles in the form of a very varied audience and therefore spawned collaborations between people who might otherwise not have worked together, or even met for that matter. So yes, one of the best things has been this inclusion of the audience, people who bring ideas and proposals of their own. All of the members who joined after the space was founded, myself included, have somehow come from this pool.

SC: Speaking about the space and location, indeed your space can be considered the twelfth member of your collective, if not the most important one and its very core. Do you think that your collective would have the same energy if, for some reason or another, you needed to leave the space?

AF: The space is important, although it’s hard to see what is of sentimental value and what would be replaceable. I think we’ve managed to get a lot out of the space we have, but others would have found different ways, and I’m also sure this collective could have thrived in a different one. At one point, when some of the founding members were leaving Berlin, and therefore the collective, we contemplated shutting it down. However, with the city’s increasing rents and the ongoing gentrification, those of us who stayed behind and wanted to continue would not have had an easy time finding a new venue. Our landlords have also been supportive of our work and showed flexibility beyond the norm, even though we’ve had the usual problems of being a gathering point in a residential area.

SC: Which one is/are the event(s) that according to you have been the most significant for Altes Finanzamt so far?

AF: I’m sure no two members would answer this question in the same way. I’ve seen many amazing works come together in the space, but somehow the talks afterwards with interesting people and ensuing friendships is what will prevail in my otherwise unstable memory. Those talks tend to overlap with the events, which is definitely the case with the Philosophical Football and Das Poesiebüro, for example. In a desperate attempt to give readers a more specific answer, I glanced at a long list of artists, and to name a few (too few) who left a particular mark on me, I would mention the music of HHY & the Macumbas and Jealousy Party, performances by Flocks and Shoals, the exhibitions The Springs of the Flood by founding members Mariana Caló and Francisco Queimadela and Field Studies by Christopher Kline and Sol Calero, as well as readings by Cia Rinne and Bjarte Alvestad.

SC:  How has Altes Finanzamt managed to influence and engage the art scene and other off spaces in Neukölln? How has it changed since 2010, with the opening of the space?

AF: I don’t know, really. One of the great things about Berlin, including Neukölln, is that there are so many people doing their own thing. The city is full of small spaces, bars, associations, concert venues, and galleries catering to a specific scene with eclectic programmes. AF has collaborated with many, mostly through the member’s own connections and interests. A lot has changed since we started, as there are always new places popping up and others being replaced, usually by commercial activity, as a result of rocketing rents.

SC: In 2013, you won a prize and recognition from the City of Berlin for independent spaces. How did this change the activity of Altes Finanzamt.

AF: It didn’t change much. The money came in very handy since we could pay off debts that had accumulated despite our best efforts. Some parts of the space and the equipment were in a sad state, so we used most of the money on infrastructure. The prize was a nice recognition for all the work done without expectations of any sort of financial gain, from a city that prides itself for its alternative art scene, but does very little to support it.

SC: What other new projects you as a collective are now working on?

AF: Same as always. We’re trying to find new ways of using the space, adapting to new members and trying to make things happen—hopefully with good quality but open to experimentation and failure, and inclusive of anyone who doesn’t discriminate against people for who they are. That’s my very own answer at least. 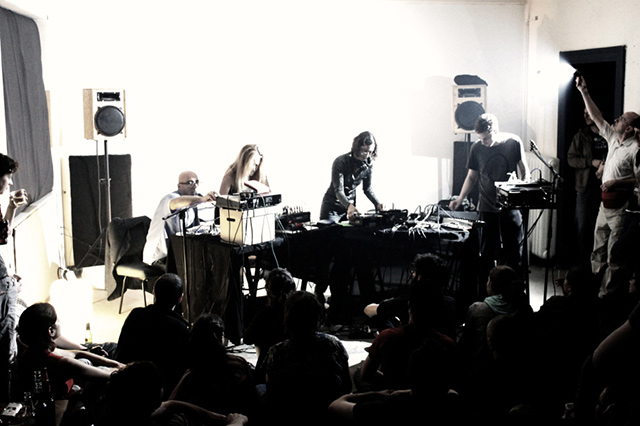 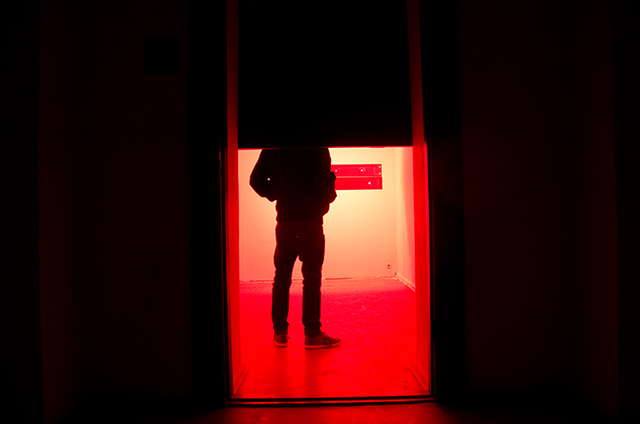 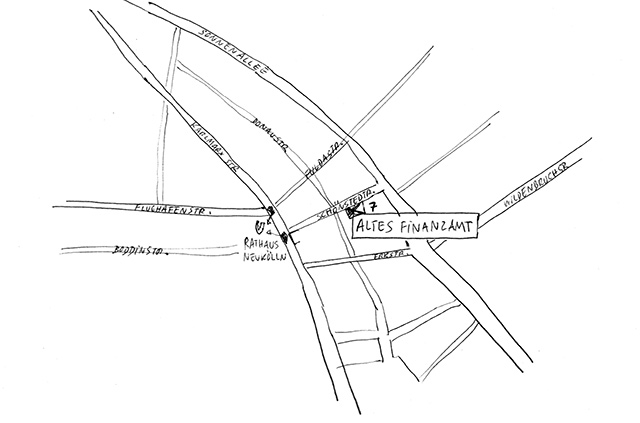 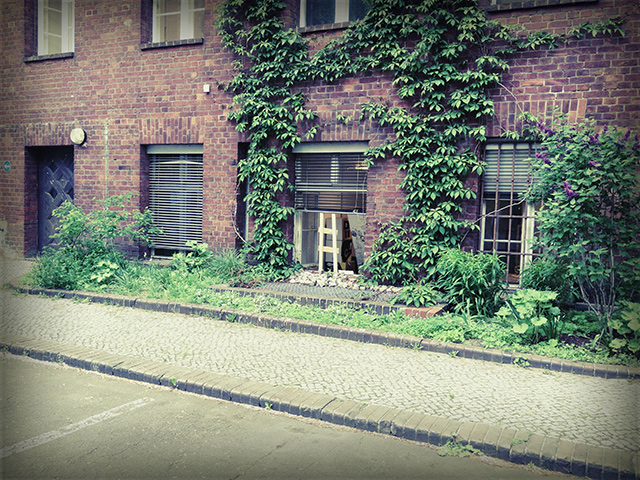 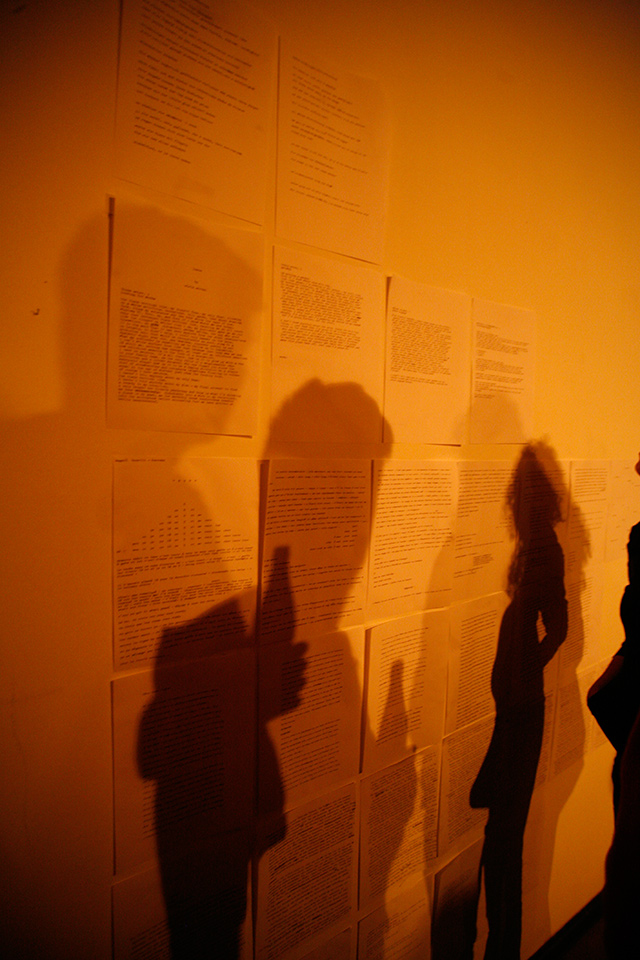 Altes Finanzamt is a Berlin-based collective formed by twelve members coming from different countries, mostly from Portugal. The name of the collective derives from the location in which the group usually gathers, the previous tax office in Neukölln, namely the Altes Finanzamt. Its members dedicate themselves to different artistic practices, such as photography, music, poetry, performance, and theatre. Altes Finanzamt hosts various weekly events, such as readings, parties, exhibitions, concerts, film screenings,and many more.

Socially engaged art in the 1990s and beyond

Between Utopia and Reality. The Martin Schick Learning Centre / NOT MY LAB

A conversation with Eyal Danon

An interview with Swiss artist San Keller, 12 May 2014, Zürich, Switzerland

Questions on community with Ursula Biemann