What has had the most influence on your career as an artist?
My art education started really early. What happened was that I dropped out of piano school when I was around 10 years old, and my parents got really worried about my future; so my mother decided to enrol me in a private drawing class, together with a daughter of a friend of hers. This was in Moscow in the late 70s and the lessons took place in a basement studio of a kind of a semi-official artist: A member of the artists' union, but one with modernistic tendencies, which were officially discouraged. The moment I entered this space, I knew that this is exactly where I wanted to be. I suspect it was more about a certain life style than art, because the studio was something so different than the mundane, late soviet reality: I felt like Alice falling into a rabbit hole and ending up in some fascinating, parallel realm. 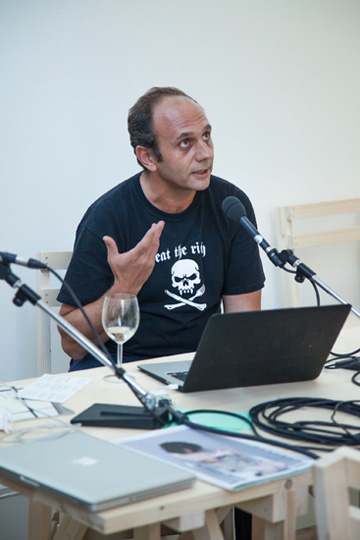 Once I was in this realm I had a very clear idea about what needed to be done: All I needed to do to make a mark on art history was to make a painting of a plaster bust of Julius Caesar wrapped in red drapery. I was very surprised that this has not been already done before, because I sincerely thought that this would be the world’s greatest artwork. All I needed to do was to learn to draw and paint.

How did this early experience shape your current projects and practise?
Well, it was both ridiculously academic and simultaneously had to do with exposure to a certain counter-cultural lifestyle, within a rigid, ideologically organized society. Eventually I discarded the formal thing, but the interest in setting up alternative situations persists to this day.

Is there a particular exhibition or project that you can single out as being the most succesful of how you want your work to be understood?
I think success is something best determined by others, posthumously. I suspect e-flux is probably something that had the most effect on others, then e-flux journal. But its really hard to say how all this will be perceived in the future. Maybe 50 years from now people will think that an entirely different work of mine – a video, or an experimental school, or time bank, or something I wrote – are much more significant. It’s really hard to say.

Your artistic practice lends itself to being read as curatorial, could you elaborate on why you insist on the difference between the artist and curator; couldn’t you see both practices as a form of meaning production by a cultural producer, instead of a binary opposition?
First of all, I am not sure meaning can be produced. It seems to me that meaning is a consequence of understanding, which something that arises in a subject. I think one can also make significant art without any intention to produce meaning or culture, and in fact I suspect that this is almost always the case with particularly good works of art. I think these terms are very pompous, imprecise and are used now as catch phrases that may be more appropriate for funding applications than to try to describe what art does. It would be good to try to be more humble.

I do see curators as people who work significantly differently than most artists. It’s a much more extravert activity that has more to do with aggregation then with the kind of work with the self that is implicit in much of artistic practice, even when it looks superficial on the surface. There is also a lot more distance between curators and their production than between artists and what they make. So I don’t really feel it’s helpful to conflate these things: it only confuses curators, and it seems to me that they are already a bit confused. Firstly because a lot of them actually have problems understanding art, and even beyond this, because there is a kind of an interesting vacuum at the centre of curatorial work. This is because the reasons for inclusion of this or that work in an exhibition, are primarily subjective, while so much effort goes into trying to present or account for this as something objective, systematic, almost scientific, which most of the time it is not. 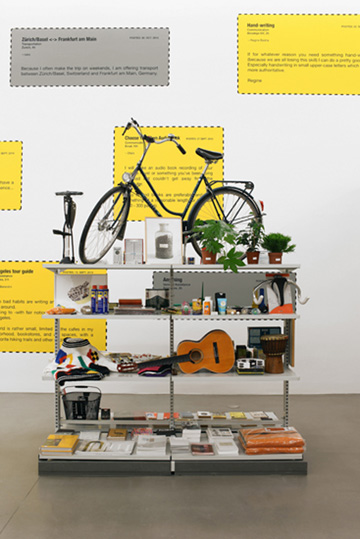 What projects are in the works for you over the next year, and what future opportunities do you envision for growth of e-flux? Have there been any new developments on the .art domain?
Next year I will continue running an experimental art school in Beirut, together with the Lebanese theorist Jalal Toufic. At the same time I am working on a feature-length film I shot in Russia and other parts of the former Soviet Union last summer. I am also working on a number of books: A book on the work of Mladen Stilinovic, a book of recipes by artists, and a book on e-flux projects over the past 10 year, among other things.

There hasn’t been much activity with the art domain so far. ICANN is dealing with this at glacial pace. Basically almost nothing happened in the process of evaluating domain applications in the past year and a half.

What artist, group of artists, or art movement do you think exemplify the current or next exciting move in contemporary art?
There seems to be renewed interest in art on the Internet, various online projects, games, etc. A lot of young artists are looking in that direction right now and I think it’s a very interesting area.

Your work takes on a curatorial quality and in that is not only highly collaborative but also takes the form of an archive, for example in the Martha Rosler Library (2005-), you collect information and you archive it however:the Martha Rosler Library project is attributed to you in collaboration with Martha Rosler herself, but on the website its cited as an e-flux project, how are we meant to understand the differencce between an e-flux project and a project by Anton Vidokle?

The library was a collaboration with Martha, but she also thinks of it as her own work: I saw that she listed this project in her bio as a solo exhibition. I very much like the fact that its so confusing. Its funny and very productive 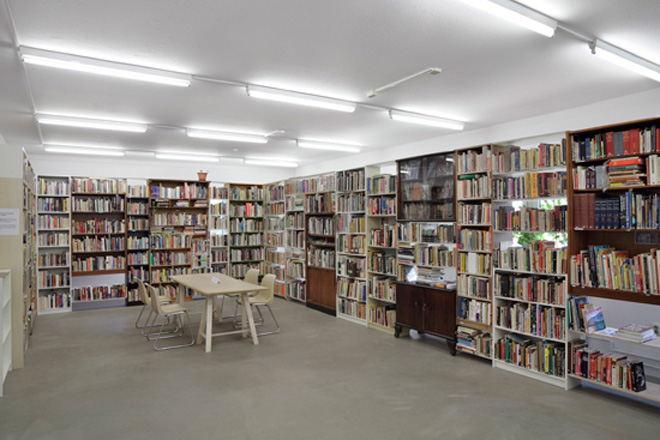 You characterize the e-flux as an artwork. Would you say that it is because all the other aspects of your individual practice are being subsumed under the corporate identity of e-flux that it now requires you to claim the company as being more than just a profit making endeavour, that must be recognised as a work of art? Is this in part a reaction to not being recognised as an indivual artist, but co-opting everything under a ‘coporate umbrella’?
Well that’s not really accurate I think. There are films and videos, which are also collaborations, but not necessarily e-flux projects, as well as other things, like unitednationsplaza or nightschool, or this current school in Beirut with Jalal. So I would not say that the totality of my activity is subsumed under the name e-flux. I think there is something in the way this question is posed that sets up a false dichotemy.

e-flux started as a kind of an art project, then over a span of 15 years it developed in a number of directions some of which are editorial, other curatorial, revenue generating, organizational, artistic, etc. It’s a very complex structure and I don’t pretent to fully understand what it actually is – this is also why it stays interesting for me. Furthermore, it continues developing and I can’t really envision any type of a final form or definition of what it will be in the future: we basically simply follow our evolving interests in many different activities. A scientist I know recently suggested that this sounds like a kind of an institute, maybe he is correct. Can institute be an artwork? Why not.

You do not claim individual creative authorship to e-flux and it is a collaboratively curated platform so why claim it as an artwork at all? And how is this model of artwork positioned in relation to other practices?
I don’t think e-flux is a “collaboratively curated platform.” I mean maybe some curators see it as that, but I think they are just projecting. Yes its probably significantly different from some artistic practices, while it is similar to some others, but I think that maybe this is something for people to figure out rather than just expect me to explain everything.

With e-flux you have developed a robust ecosystem that grants your team and collaborators the opportunity to engage selectively. Looking at your ecosystem as an extention of curation within increasing professionalisation of artistic practices in the overal cultural and creative industries, would you say a platform like e-flux heralds the working model for what could be future institutions by curators?
I hope not. People should try to develop new models themselves rather than just replicating what already exists. The important thing is that the “ecosystem” you are referring to came about not as an extention of curation, but in ways similar to various artists initiatives of the past hundred years or more. To understand the difference, you need to look carefuly at the history of artists’ self-organization, the kind of institutions they created, etc., and compare it with the kind of curatorial initiatives we’ve been seeing in the past 20 years or so. This would be a very productive exercise in the context of a curatorial studies program. 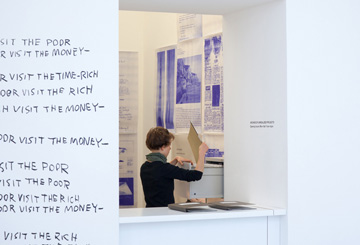 Late last year and with reactions earlier on in this year, the American art journal Triple Canopy published the Article ‘International Art English’ (2011), an article about the kind of language found in art and especially exhibition releases which “has enforced a hermeticism of contemporary’. Considering their research was collated through thousands of exhibition announcements published since 1999 by e-flux, what was your reaction to this criticism?

I find it very awkward when privileged Americans or Brits accuse foreigners of contaminating English language or not speaking it correctly, etc., because purity of language argument almost always has racist undertones. Hito Steyerl and Martha Rosler wrote in-depth responces to this article and I fully agree with the problems they point out.

As e-flux continues to mutate beyond its core press-release distribution service, what do you think will be the lasting legacy and impact of e-flux?
I wish I knew. Hopefully it will have something to do with preserving a certain kind of an independent voice.

The art world is proliferated with lists, one example being ArtReviews Power 100 which is in its 11th year now, how seriously do you consider your position on this concerned with “ambition and the realization of that ambition”?
Oh we don’t take this seriously at all. Its more of an inside art world joke. One should never take lists seriously.

Anton Vidokle is an artist, born in Moscow and living in New York and Berlin. His work has been exhibited internationally at Documenta 13, Venice Biennale, Lyon Biennial, Dakar Biennale, and at Tate Modern among others. As a founder of e-flux he has produced Do it, Utopia Station poster project, and organized An Image Bank for Everyday Revolutionary Life, and Martha Rosler Library. Other works include e-flux video rental and Time/Bank, co-organized with Julieta Aranda; and Unitednationsplaza—a twelve-month experimental school in Berlin initiated in response to the unrealized Manifesta 6. Vidokle is co-editor of e-flux journal along with Julieta Aranda and Brian Kuan Wood. Currently Vidokle is a Resident Professor at  Home Workspace Program, an educational program organized by Ashkal Alwan in Beriut.

Co-productive Exhibition-Making and Three Principal Categories of Organisation: the Background, the Middle-ground and the Foreground

One Hour with Saša Nabergoj