This issue of OnCurating, Total Abstraction began in 2011 as one of the manifestations of the exhibition project Abstract Possible. The Zurich Test, which was held at White Space in Zurich between May and June 2011. The exhibition was curated by Maria Lind and mediated and produced by students in the ZHdK Postgraduate Programme in Curating. Abstract Possible explored different key characteristics of abstraction – intended as formal, economic and “withdrawal”. It travelled in a variety of forms to different venues, before arriving for its last episode in Stockholm between January 2011 and April 2012, where it was presented at Tensta Konsthall, Bukowskis Auction House and the Centre for Fashion Studies at the University of Stockholm. This issue began as a close collaboration between the students Lindsey V. Sharman (now curator for the University of Calgary in the Founders’ Gallery at The Military Museum, Calgary) and Amber Hickey, (now a PhD researcher at the University of California Santa Cruz). The material was then reviewed and discussed by Dorothee Richter and Silvia Simoncelli, both lecturers at the Postgraduate Programme in Curating, Zurich, alongside a workshop on “Curating and Art Market(s)” in September 2013.

Initially intended as strictly developing the topic of formal abstraction, which was addressed in the Zurich show by artists Wade Guyton and Tommy Støckel, this issue of OnCurating has grown into a broader reflection, incorporating the urgent theme of  funding, ethics, and precarity in the art world. As such themes are recurrent in Lind’s practice, she decided to openly challenge them when organising one part of the Stockholm project in the form of an exhibition, at Bukovskis Auction House, works of the participating artists were to be sold at fixed prices and her fee for setting up the selection was to be devolved to the funding of the book Contemporary Art and Its Commercial Markets: A Report on Current Conditions and Future Scenarios, which she edited with Olav Velthuis. This move, while being consistent with Lind’s attitude of institutional critique, has generated much debate, and criticism, Bukowskis Auction House being affiliated with Lundin Petroleum, a controversial Swedish oil company. What Lind created was an almost paradoxical funding scenario, with artists offering their work for sale at the exhibition, and therefore funding the auction house directly and her project indirectly. While it had been devised as a critique on cultural policies – an attitude some observers, such as the culture blog tsnoK.se, recognised – Lind’s polemical gesture generated a debate on morals, which diverted the discussion and possibly negatively influenced its outcomes.

Lind’s gesture called for a deeper investigation on the side of those who had been involved in the Zurich episode. Exceeding the first reading of Lind’s move as a comment on the continued rise of corporate funding and other forms of private sponsorship throughout Europe, the Stockholm episode urged us to widen the horizon of our commitment.

Abstraction showed its face in the proceedings of the project: “money for Marx”, as Terry Eagleton explains, “is idealist through and through, a realm of chimerical fantasy in which all identity is ephemeral and any object may be transmuted at a stroke to any other.”[1] Capitalism estranges people and goods from any social bond and replaces social relations with abstract exchange value, up to the point where nothing is secure from these mechanisms, no artefact, no friendships, no working relations. According to this vision, Sven Lütticken defines abstract art, “as perhaps the (post-) modern art par excellence — its ‘windowless monads’ showing the abstract nature of society by refusing to represent its glimmering surfaces, or even its dark underside, giving back a blank stare rather than attempting to adjust traditional representation to a post-traditional world.”[2] While becoming the ultimate commodity, art includes and neutralizes critiques, with a détournement which is well explained by Terry Eagleton:

“The commodity as we have seen in the work of Marx, is transgressive, promiscuous, polymorphous; in its sublime self-expansiveness, its levelling passion to exchange with another of its kind, (…) Traversing with superb indifference the divisions of class, sex and race, of high and low, past and present, the commodity appears as an anarchic, iconoclastic force which mocks the obsessive rankings of traditional culture even as it in some sense depends upon them to secure the stable conditions for its own operations. Like much postmodernist culture, the commodity integrates high and low; but how progressive a gesture this is is radically ambiguous.”[3]

In this sense we would like to use this platform and argue that more than morals, what is at stake, is the position of culture in contemporary late capitalism and therefore the relevant question would rather be how this ambivalence could be (re)-presented and how a position could be formulated under the existing economic circumstances.

Being involved in one of the manifestations of a process of exhibition making that has addressed some key questions in cultural production and generated intense reactions, we too decided to take a closer look at the themes of economic abstraction, sponsoring in the arts and models of labour distribution. Total Abstraction explores these topics through a diverse collection of contributions: philosopher Roberto Nigro introduces the question of contemporary materialism in relation to abstraction, Dorothee Richter explores Curating and Art Market(s), Amber Hickey brings the argument into an international context by reflecting on the Tate’s long-running acceptance of sponsorship from BP; Lindsey V. Sharman’s Curatorial Outsourcing is an insightful peak into a practice that is becoming increasingly common in the world of exhibition-making, where artists and curators follow rules of a post-Fordist neoliberal working situation, voluntarily or not.

Retrospectively, we got in contact with artists Tommy Støckel and Liam Gillick, both involved in the Bukowskis exhibition, and discussed with them funding strategies in exhibition making. We also decided to take a closer look at Switzerland by interviewing curator Stefan Wagner, reflecting on the present situation of funding for independent art spaces in the country. Finally, an interview with Maria Lind by Silvia Simoncelli discusses the whole scenario with some temporal distance.

The initial motivations for this issue are still present. Our long-term collaboration with Maria Lind to realize Abstract Possible: The Zurich Test, has generated the content presented in the first part of the issue: interviews with participating artists Tommy Støckel and Wade Guyton offer two comparatively formal perspectives on the topic of abstraction, Liam Gillick’s text Abstraction and Meyer Shapiro’s The Nature of Abstract Art present a twofold interpretation of the field, while Damian Navarro’s inventive Carte Blanche contributes a rather concrete addition to this collection. 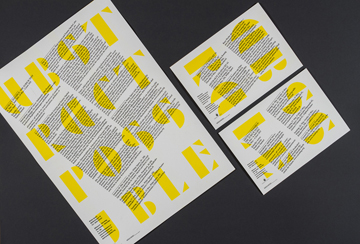