In 1963, Thomas Pynchon publishes V., a novel that would become cult classic. In Chapter 16, the American writer invents a new origin for the graffiti "Kilroy was here", famous since the GI landing on the Normandy coast; the little man with the big nose that peeps behind the wall is in fact a code inspired by a wiring diagram.

The explanation is convoluted. It delighted Damian Navarro. The Lausanne artist likes manipulating codes more than anything. He superimposes meanings and references, collects the allusive. Rather than work, he produces "clues" and "investigation documents."

Entre nous
At HEAD, Haute École d'Art et de Design (University of Art and Design) in Geneva, Damian Navarro is distinguished by his ability to scramble messages. His drawings, reduced to the essentials, overlap references to such an extent as to seem as many enigmas, created for bewildering the viewer: a "trap for experts"[1], as Navarro said. Damian remembers with malice, of an early drawing, a triangle which borrowed as much from the world of hip hop as from Blinky Palermo. It was meant as a denounce to the insider world, the entre nous of contemporary art. Already having borrowed his codes from two worlds apart from one another, that of the street and of the school, he adds a third, unearthed in, The Promise by Dürrenmatt. The image of a truffle, a circle bristling with spines, which symbolizes the failure of the detective in the novel by Dürrenmatt, is in the spirit of Damian Navarro an "indicator of misunderstanding". This esprit mille-feuille didn't leave him ever since.

Sculptures Parentales
The series of Sculptures Parentales gave a decisive direction to his work. The first Sculptures Parentales was born by chance, out of a blue cloth left on an orange bowl in the family kitchen.  This ghostly presence, evoking at the same time a negligent and daily gesture, retained Navarro's  look. Since then, he commandeered objects scattered in the his parents' house. This collection turns quickly into a search for pseudo-clues around the artist and his parents. Navarro built a fictitious investigation, he amuses himself multiplying false trails. What objects can explain who he is? How to tell the origins? Navarro plays Little Tom Thumb and leaves behind traces that, if  saying almost nothing about his family, reveal on the other hand a lot about his approach. These works, "discrete, but not intimate", lay the foundation for a subtle and "unpretentious" work.

Damian Navarro spent his childhood between two cultures. He grew up in Switzerland, into a family of Spanish origin. During the summer the family would travel back to Spain. These zigzag trips are the essential stages of a hybrid education. After the diploma, Damian decides to enroll at the HEAD. His parents do not object. Gradually, as Sculptures Parentales develop, they even show a sustained interest in this activity,  their son is so passionate about. They begin to propose items, "archives" they choose in their immediate environment. Reflection becomes common: "I ​​opened a playing field for them, very fertile for them and for me."Sculptures Parentales form, from that moment on, the epicentre around which the work is developed, through hybridization and subsequent transplants. They also allow us to overcome that entre nous  denounced by the drawings. The work becomes a way to communicate, material to exchange.

W
On this ground for reflection other drawings germinate. The inquiry about the origins is enriched by a new series of clues. Navarro, with his recurring interest in codes and hybridization ended naturally by crossing the world of American novelist Thomas Pynchon. Pynchon's taste for mystery, the accumulation of details, borrowing from all sorts of culture, from the most erudite to the most popular, could only fascinate the young artist. The obsession the novelist's obsession for the letter V [2] finds its answer in the W Damian Navarro uses as a marker of identity: a zigzag identity, marking the trajectory of the artist between Spain and Switzerland; a letter used in Northern Europe, almost unknown in the Romance languages. It was then the director John Carpenter and his horror film Fog (1980) who gave Navarro is the idea of an "invisible architecture". W became the basis of a grid on which images come to lay, a "supporting scaffold", "like the one we saw on the roadside in Spain", where images taken from the most diverse sources, function as as many narrative triggers.

The W drawings series eventually form a vast "parchment of data," a collage of words that says well the back and forth between past and present, Switzerland and Spain, image and idea. Navarro structures the space of these drawings with collages of marbled papers. Water prints its arabesques in colour, echoing the theory of "continuous movement" developed by Nicolas Bourriaud in The  Radicant: "After the time of the engagement, we experience pathetic difficulty remembering anything in a cultural volatile space..."says Nicolas Bourriaud, who elaborates on the idea of a “liquid modernity."[3]

Horror and science fiction, comics, novels and scientific theories, Navarro fires on all cylinders, but it is the margins which interest him the most. This in-between where the "hypothesis is more interesting than the statement," where the image turns into a trap, where the "elusive" is the key.

When he draws from the archives of cinema, he scrutinizes the hidden part, which is not seen in the film. His drawings aim to highlight the intangible. His sculptures are annoying by their enigmatic opacity, if deceptively simple. If Damian Navarro owes something to Duchamp, it is first to his theory of the infra-thin[4]. Between absence and presence, nearly nothing and nothing, said and unsaid, hidden and revealed, Navarro doesn't choose. Just as he doesn't opt for either abstraction or figuration. Forms interest him "for the charge of ideas that they can bring," and perhaps even more, for the "different levels of reading" they can suggest. Each new work is as a camouflage operation, where the detective is also the murderer. 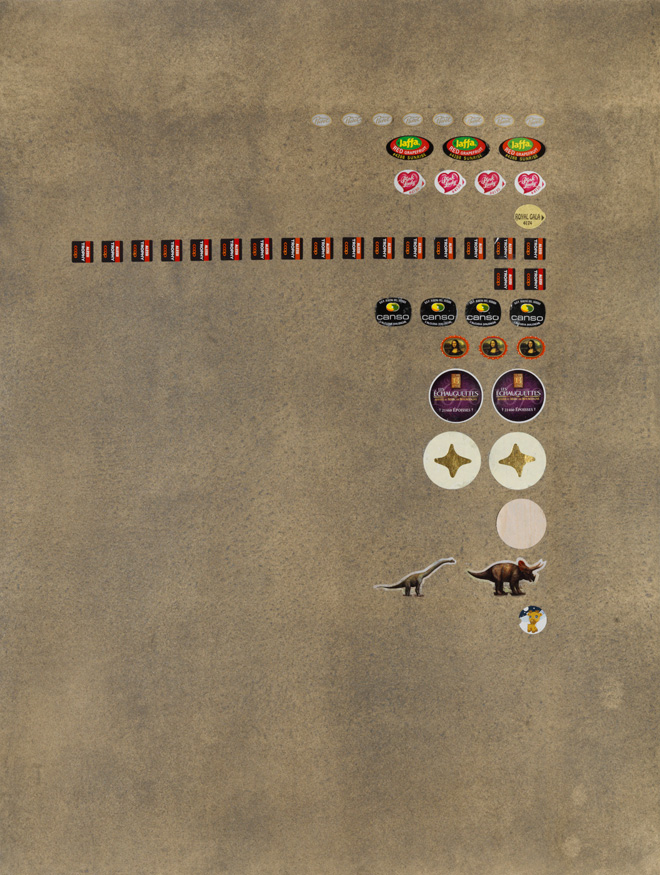 Notes
1 All quotes by Damian Navarro are from an interview at Circuit, Lausanne, April 23, 2011.
2 V. is the debut novel of Thomas Pynchon, published in 1963.
3 Nicolas Bourriaud, Radicant, pour une esthétique de la globalisation, Paris, 2009, p.94
4 “The possible, implying the becoming - the passage from one to the other takes place in the infra-thin. [...] fire without smoke, the warmth of a seat which has just been left, reflection from a mirror or glass, watered silk, iridescents, the people who go through (subway gates) at the very last moment, velvet trousers their whistling sound is an infra-thin separation signalled.” Marcel Duchamp, Notes. Arranged and translated by Paul Matisse, G.K. Hall, Boston, 1983, p 45

Damian Navarro (born 1983) is Swiss and Spanish. He lives and works in Lausanne. He has a diploma degree in Visual Arts from Geneva University of Arts and Design. His work doesn’t intend to prove anything. It’s mostly about testing and trying to confront trivial informations or historical facts which don’t necessarily seemed ever made to cross. Despite recurrent use of elements from his everyday life, his work can be read as chronicles more than merely autobiographical. In 2011 Damian Navarro received the Swiss Art Award, Prix de l’Office Fédéral de la Culture, Basel, Switzerland. He was artist in residency at Atelier Vaudois du 700 at Cité Internationale des Arts, Paris in 2013.


Véronique Ribordy (1961, born in Sion, lives in Vevey, Switzerland) is an art historian, critic and curator. She graduated in History of Art at University of Geneva, Switzerland and received her MAS in Curating form the University of the Arts, Zurich, in 2011. She has been working for many years as journalist and has collaborated with several museums and cultural institutions in the Valais region (Switzerland) since 1989, such as Manoir de Martigny, Fondation Pierre Gianadda Martigny, Caves de Courten Sierre. She is currently working on a Contemporary Art exhibition to be held at the Neuchâtel Museum of History and Art, Switzerland, in the summer 2015. Parallel to this, she is researching the South East Asian and Asian markets to source and develop curatorial opportunities with contemporary artists and exhibition spaces for an exchange with Swiss artists.