Interview with Raqs Media Collective on the  exhibition, Sarai Reader 09

Gulru Vardar and Chloé Nicolet-dit-Félix: Since the creation of Raqs Media Collective in 1992, you have been working as artists and curators, exploring a wide array of mediums of creativity and collaborating with people from various artistic fields. How do you share this span of responsibilities and how do you question the issue of shared authorship?

Raqs Media Collective: All our projects are jointly authored. We do not identify any one of us as the ‘custodian’ of a particular practice or method or style or work process. The work that we do, artistically and curatorial, emerges and exists at the intersection of our triangulated curiosities, skills and desires. In some ways, we could say, that Raqs, which is more than the sum of its personified parts (any one of us as individuals), is the author.

G/C: Sarai is a program that you initiated in 2000, as part of the Centre for the Study of Developing Societies in Delhi, India; it is composed of researchers and practitioners, who strive to develop a model of research-practice that is public and creative, as well as a multidisciplinary space and a platform involving many ideas and artistic productions.  What did you manage to embody in this interdisciplinary platform?

Raqs: What we managed to embody was a fundamental move, a refusal to sustain the rupture between theory and practice, between thinking and doing and creating and reflecting. Ours was a wager that the conversation between practices and methods was more important than the soliloquies of any one kind of practice. We remain committed to that vision, even today. 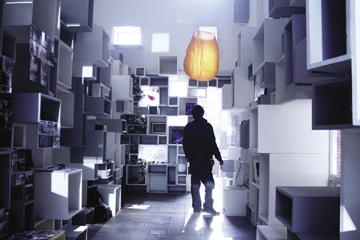 G/C: You are currently curating the exhibition Sarai Reader 09 at the Devi Art Foundation in Gurgoan, India; a living exhibition in the form of a series of unfolding episodes over time, with a continual transformation. What does the exhibition intend to investigate and what are the spectrum of possibilities?

Raqs: The exhibition investigates practice itself. Here, we mean practice in its fullest sense, as an ethic of making, as a mode of living thought. We are particularly interested in what we call ‘the sensation of thinking’. We are interested in the exhibition being a space where artists can develop their thinking, have conversations with each other, respond, not just to each other, but to time itself, making it possible for them to embrace the full spectrum of possibilities latent in their work process. This means not being tied down to the final form of an object, but to be committed to make an art work travel the length and breadth of its own possibilities.

The potential consists in the generation of a different temporal rhythm, one in which things can grow, branch out, make connections. Most exhibitions focus on how an art object affects a visitor, here, diverse art practices are, in some senses, visitors to each other’s presence.

They relate, not as frozen entities but as dynamic processes.They have changed in each other’s company. This exhibition is an index of that transformation.

G/C: Could you give an example of how some of the practices in Sarai Reader 09 engaged in a dialogue and altered as a result of this? 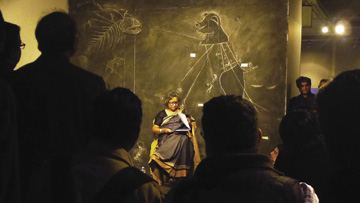 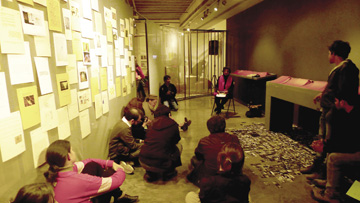 Raqs: An artist who had been producing recorded ‘auditions’ found several participants amongst his fellow artists; another artist who was working on handmade chap books got many of her peers to write stories for her. A photographer created a self-reflexive archive of the exhibition that he placed on site. An artist who works with drawings developed a new mode of suspending miniature cut-outs made from his drawings as a response to the work of other artists. A performance artist started what he called an ‘unschool’ of performance, which had several of the other artists as pupils. A graphic novelist made and erased a large wall mural several times, translating in time the sequentiality that she works through in frames. Each erasure was an enthusiastically participatory ritual. These are some of the discrete examples that come to mind, but more importantly, there has been a very alive process of osmosis.

G/C: The first episode of the exhibition opened on August 18 2012 at the Devi Art Foundation in Delhi, the following three episodes are now unfolding ; what was the public response and what reactions did the project generate?

Raqs: We’ve had an excellent response. It changed, from anticipation, when all that was visible were proposals and a design on space; to participation, when proposals began to be realized; to enthusiasm, when works began to trigger new resonances; to reflection and a sense of carrying things forward in a significant way. The episodes, which are days when the exhibition reconfigures itself, through the inhalation of new work, the exhalation of ideas that have been developing, and a sort of metabolic transfer of energies and concept, have been exhilarating.

The last episode, which invited fifteen women to reflect on their own practices was remarkable, it generated a kind of electric attentiveness. During the evening various events took place, including:

- A scientist talking about an epidemic of hysterectomies in the hinterland, intersecting choice, compulsion, labour, medical interventions and what happens to the female body as it gets processed as a productive machine.
- A film theorist developing her conjectures on the vocabulary of love.
- A poet articulating her rage against patriarchy with humour, skepticism and a terse love of language.
- A singer performing against the terms of her contractual obligations in the entertainment industry.
- A curator exploring the idea of artistic failure through the report of an email exchange with artists.

These are just some of the projects,  there were many more and all of these practices were contextualized within a space of artistic work, of practice itself. It ended up being a kind of breakthrough for the public, when the borders between different kinds of doing and being became permeable to all sorts of osmotic transfers.

G/C: Did the recent sad event – where a young woman regrettably died after being beaten and gang raped on a bus in Delhi – and the worldwide public outburst against this incident and violence against women, have any influences on Sarai Reader 09?

Raqs: No one has been untouched by the tragedy that struck the young woman. The whole city, especially a lot of young people, have been transformed by the way in which they have come out against misogyny on the streets. We are not removed from this situation, and in some ways, are in the thick of it in our personal capacities, as are some of the artists. An artist who works with performance and has been part of Sarai Reader 09 has been developing silent performances that draw attention to the vulnerability of the body, but we are doing these things in the course of our daily lives, not especially, or solely in the context of the exhibition. There is a lot of writing and conversation happening; and as what often happens in a moment of transformation, strangers are talking to strangers. On the episode that opens on February 3rd 2013, we will feature a slide show of photographs of the protests by a young photographer who has been meticulously documenting every demonstration and protest.

Raqs: We see this exhibition as an open book. By this we mean it has a very publication like form. It announces itself; it creates its own critical apparatus. And, it takes its inspiration from the eclectic adventurousness and rigor of the Sarai Readers. There will be an exhibition related publication, which will be the Ninth Sarai Reader and we are calling it “Projections”. This is not going to be a catalog of the show. Rather, it will be a kind of annotative device, that takes the concepts of the exhibition discursively further, but also works as a kind of exhibition in print and paper.

G/C: By sending out a call for proposals, for the exhibition and the publication of “Sarai Reader 09”, you must have received many applications, how did the selection process develop and what criteria did you set?

Raqs: We have a curatorial colloquium, which expands beyond the three of us in Raqs to colleagues who have been working with us in Sarai for several years. We meet at regular intervals, discuss each proposal threadbare, explore its potentials, argue its merits and try and see how best we can position an idea. Naturally, not every proposal makes it, but those that do, go through a very thorough process, which helps us hone and sharpen the artists intention, and sometimes to raise the level of the conceptual ambition of the work.

G/C: So, is this shared authorship, or part of a wider curatorial collective?

Raqs: Perhaps it is something beyond authorship. We have a group of people – the wider curatorial  colloquium – that has been thinking a set of questions about practice with us for a while. This exhibition is a way of marking milestones and cardinal points in that developing thought process. None of us claims that process as property. We, as Raqs, instigated this phenomenon, but now it finds its way into the world under a variety of influences, including our own. That is a more accurate way of looking at the situation of Sarai Reader 09.

G/C: As co-curators of Manifesta 7, The Rest of Now, in Trentino, Italy (2008) – and your ongoing project Sarai, how do you consider authorship in your curatorial practice?

Raqs: For us, Authorship is not something that collapses into bodies and biographies alone. A moment and a duration are also authors. A network can be an author. A desire and a dilemma can also author a work. We see authorship in terms of the things that make a work appear in the world. Only some of those things are people. Sometimes more than one people cause a work to appear. This can mean that authorship may be vested in each of these people as individuals, it can also mean that it is vested in the relationship that ties these individuals together. Curatorially, we seek to be open to all these nuances when we consider authorship. We are not impresarios, we are not directors, we are not managers. Perhaps the most interesting form our curatorial model of authorship takes is as something of a hybrid between catalyst, witness, agent and interlocutor. 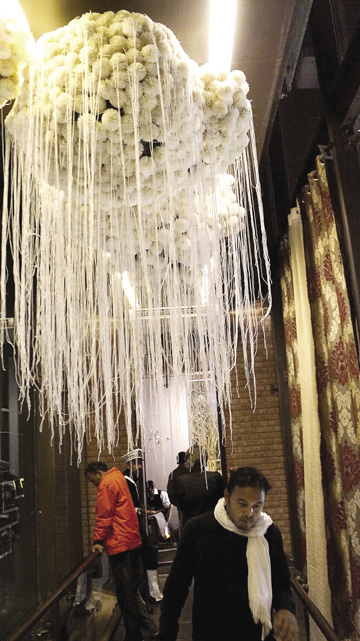 Raqs Media Collective remains closely involved with the Sarai program at the Centre for the Study of Developing Societies (www.sarai.net), an initiative they co-founded in 2000. Sarai Reader 09 is an ongoing contemporary art exhibition (18 August 2012 – 16 April 2013) at the Devi Art Foundation, Gurgaon, India.

On Artistic and Curatorial Authorship

Between Hype and Attitude. Motivations, Presentation Strategies and Fields of Conflict for “Curartists”

Curatorial and Artistic Practice as Political Process: an interview with Artur Zmijewski

An interview with Kristina Lee Podesva

Interview with Raqs Media Collective on the  exhibition, Sarai Reader 09

Public Art: Consequences of a Gesture?* An Interview with Mary Jane Jacob

Artist-curator Gavin Wade on authorship, curating at Eastside Projects and the post-industrial city

An Interview with Tania Bruguera

Marion von Osten on her collaborative style and multiple roles