One of the problems with past approaches to institutional critique, is that they set up a binary: on the one hand there is the hide-bound institution, a centralised system embedded in itsown bureaucratic wants and needs; on the other hand, there is the "independent" curator or artist, heroically criticising and resisting, sometimes from the outside, sometimes fromwithin. At the Curating can be learned, but can it be taught? seminar at Northern Gallery for Contemporary Art NGCA in 2005, Barnaby Drabble and Lisa Le Feuvre pointed out that the binary is not so clear cut1: independent curators bear the burden of maintaining their own freelance profile, sometimes at the expense of artists', whereas the more anonymous institutional curator can get on with refining the access of the audience to the art — they may have to jockey with Byzantine beurocracy, but at least they stand a chance of understanding their local audiences, and what it might mean to participate.

Recently, artists have explored more complex relationships between institution, artist and audience, even to the extent of institutionalising themselves. The Yes Men, for example, are famous for their fake-self-institutional tactics: a cut-and-paste Dow Chemicals web site led to the BBC contacting them for a statement, and they seized the opportunity to announce on television that Dow chemicals would "do the right thing" and make full compensation for the Bhopal tragedy in India, making it extremely difficult for Dow to spin a retraction with any degree of self-righteousness. In a more specific art-world context, Harwood@Mongrel was commissioned to work with the Tate collection in 2001. His work with the behind-the-scenes collection was in fact presented very front-of-house: he copied the Tate publicity web site, inserting montaged images from famous artists in the collection, and rewriting the sanitised "history of the Tate" to include slavery, and prison hulks. Unsurprisingly, this involved the curator in highly interesting negotiations with areas of the institution not usually critiqued in terms of power — in this case, the marketing department in charge of the website, who requested a great deal of modification of the artwork in order to differentiate the work from the "real" Tate site2.

Artists can, of course, not only critically copy the "look" of an institution, but can also decide what kind of system they might choose to run their own organisation.

NODE_London for example, managed the extraordinary feat of getting funding from Arts Council England for a "season of media arts" in 2006 across London, which had no central curator, but used a linked system of nodes — small groups of artists or organisations in different locations.3 NODE_ London were admirably open about their processes, and in order to discuss their methods called upon the three current network models of centralised, decentralised, or distributed systems.4 The participants used collaborative production tools such as wikis extensively, but because there was some centralisation of publicity and co-ordination, it wasn't purely a distributed system. Ironically, they discovered, it wasn't always the centralised business models that worked in the most efficient way.

The history of self-institutionalisation by artists does of course have a long knowledge-base in the form of artist-run centresand "community arts",5 but what is interesting about the case of NODE_London is that the debates about artist/ curator modelswere overtaken by the issues of partici- pative structures for larger groups of people who may be neither artist or curators, but"audience/participants." These recent choices of system also strongly relate to much recent debate concerning methods of art interaction, participation, collaboration and the relational 6. All of these terms are prey to a notoriously slippery terminology, and a sense that all these things are vaguely desirable — after all, who would admit that they didn't want to "relate"? In practice, all participatory systems need an accurate description of exactly who is intended to participate in what, and to what extent, and in addition the systems demand many skills to make that participation likely to happen. Even the famous Joseph Beuys commented on reluctant audience behaviours in response to his Bureau for direct democracy installation at Documenta 5: "Some only come to the door and leave in fright, as if they had come into the wrong restroom."7 Sometimes, you might build it, but they don't come.

In the debates about relational systems, the artworks discussed (for example Rirkrit Tiravanija's social/ eating spaces, or Anthony Gormley's invitation for the public to display themselves on the fifth plinth in Trafalgar Square) have primarily concerned the audience as participants, with more or less scope for either tokenistic or more engaged creative input. Considering audiences as participants might have profoundly affected the systems of institutions, but the role of audience as curators is a far more radical proposal. However, it could be argued that audiences have already been doing this for some time — selectingand arranging works from museums' online collections, or tagging favourites in YouTube. The notion of selection is only one part of a curator's role however, and certain examples go further towards seeing the audience in organizing and arranging roles. Rhizome's art base is an online repository of art, and the artists self-submitting work can also tag them with keywords.

This is especially useful when nomenclatures and categories of art are still under development. The most commonly used keywords, which can include keyword searches by audiences, appear more prominently, start to gain acceptance, and move towards a taxonomy, or at least a folksonomy based upon a wide base of participation. It is interesting to note, however, thatRhizome also display a set of keywords edited and organized by a panel of experts, which give a clearer structural picture, less prone to the artefacts or glitches of popularity or self-promotion.

The notion of audience as curator obviously raises huge issues of quality and skill for any institution, but, so far, the role of the curator as expert taxonomiser, arranger, and arbiter does not seem to have expired. With systems such as Rhizome's which offer both expert and popular structures in parallel, it would seem that there is still space for both systems, whereeach enhances and informs the other.

If artists and curators such as node_LONDON or Rhizome have already self-institutionalised in terms of making their own collections and exhibitions, and have already integrated both artists and audiences into the ways in which their systems work, then perhaps older models of institutional critique need to be updated in terms of more subtle differentiations of kinds of system. Are these institutions really distributed, or just decentralized?

Artists are, as ever, leading this critique of complex systems, and might have gained through experience a much more accurate understanding of systems of participation than evenprominent curators. Jeanne van Heeswijk, for example, has been working in participatory art projects for many years, including housing projects. As part of the exhibition tatig sein she installed Works 1993-2004, typologies and capacities, and with Maurits de Bruijn she made a database of all the people involved in certain projects, and the relationships between them. From this database she made a sculptural installation, with wires joining the people — each person's role being represented by a different kinds of potato — curators, for example, being the "Mentor" variety8. This fantastically complex yet clear visual representation of the nodes and connections of collaborative projects wittily critiques the complexities of decentralized modes of working in relation to art. During each exhibition, the potatoes showed a tendency to start to sprout — putting out their own tendrils and forming an unpredictable network of connections of their own ...

In teaching an MA in Curating now, it seems important to equip students with a basic understanding of systems, not only in relation to their own position as curators, but their ownrelationship to artists and audiences. They are, after all unlikely to work purely on the outside or inside of institutions, will need to be flexible about their position, whether embedded, or some other kind of node, and may even self-institutionalise at some stage. The binary opposition of "inside" or "outside" positions on institutions needs further refinement if the position of artists, curators and audiences within institutional systems is to be understood in terms of levels of power, rather than prey to vague buzzwords of tokenistic or compulsory "participation." 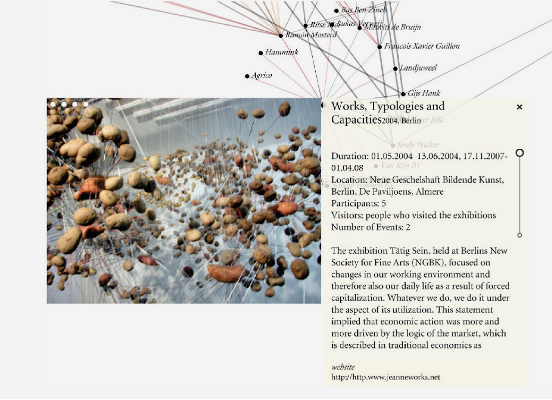 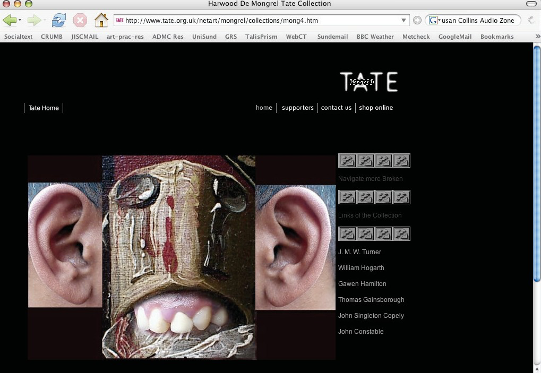 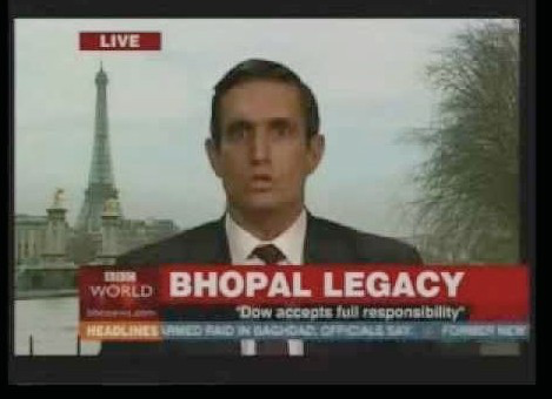 Beryl Graham is a Professor of New Media Art at the School of Arts, Design and Media, University of Sunderland, and co- editor of CRUMB. She is a writer, curator, and educator with many years of professional experience as a media arts organiser, and was head of the photography department at Projects UK, Newcastle, for six years. She curated the internationalexhibition serious games for the Laing and Barbican art galleries, and has also worked with The Exploratorium, San Francisco, and San Francisco Camerawork.

2 Sarah Cook, "An interview with Matthew Gansallo,"  CruMB, 2001a. http://www.crumbweb.org/getInterviewDetail.php?id=1.

The second part of the publication for the symposium, Institution as Medium. Curating as Institutional Critique?, organised by the Kunsthalle Fridericianum and the Zurich Postgraduate Programme in Curating (Institute for Cultural Studies, Department of Cultural Analysis, Zurich University of the Arts), deals with notion of art-mediation and addressing publics in the realm of institutional critique. The question remains: how can a practice that intends to radically show the conditionality of art, its financial entanglements, and its function as a means of distinction, be related to institutions and curators’ activities therein? Is this not a contradiction in terms? The aim of the symposium was to explore these contradictions, as well as the possibilities and limitations of critical curatorial practice.

by Dorothee Richter and Rein Wolfs

Crisis as form. Curating and the logic of Mediation.[1]

by Giovanni Carmine and Hassan Khan

by Marysia Lewandowska and Neil Cummings

Institutional Critique and the City Museum of Tel Aviv

by Maja Ciric and Isin Onol

Can Curating be Taught?