This text describes the process-related concept of transformation active during the 2009 exhibition year of the Stadtgalerie Bern (Loge).Additionally, it will show the continuation of this transformative process into other exhibition venues, such as the Marks BlondProject, the Visarte Gallery, as well as Shedhalle in Zurich, Switzerland.

The guest-curatorial project Loge is located in the Stadtgalerie (city gallery),

an exhibition space situated in the court of the artist-in-residence house Progr. Loge functions as a platform for various artistic and curatorial projects. In 2009 the future of Loge was uncertain, due to commercial city interests. This precarious situation led to theformulation of new questions, resulting in the focus on context specific projects.

Two exemplary exhibitions of the Stadtgalerie (Loge) in 2009 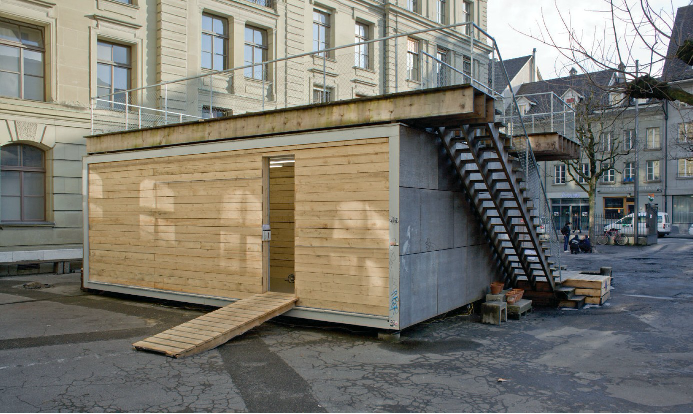 The first exhibition with the title reine Vernunft (Pure reason) was created by Swiss artists Heinrich Gartentor and Delphine Reist. The second exhibition Eine schwalbe macht noch keinen Frühling (one swallow is not yet spring) was installed by Belgian artist AdrienTirtiaux. reine Vernunft addresses the conflict between commercial interests and art production and directly related to the precarious political situation of Loge itself. Heinrich Gartentor was invited first. He chose to divide the exhibition space into two parts, re-designingthe larger part as a commercial space. Part of his concept was to close this space to the public and generate income from rent. It was atthis point that he acquired the wooden slats which in following became an important formal element of the ongoing exhibition year. Thewindows were boarded up with wooden slats, rendering the main entrance inaccessible. The now much smaller space was returned withthe proposition to use it as an exhibition space. So after Heinrich Gartentor the "real" exhibition space was minimized to approximately ten square meters.

Meanwhile, in the run-up to opening day, Gartentor placed ads in the newspaper and on the internet to let his intentions about the space be known. During the exhibition period, Gartentor was absorbed in negotiations with people who were interested in renting the storage room. Most of them were interested in using it as temporary restaurant or bar because of its ideal location in the city.

For this exhibition Delphine Reist realized the work Megaphone, an installation composed of five megaphones directly placedon the floor. Situated in different rhythmic order they projected sounds usually heard in demonstrations. These "whistles, screams, and horns" were able to penetrate the "forbidden" walls of the other space and the walls of the City Gallery.

Using the pavilion architecture of the city gallery as a starting point, Adrien Tirtiaux raised questions on the role of public space and itspolitical connotations. Tirtiaux opened up the space closed by Gartentor and transformed it back into a public space, a space with nature, socialattitudes, and political control. The exhibition became "public."

Adrien Tirtiaux re-used elements from the first exhibition. He kept the wall built to separate the room. One window was open during thewhole exhibition time. People could enter at any time and were free to do whatever they wanted. Another element was a nest he fixedto the wooden boards. Even the sun was included and as a matter of respect he drew a sundial on the wall. A tree was planted in the ground under the main space, enabling it to grow into the main exhibitionspace through a hole in the floor. Afterwards, the tree became a part of the third exhibition.

So, both exhibitions were not "finished" on the opening day. Part of their exhibition concept was the idea of changeable development.

Storage-time and loss of exhibition materials

After the Loge exhibition year the wooden slats were stored in a nearby courtyard for about three months. The ownership of thewooden slats and their application were not obvious and no one used them for other projects. During the wintertime the materialbecame damaged due to rain. Other elements were left unused, disposed of, or taken elsewhere and re-used, like the tree thatbecame part of the suburban garden plot of Jimmy Ochsenbein.

Projects in the Marks Blond Project Space and the Visarte Gallery, Bern

The exhibition Joining things together, you are talking about floor, I am talking about furniture! by Swiss artist Kaspar Bucher andSlovakian artist Tomáš Džadon was about misunderstandings of people working together. The idea of a strange interior was used tovisualize questions the exhibition project had raised. It took place April 2010 in the Marks Blond Project exhibition space.

Part of the material was re-used by students of The Bern University of the Arts for an interdisciplinary project supervised by ResIngold, professor at the Art Academy, Munich and was exhibited in June 2010 at the Visarte Gallery. The original concept was the idea to rebuild the prison cell of the Jim Jarmusch's movie, down by law. This complex project brought together students from such different fields of study as writing, new media and curatorial practice. One aspect of the project was to use the sound of the woodenslats as part of the installation.

Scénario n°2 for the exhibition at Shedhalle, Zurich 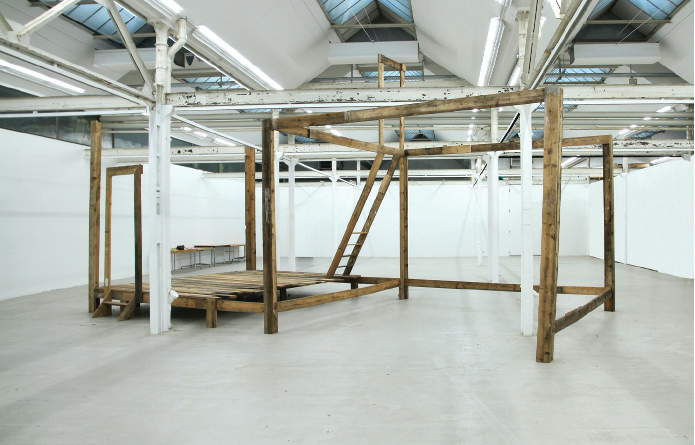 Following an invitation from Shedhalle, several scenarios could be the starting point for the exhibition:

Finally, the concept was to create a space which is recognizable as such, but at the same time function as a spatial installation. Thiswork consists of a structure of only implied space — three "undone" spaces are visible. But the structure itself is something between a plan, a drawing, aninstallation, and space. It is rather an idea of space than a real space. Nevertheless, it was the exhibition space of a work by the artistGeorg Keller. The question as to how space develops is central to this. It's important to pay equal attention to the reshaping as well asthe dissolution of the space. The reuse of the same (artistic) material in different contexts is also a central aspect of process-related work andcontinuously requires new forms of appropriation and reinterpretation.

This changeable political moment was the motivation to include the idea of process into the curatorial concept. To look at the contextas part of or even as a complete element of the exhibitions was essential. This offered the option for process-related exhibitions and site-specific projects. The exhibits would be related to each other and would be able to address the political implications and architecture asa whole. A succession of exhibitions took place in which the same elements were recycled in alternating contexts. This process of re-use andchange took on a dynamic of its own. The recycled materials were wooden slats, mirrors and a tree, the wooden slats becoming the centralelement used in all exhibition projects. It was interesting to observe how the slats changed context and identity from one exhibition tothe other and evolved as one of the key elements of transformation. 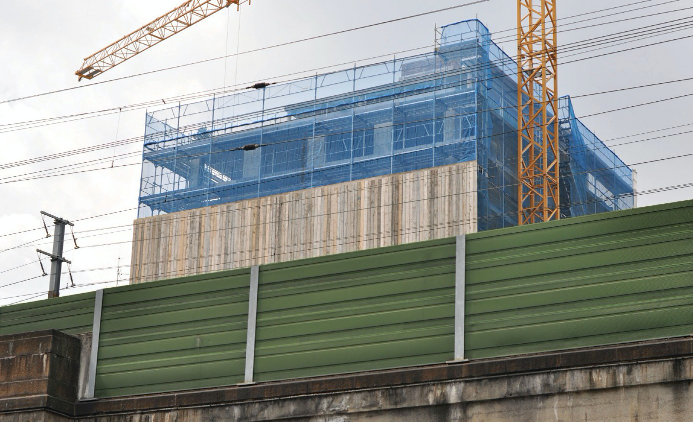 But, how can we describe this specific form of a time-related process? Contemporary artistic work is based on communicative, semiotic,and linguistic research that can produce tangible processes by means of images and language. As a process is inseparable from the element of time, it is related to the course of time. An objective description of time does not exist, which makes it difficult to characterize process-related projects. Scientists, from the ancient Greek philosophers to physicists like Newton, have tried to describe the abstract idea of time. All kinds of explanations of time exist, from the spiritual to the rational.

The process is already the work, which means that the development (the production) is part of the work. And this process-related project makes the presence of time in the work evident. It seems like the past and the present are there at the same time, assuming that thevisitor knows the concept of the work. This work also provides a kind of buttress against the pressures of modernity. As an essential part of these projects, the (time-related) progression shows how the idea of process relates to mass production, global capitalism and differences in nationality. But even if the idea of process already implies a certain kind of content, it seems that we can look at process as a form, comparable to an empty canvas. Is it possible to call process a form that can be used to transform a critical-artistic point of view into a tangible work? In upcoming exhibitions it will become important in which sense the wooden slats can be further manipulated to convey more directly the content of a work above and beyond the formal level.

Damian Jurt studied at the Geneva University of Art and Design and at the School of Visual Arts in New York. He also completed the Postgraduate Programme in Curating at the Zurich University of the Arts. Since 2008 he has been a research assistant at the Art Institute of the Basel Academy of Art and Design. As the artistic director of the City Gallery (Loge) in Bern in 2009, Jurt focused on contextual exhibition formats that show how social and  political tensions can  be interpreted within the arts.In 2010 Jurt curated the exhibition Between spaces at the Kunstmuseum Luzern. In 2011 he also acted as curator at the Academy of Media Arts Cologne and participated in conferences at the Lucerne University of Applied Sciences and Art and at the Nida Art Colony in Nida, Lithuania.

The second part of the publication for the symposium, Institution as Medium. Curating as Institutional Critique?, organised by the Kunsthalle Fridericianum and the Zurich Postgraduate Programme in Curating (Institute for Cultural Studies, Department of Cultural Analysis, Zurich University of the Arts), deals with notion of art-mediation and addressing publics in the realm of institutional critique. The question remains: how can a practice that intends to radically show the conditionality of art, its financial entanglements, and its function as a means of distinction, be related to institutions and curators’ activities therein? Is this not a contradiction in terms? The aim of the symposium was to explore these contradictions, as well as the possibilities and limitations of critical curatorial practice.

by Dorothee Richter and Rein Wolfs

Crisis as form. Curating and the logic of Mediation.[1]

by Giovanni Carmine and Hassan Khan

by Marysia Lewandowska and Neil Cummings

Institutional Critique and the City Museum of Tel Aviv

by Maja Ciric and Isin Onol

Can Curating be Taught?