The co-authored catalogue archives texts that describe the production and conceptualization of the three post-institutional apartment exhibitions Millet Matrix I (2010), II (2012) and III (2013). It features Tomas’ essay on Desnoyers’ error-based needlegraph work as a form of conceptual art and programming language as well as interviews with Tomas by Marc James Léger on the commissioning of the work Millet Matrix.

How do art exhibitions serve as liminal sites for the investigation of the invisible institutional forces and influences that condition contemporary visual art practices? How can an apartment space, as a distinct form of socio-cultural environment, operate differently from public exhibition spaces? How does curatorial praxis provide a framework for making art through an extended, affective bond of commitment and friendship? These are some of the questions that are raised by Millet Matrix.

As an adjunct to Desnoyers' needlepoint practice, the commissioned work Millet Matrix as well Tomas' artistic interventions in the third exhibition introduced a potential mutation in Desnoyers' work, exploring the limits and possibilities of transcultural curating. A conceptual work by Desnoyers that is unique to this book completes the presentation. 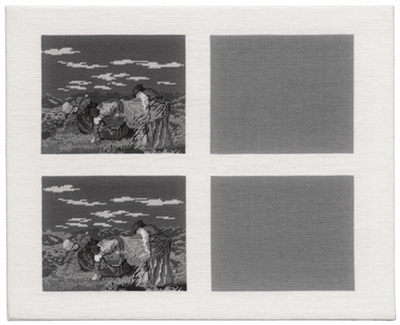 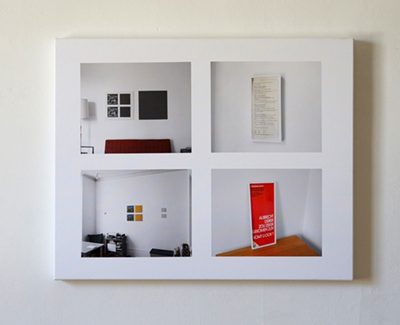 “Millet Matrix first appears as a catalogue documenting a conventional curatorial collaboration, but ends up as a much more complex series of theoretical propositions. Like most innovative curatorial projects, it moves around, oscillates and points the reader in all sorts of processual directions. Part exhibition, part co-operative structure, and part research project, this book breathes with ideas. Its abundant approach relishes its own contradictions. From Mary Linwood to Mary Cassatt to Sol LeWitt, and from transculturalism to programming language, temporal transgression, and our erroneous history to name but a few points of departure, the reader is taken to somewhere unforeseen. It is a book that constantly turns.”

– Paul O’Neill, author of The Culture of Curating and the Curating of Culture(s)

Rosika Desnoyers is a graduate of Concordia University’s Humanities Doctoral Program, Centre for Interdisciplinary Studies, where she completed a thesis in research-creation titled A Genealogy of Berlin Work: A History of Errors (2012). Since the 1990s she has worked with needlepoint as a means to explore the social function of art as a disciplinary formation. She has exhibited her work at SAW Gallery in Ottawa, at Galerie Diagonale in Montreal and at the Leonard & Bina Ellen Gallery, Concordia University. She has also worked in several museums, including the National Gallery of Canada, the McCord Museum and the George Eastman House, International Museum of Photography.

David Tomas is an artist and writer whose multimedia and photographic works explore the culture and transcultures of imaging systems. He has exhibited in Canada, the US and Europe and has held visiting research and fellowship positions at the California Institute of the Arts, Goldsmiths College, and the National Gallery of Canada. He is the author of several books, including Transcultural Space and Transcultural Beings (1996), A Blinding Flash of Light: Photography Between Disciplines and Media (2004), Beyond the Image Machine: A History of Visual Technologies (2004), and more recently, Escape Velocity: Alternative Instruction Prototype for Playing the Knowledge Game (2012) and Vertov, Snow, Farocki: Machine Vision and the Posthuman (2013). Tomas is Professor in Visual Arts at the Université du Québec à Montréal.

Marc James Léger is an independent scholar based in Montreal. He is editor of the collected writings and interviews of Bruce Barber in Performance, [Performance] and Performers (2007) and Littoral Art and Communicative Action (2013), as well as editor of Culture and Contestation in the New Century (2011) and The Idea of the Avant Garde – And What It Means Today (2014). He is author of Brave New Avant Garde (2012), The Neoliberal Undead (2013), and most recently, Drive in Cinema: Essays on Film, Theory and Politics (2015).